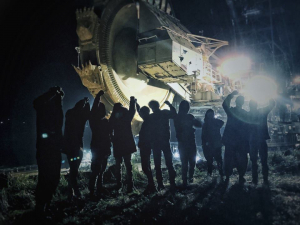 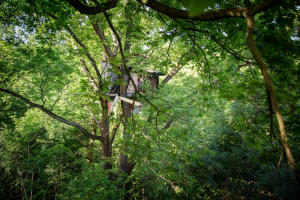 What’s all this about?

The Hambach Forest, which one could call the last “primeval” forest in Central Europe, is being stubbed for Europe’s biggest climate pollutant – the Rhenish lignite mining area of RWE (Rheinisches Braunkohlerevier), in which RWE mines brown coal. Whole villages and the health of human beings are destroyed in this process.
To prevent all of this we squatted the Hambacher Forest and take part in other effective and direct Actions. Join us!
The Hambach Forest was and is one of the most naturally growing forests in Central Europe. It exists continuously for 12000 years. Before the beginning of the mining, it covered an area of 5.500 hectares, the largest forest of the region between Cologne and the Netherlands. Today, only 1.100 hectares are left, as the rest was cut down by RWE to mine lignite. If we do not stop RWE, the same thing will happen to the remaining forest.
The conflict is not only about the forest though, but also about the climate, our health, resettlement, and about the question: “Who decides?”

The open mine (Hambacher Tagebau) located now where the other part or the forest grew before is part of the Rhenish lignite mining area, the biggest mining area in Europe. This mining area is also the biggest single emission source of CO₂ in Europe. It produces more fine (respirable) dust than all traffic in Germany. This dust has a very negative influence not only on people in close surroundings, but also in Cologne and the Ruhr area. Especially because this fine dust is radio active. Not only the forest but even whole villages are destroyed for the open mine (Hambacher Tagebau).

On April 14th of 2012 the Hambacher forest was squatted by coalmining-opponents. In November it took 4 days for 600 police woMen to evict the first squat. Since the eviction, there exists the second squat on the side of the forest. Not only do we want to protect the forest, we also want to ask the question: “What
do we want our economy to look like in the future, if we do not want to destroy the
climate of this planet?” Burning fossil fuels shurely can not be one of our answers. An economic system that
is based on a need to grow and that does not regulate its productivity according to
peoples needs is not one of our answers either.
Come and join us! Take part! 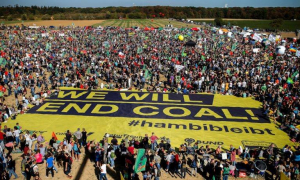 50,000 Celebrate Stopping of Cutting While Forest Reocuppied and diggers blocked.

The demonstration that was banned by the police (but the ban was lifted again by the court of Aachen, EIE) attracted over 50,000 people celebrating the second year in a row when cutting has been legally blocked by Bund (German Friends of the Earth) court case as well by thousands of activists turning up to defend the forest and resist RWE opencast mining. 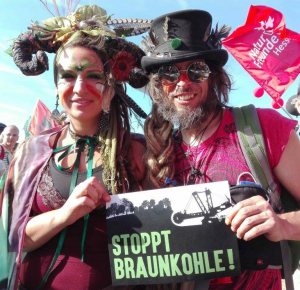 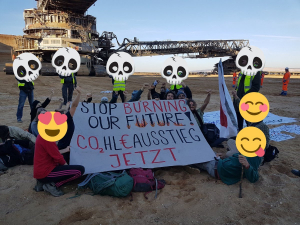 With the cops now again below the 3000 (in numbers, EIE) in the forest and with activists determined to reoccupy after so many tree-house have been destroyed, thousands walked into the forest and re-liberated 5 locations from RWE’s climate killing grasp, building new treehouses and platforms and took part in an Ende Geleande action walking to the very edge of the mine and blocking a 15-story tall coal digger through out the day and into the late night hours. Roads through out the forest have been re-barricaded again, often with whole platoons of cops standing by, who seem not to interfere, until their numbers are at least twice or three times greater than the unarmed* activists. (*armed however with the desire for a world in which ecosystems, communities and climate is not collapsed in the name of profit & exploitation)

This unprecedented in the size of the crowd demo while being organized with the help of NGOs such as Compact, Bund, Greenpeace and Buir fur Buir brough international attention to the struggle, also gaving voice to Hambi struggle representatives. It was also a reminder of the the diversity of the struggle with over 12 decorated with anti coal-mining and anti RWE slogans, banners and installations tractors joining the celebrations. The farmers also were welcomed on stage and communicated numerous coal related issues such as massive crop failure, disappearance of ground water and destruction of last forest habitats needed for stabilization of local and global ecosystems.

The diversity of the struggle was also visible at every step with costumes, theatrical and musical performances celebrating the recent victory.

This is just another beginning, one that signifies not an end of the struggle still not being in sight as this is only a postponement of the of cutting of the Hambi and of the so long promised Coal Exit. Expropriation of land and RWE coal emissions continue unstopped, coming even closer to Hambi Bleibt Struggle with forced expropriation of the Meadow support camp moving forward with a call for decision whether occupants will stay and face eviction or will leave voluntarily having to be made by October 10. Until then and long after many in the forest intend to continue the struggle by continuing to protect and defend precious Hambacher Forest and local communities from RWE Extreme Energy Lignite. Blocking its greedy and destructive agenda with new platforms and treehouses such as those below from Green Frieda:

To the thousands who were in the forest and on its edge today who might be reading this: Please keep in mind that the Forest can only be saved if this engagement continues and the supporters continue to stream into the forest, organize local and global actions and fighting for Climate Justice in and for Hambi and around and for the Planet. 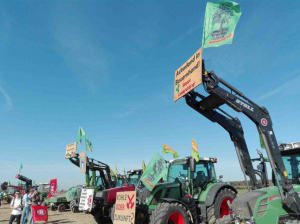 An excavator of RWE was blocked for 27 hours in the open pit mine at the edge of Hambacher Forest. Nobody was charged after the action ended, the activists returned in the forest. The text below was written before the action ended yesterday afternoon.
Originally published by Hambi Bleibt. Written by Anarchist Press Service Hambi. Image above by @HambiBleibt.

Note: Enough is Enough is not organizing any of these events, we are publishing this text for people across the US and Europe to be able to see what is going on and for documentation only.

Currently an excavator of RWE is blocked. On 6.10.2018 activists near the bucket wheels forced the excavator driver to stop the machine. Today on Oct.7th about 11:00 am the police tried to cordon off a wide area around the excavator. The fire department is talking to the activists. An eviction of the occupation is not in the sense of the police because of the proximity to the edge of the dug slope.

The resistance, the creativity and the determination of the many different people shows that the police and RWE have lost the fight for the forest not only politically but also right now. To keep it that way, the fighting must be extended and carried to the cities, against the shareholders of the RWE Group in order to defend and secure the achievements and new tree houses. The police are astonished and appalled by the energy with which the forest is taken over again and again. Also on weekdays the citizens are invited to make forest visits to support the anarchists and forest people in the forest.