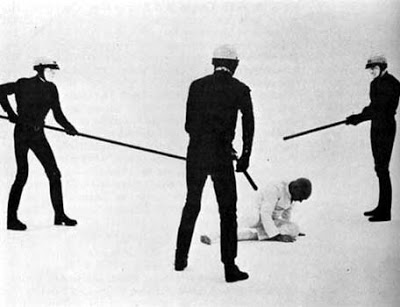 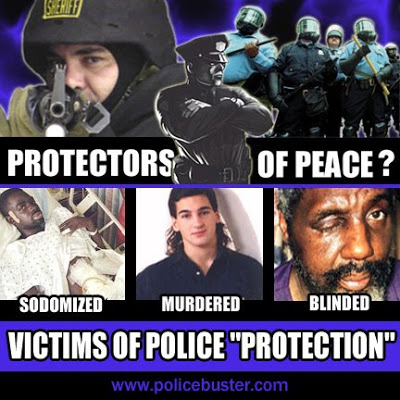 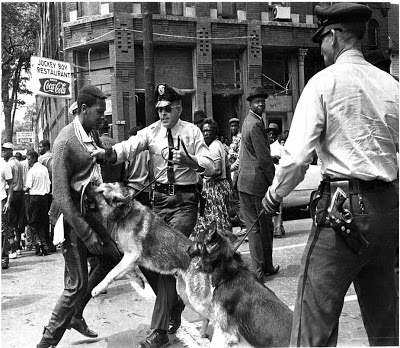 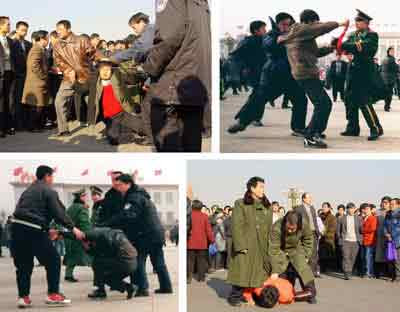 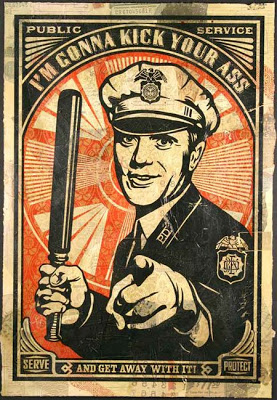 In the aftermath of Congressional approval of bailout legislation granting sweeping powers to the financial elite, the body politic appears to be helplessly mired in the relentless unfolding of classical fascism before its very eyes.
Coming to terms with this terrifying predicament can benefit from a primer that renders naked the forms of raw power used by the global elite in advancing its agenda for full spectrum dominance. This will enable us to determine if we are in fact helpless and to use care and deliberation in finding the means to take our power back.
In his seminal book Arms and Influence, Thomas C. Schelling addresses the comparative efficacy of brute force and the power to hurt in influencing or controlling others.1 A classic example is the application of American power to achieve the unconditional surrender of Japan in World War II: continuing to use brute force to overcome Japanese military forces and occupy Japan (as the Allied Forces had done in Germany) was deemed far more cumbersome than terrorizing the Japanese through the use of atomic bombs against two civilian targets. This use of the power to hurt, with the implicit threat of its further use on a wider basis, got virtually immediate results.

The application of these two sources of power by the power elite is not hard to find. With respect to brute force, it is no secret that the US military has been training and arming state and local law enforcement across the country, including supplying some of the same weaponry used in a war zone against an external opponent. Even more alarming, the 3rd Infantry Division’s 1st Brigade Combat Team Unit, fresh from action in Iraq and having access to both lethal and non-lethal weapons, including tanks, has recently been assigned to a 12 month tour of duty for domestic security operations.2

Regarding the power to hurt, as the populace witnesses the official acceptance of torture, as well as the increasing brutalization of ordinary citizens (e.g., the use of taser guns to inflict massive electrical shock and even death), it inevitably adopts a mode of self-protective retrenchment or “self-censoring.”

In a pervasive climate of fear, protest and dissidence become less and less likely, and the march to a full-blown police state is thereby facilitated. Among the most blatant applications of the power to hurt, used as a form of terrorist manipulation, have been the elite’s obscene threats of a massive depression and nationwide martial law in the service of its bailout legislation.

But in addition to brute force and the power to hurt, the elite uses another form of power that is chilling in its efficacy: sophisticated techniques for controlling information and, more generally, for controlling the perceptions and behavior of the populace through mental and emotional manipulation of the very reality it experiences.
Elite control of the media extends beyond manipulating the news that the public receives to molding public opinion and behavior by means of media advertising and entertainment. Examples range from sponsorship of the TV show 24, which attempts to legitimize “enhanced interrogation techniques” (the sanitized phrase for torture), to manipulative TV commercials showing stars cheerfully accepting personal identification technology that smacks of Big Brother. The elite cabal exploits its control over media and entertainment to keep the public misled, distracted and ultimately imprisoned in a matrix of disinformation, rampant consumerism and the lowest common denominators of human nature, including raw violence and mindless sexuality.
In a renowned speech given in Berkeley in 1962, British writer Aldous Huxley contrasted his dystopic novel Brave New World with George Orwell’s novel 1984, written just after the collapse of the Hitlerian terror regime and while the Stalinist terror regime was still in full swing.3 In Huxley’s view, 1984 was “a projection into the future of a society where control was exercised wholly by terrorism and violent attacks upon the mind-body of individuals,” whereas his own novel addressed “other methods of control…probably a good deal more efficient.”

“We are in process of developing a whole series of techniques which will enable the controlling oligarchy…to get people to love their servitude….There seems to be a general movement in the direction of this kind of…a method of control by which a people can be made to enjoy a state of affairs by which any decent standard they ought not to enjoy.”

Huxley’s concerns about the newly available non-terrorist techniques for “inducing people to love their servitude” were echoed by Nobel Prize winner Bertand Russell, who predicted that as a result of the gradual and ruthless use of technological advances, “a revolt of the plebs would be as unthinkable as an organized insurrection of sheep against the practice of eating mutton.”4

A powerful form of psychological control used by the global elite is to induce widespread depression stemming from a feeling of futility or helplessness. This brings to mind the famous quote from Thoreau that most humans live “lives of quiet desperation,” which he elaborated on by stating that “what is called resignation is confirmed desperation.” It also brings to mind the concept in clinical psychology known as ‘learned helplessness’.

The phenomenon of learned helplessness was discovered through psychological experiments in 1967 by Martin Seligman and Steve Maier. A group of harnessed dogs was given painful electric shocks, which they could end by pressing a lever. Another group received shocks of identical intensity and duration without a means to stop them. The dogs who could stop the pain recovered from the experience quickly, but those who could not learned that they were helpless and exhibited symptoms similar to chronic clinical depression: when they were put in a shuttle-box apparatus in which they could escape electric shocks by jumping over a low partition, most of the dogs just lay down passively and whined rather than trying to escape the shocks.5

Another powerful from of elitist mind control is to create dependency on authority figures through “shock and awe” techniques. In her brilliant work on the “shock doctrine” of disaster Capitalism, Naomi Klein argues that it is the knowledge of human nature gained through the application of torture techniques by intelligence agencies that has infused the broader mind control strategies of the disaster capitalists.6
In the CIA’s basic interrogation manual declassified in 1963, for example, a window of opportunity is highlighted in which torture reduces its victim to a state of traumatized disorientation and childlike regression, creating an opening for the interrogator to be transformed into a protective father figure. This is one of the classic tactics of tyrants across the planet. In the view of Klein and others, it was used after the shock of 9/11 to create a national lens of perception within the overall control matrix, a kind of template to be used by the mind to reflexively process all relevant concepts in terms of the ‘war on terror’.

Klein sees the solution as contained in the problem: as we gain awareness of the same pattern playing out again and again, we can become prepared for the next shock and its exploitation by disaster Capitalists:

Despite the apparent setback of the new bailout legislation, I share Klein’s confidence in our ability to overturn the psychological impairments resulting from shock and awe tactics. More generally, I am optimistic about reversing the spectrum of impairments grouped here under the rubric of psychological control. Even cases of severe mental disorders induced by the horrific CIA mind control program known an MK Ultra have been healed, in a benevolent use of a technique known as reverse engineering.
As a practitioner in Complementary and Alternative Medicine (CAM), I have become personally familiar with extraordinary new techniques for healing previously intractable syndromes such as learned helplessness and war-induced post-traumatic stress disorder.
As an educator who has worked with children and adults with cognitive disabilities, I have seen next to miraculous results from the innovative methods now available.
And, finally, as a human being who reveres the human spirit and its perennial indomitability, I refuse to believe that a small cabal of beings solely in service to self will ever be able to take over the minds and souls of mankind.

As our best minds address the hair raising elitist victory represented by the bailout legislation, I encourage their deconstructing just how this criminality managed to succeed by tracing its origins in history in terms of the threefold model of power given in this article. In my own view, the current crisis is a crisis in the Chinese sense of the term, i.e., an opportunity in disguise. Because the crisis is rightly perceived as a conflict between Wall Street and Main Street, as an incongruence between the actions of government and the political will and best interest of its constituents, and more generally as a power grab by authoritarian capitalism that is in full daylight for all to examine, it is an opportunity like no other for educating the populace. It is an opportunity like no other to awaken and educate the people so they are no longer sitting ducks for the three forms of power delineated in this article. Especially the third: history abounds with examples of how the first two forms of power lose their hold, indeed in many cases back off, when confronted with a people who value the quality of life over life on any terms, a people who will go to any lengths to protect their basic rights as human beings.

It is that spirit that infused the birth and early life of our Republic. I am betting that it is still alive and well in America.

7. Keith Olbermann interview with Naomi Klein: “Iraq Is the Classic Example of The Shock Doctrine

” December 2, 2007
Judith H. Young, Ph.D., has a B.A. and an M.A. in Philosophy and a doctorate in Political Science (Brandeis University, 1973). In the 1960s she was a published think tank researcher with a Top Secret security clearance in the areas of arms control, strategic studies and international aerospace activities.
In 1973-74 she taught International Politics at Mount Holyoke University in Massachusetts.

In the 1990s Judy became a practitioner and teacher in several venerable healing arts, including animal-assisted therapy and traditional Reiki. She founded a nonprofit animal and nature center dedicated to promoting the healthy development of children and youth, which she directed from 1994-2004, and she published widely in the field of equine-assisted activities and ecotherapy. After the shocking events of 9/11/2001, Judy returned to her earlier vocation as a writer and educator in the field of International Politics, while also maintaining a professional practice in complementary and alternative healing.

This article we found originaly in Axis of Logic: