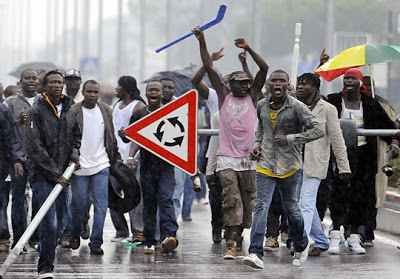 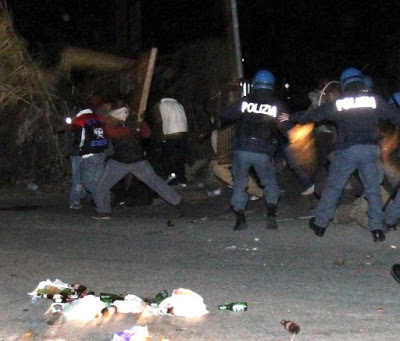 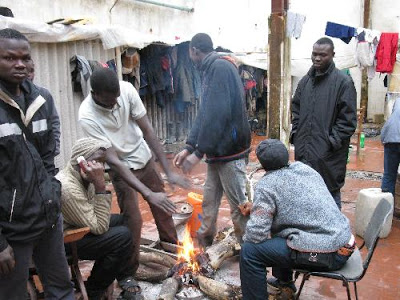 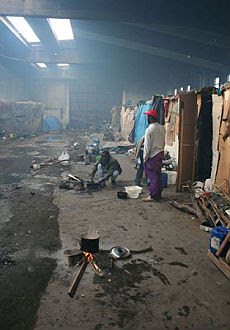 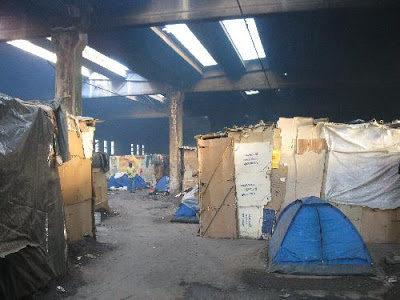 Day after day all people of this world understands that in our days Italy is the worst fascist regime of Europe. The streets are controled by fascist gangs promoted by the government to produce fear to the immigrants and control the public space from any kind of opposition that comes from autonomists, leftists, anarchists or freaks. Day after day Italy becomes like a volcano, ready to explode. The new generations that comes, the young people, the immigrants, the excluded people, the victims of daily police brutality, the victims of Italian State fascism will arise soon…and, then…Nothing Will Remain Same in Italy… We wish the desperate voice from the riots of the immigrants in Rosarno, Calabria will be just the beginning of a general social explosion in Italy // Void Network

article from N.Y. Times:
http://www.nytimes.com/reuters/2010/01/08/world/international-uk-italy-riots.html
ROSARNO, Italy (Reuters) – Thousands of immigrants protested against racism in a southern Italian town on Friday, after a night of rioting that was sparked by an attack on African farm workers by a gang of white youths.
In one of Italy’s worst episodes of racial unrest in years, dozens of Africans in Rosarno, in the Calabria region, smashed car windows with steel bars and stones and set cars and rubbish bins on fire late into Thursday night.
Police said at least one car was attacked while passengers were inside — several of whom were injured.
The immigrants, who also blocked a road, clashed with police in riot gear. Some 15 were arrested and 20 were injured.
The incidents took place after white youths in a car fired air rifles at a group of African immigrants returning from work on farms, injuring two of them.
On Friday morning some 2,000 immigrants demonstrated in front of the town hall to protest against what they said was racist treatment by many locals. Some shouted “we are not animals” and carried signs reading “Italians here are racist.”
Scattered acts of vandalism by immigrants continued on Friday morning as some smashed store windows.
Schools were ordered closed as tensions remained high. One white resident fired live ammunition in the air from a terrace, local media reported.
Interior Minister Roberto Maroni ordered more police into the area and set up a task force to look at what caused the violence.
A smaller riot by immigrants broke out near Naples in September 2008.
Maroni, from the far-right Northern League party that is a junior partner in Silvio Berlusconi’simmigration had been “tolerated all these years.” government, sparked controversy when he said one of the causes of the violence was that illegal
Opposition leader Pierluigi Bersani accused Maroni of raising tension in the area.
“Maroni is passing the buck … we have to go to the roots of the problem: Mafia, exploitation, xenophobia and racism,” Bersani said.
Immigrants work in the area as day labourers picking fruit and vegetables. Some 1,500 live in squalid conditions in abandoned factories with no running water or electricity and human rights groups say they are exploited by organised crime.
Calabrian regional governor Agazio Loiero said while the action of the immigrants was totally unjustified, he acknowledged there had been “a strong provocation.”
Italy has taken a hard line against illegal immigration and has moved to stem a tide of boatloads of immigrants who try to arrive on its southern shores from Africa. Some boats have been turned back on the open seas.
(Writing by Philip Pullella; editing by Robin Pomeroy)
for much better understanding of the fascist regime that rules Italian society please read:

http://news.bbc.co.uk/2/hi/europe/8170187.stm http://news.bbc.co.uk/2/hi/europe/8132084.stm
+
important articles from last year about the desperate life conditions of the immigrants in Rosarno / Calabria (in Italian language): http://fortresseurope.blogspot.com/2006/01/arance-amare-reportage-da-rosarno-tra-i.html
http://onoratasocieta.wordpress.com/2008/12/20/ndrangheta-e-tratta-migranti/