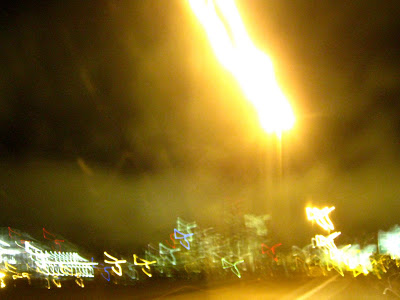 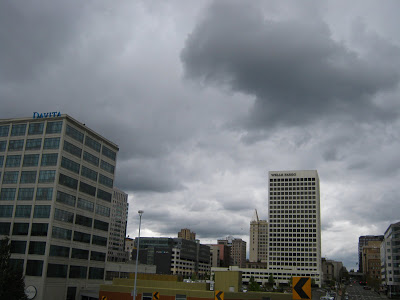 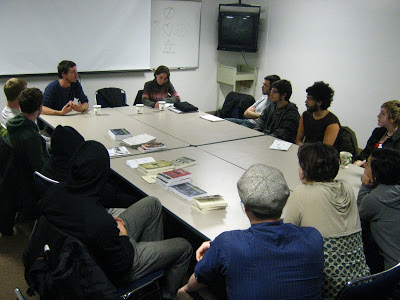 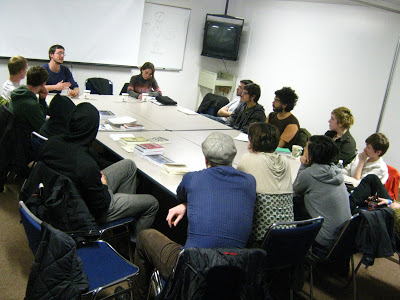 The anarchist space in Tacoma is small but wild… The comrades there are uncompromised and committed to the social war as in few places. They prepare a typography laboratory that will have major influence in West Coast for the creation and wide spread of free distributed counter-information in the form of political flyers, pamphlets, zines, communiqués, invitations for demonstrations and assemblies, neighbourhood assemblies, student struggle e.t.c., a strategy that we believe it will have amazingly important role to the expanding and the high visibility of the anarchist movement in the near future in amerikkka. Our friends and comrades in Tacoma publish the magazine Autonomy 253 [http://autonomy253.wordpress.com/ ] and run a great blog Utopia or Bust where you can find possibly the best review until now about our talk in Tacoma, two and a half hours of strategic organizing and sharing of experiences and inspiration:
http://utopiaorbust.wordpress.com/2010/03/30/theory-high-is-the-best-high/
There are a lot of interesting political, social and cultural projects in Tacoma and we hope you will be inspired by them starting your own group or turn your company of friends in a insurrectionary cell of Life, Love, Chaos & Total Freedom
There are plenty of beautiful and inspiring things happening in every city. There are comrades in your very own city, everywhere. Look around you…Understand the illusions of the people and fight against them….Hear the fears, the hopes and the needs of the people around you and fight on their side…Make them feel the benefit of your fight….Participate, Take Initiative, Act, Spread your Influence!
Below is a short list of some places in Tacoma you will find each other, like a directory, like a signal, an invitation:
253HipHop, online source for underground hip hop artists in the Tacoma area.
2nd Cycle, bicycle-repair collective located on Martin Luther King Jr. Way in Tacoma. Run by comrades.
A&R//T, anarchist zine distribution based in Tacoma.
Alano Club, downtown music recording studio not bent on making Tacoma artsy, but just making good fucking music and spreading the chaos.
Autonomy//253, anarchist anti-authoritarian journal based out of Tacoma, for a Tacoma regional audience.
Coffee Strong, the only coffee shop in the 253 (so far) you’ll find anarchist flags and radical ex-military bad asses drinking coffee and throwing sick ass hardcore parties. Located in Lakewood, WA.
Critical Mass, the Tacoma bike ride that happens every last Friday of the month.
Demonstrate! 253, online space for finding out what’s going on in the area.
Highwayman Press, Tacoma-based anarchist book publisher.
Hilltop Quickies, radical family-owned sandwich shop on the Hilltop, Martin Luther King Jr. Way.
King’s Books, Stadium District bookstore that supports the Anarchist Bookfair and is generous with their space.
Pitchpipe Infoshop – the anarchist infoshop project and collective house that used to be located on Martin Luther King Jr. Way in Tacoma before being shut down by the police on New Years Day, 2010.
South Sound Indymedia, an underground newswire for the South Puget Sound.
Students for a Democratic Society, Tacoma, SDS chapters moved on. Now their website is a newswire for Tacoma events, articles, and actions.
Tac-25 Collective, the artists who sponsor such events as Artlatch.
Tacoma Anarchist Bookfair, for three years Tacoma anarchists have organized a the anarchist bookfair.
Tacoma Dharma Punx, radical meditative group based out of Pacific Lutheran University.
Food Not Bombs, the autonomous chapter of FNB supporting various projects around the city.
Tacoma Industrial Workers of the World, the Tacoma chapter which has been around for a long, long time, and still organizing amongst us for the one big union.
Tacoma Smash I.C.E., group that once organized against ICE and the Northwest Detention Center, Tacoma.
Tacomic, Tacoma’s only amateur-anarchist, open-source, hyper-local political cartoon of destiny.
Unmanageable & Amiable Outlows Histories of unmanageable outlows
Utopia or Bust, active anti-authoritarian anarchist blog based out of Tacoma.
The list comes originaly from Autonomy 253 :
[ http://autonomy253.wordpress.com/]
To add to the list, leave a comment or email :
autonomy253@gmail.com
Tags: Autonomy 253 Tacoma Utopia or Bust void network we are an image from the future Chaos Love Insurrection