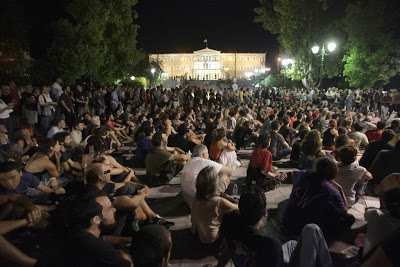 The same night of the attack of Police the Direct Democracy Public Assembly
took place in 21.00 o clock as every night and decided demontration against the mayor of Athens mr. Kaminis that invited the Police to destroy the camp of the people infront of the Greek parliament 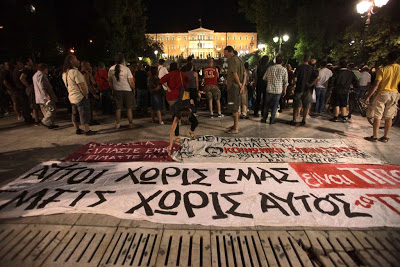 Without Us They Are Nothing / Without Them We Are Everything! 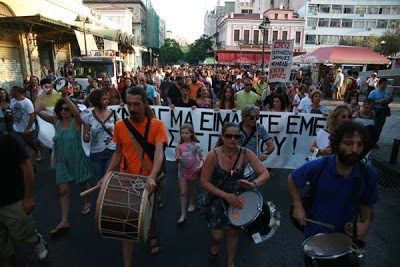 At approximately 4.15 a.m. on Saturday, 30.7, heavy riot police forces entered Syntagma square (Parliament sq. / Athens Greece that had been occupied from 23 May, destroying and removing the tents that where set up there. At least eight people were arrested. This follows the order by attorney general Eleni Raikou for the tents at Syntagma and the “promise” of mayor Kaminis that the tents at Syntagma would be removed within days, as they tarnish Athens’ image during the tourist period.
The people re-occupied the Square and the Square replied immidiately:
They Came, Like Thieves in the Night
– Gathering at Syntagma square at 6pm

The Square is Us and We Are Everywhere
General assembly at Syntagma Square 6:00 o’clock.
Like thieves, who fear the people’s outcry and public shame, The police forces entered the square at 4 am.
The district attorney and work crews of the Municipality of Athens invaded the square, and began a wholesale destruction and removal of tents and the infrastructure of the various work groups of the square. They then took 13 people into custody from which 8 are now considered arrests.
We condemn the ban on communication of lawyers with those held at the police station in Omonoia. (For this reason, there is no clear picture of the number of arrestees or who they are).
Activists who were present, in resistance to the annihilation of the square, saved what material they could and took videos of what was happening, scenes which make plain that we are living under a cowardly democracy and a justice system that functions on the basis of the law of the jungle.
Let them realise the obvious truth;
The square is all of us, thousands of ordinary people who stand up to a cynical, antipopular, antidemocratic, corrupt economic and political status quo. A status quo, that in desperation, facing its own failure, is trying to save itself in any way possible.
We will not become its victims.
We do not fear, we do not submit.
We inform them that they are fooling themselves if they think that “cleaning” and making a fortress of Syntagma square, they will protect themselves. There are tens of squares now all over Athens, with their own general assemblies, hundreds of squares all over Greece. We are in every neighborhood, along with every citizen of this country.
We are the millions of society set against a handful of corrupt and subservient minority who try to pretend they have strength by using the police, mercenaries of the power elite.
We are everywhere.
Whatever they do they cannot makes us leave. The streets and the squares, like jobs, productive structures, the wealth of this country and our rights belong to us. They are not for sale. We will continue to demand their return to the people.
we have said it before and we say it again:
we will not leave until they do.
Everyone at Syntagma Square today Saturday 30th of July at 6 p.m.
The terrorism of this dictatorial goverment, the imf and memorandum, shall not pass.
You do not scare us. You infuriate us.
We continue the fight peacefully, with determination and creativity.

Void Network invites all friends and activists around the world to express their Global Solidarity and organize the Global Movement of Direct Democracy.
We invite all people to organize Direct Democracy Public Camps and People’s Assemblies all around the world, to all cities, neighborhoods and villages of this planet.
We invite all people to take back the power on their hands, to prepare for long and hard Global Struggle Against Totalitarianism, Exploitation, Alienation and Stupidity
We invite all people to express their Rage and Creativity in horizontal, non hierarchical, open, all inclusive, antiauthoritarian, direct and emancipatory Public Assemblies, creative groups, working groups, thematic groups and initiatives that WILL CHANGE THE WAY WE FIGHT, WILL CHANGE THE WAY WE THINK, WILL CHANGE THE WAY WE ORGANIZE OUR STRUGGLES, OUR DREAMS, OUR PLANS FOR THE FUTURE!
WE ARE AN IMAGE FROM THE FUTURE!
We invite especialy all our friends and commrades in New York to participate in the Occupation of Wall Street in 17 September 2011 [ http://www.adbusters.org/blogs/adbusters-blog/occupywallstreet.html ] and we spread our invitation for the creation of Direct Democracy Camps and Public Assemblies all over United States of America the same date.
The open, public invitation to people from all kinds of economic and cultural backgrounds, people from all nations, all colours, all genders to participate in Assemblies all over U.S.A. will offer a great empowerment for all people to express themselves in public, to demonstrate their fears, their dissapointments, their needs, their dreams and organize their resistance against the destruction of our lives, against the destruction of the Nature, against the destruction of our communities, against the destruction of our FUTURE

You can hear also a 2 hours interview of participators of  the Direct Democracy Camp and Public Assembly of Syntagma sq. / Athens Greece taken by the cultural activists from 16 Beaver Group New York about HOW TO ORGANIZE AN OPEN PUBLIC CAMP AND PEOPLE’S ASSEMBLY
People that participate in different open groups (like the Group of fascilitators and secrateries of the Assembly, Technical Support Group, Art Group, Internet Group e.t.c.) speaking about practical ways and methods offering ideas, sharing experiences, problematics and dangers to avoid for organizing Direct Democracy Public  Camps and Assemblies all around the world.
This conversation is an attempt to open up the process of the General Assemblies taking place in Athens on Syntagma Square, like an engine, in order to understand how it developed, and how it works. It touches on the problems they have faced, the barriers of having fixed ideological agendas, the question of restricting media access, of formulating respect, creating the form for a new political speech, drawing lots, voting, making resolutions, taking collective actions, establishing different thematic groups, working groups, allowing conflict and arguments, constructing a non-representative political agency, avoiding demands, ….