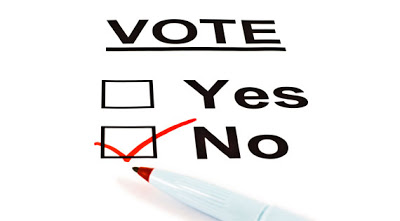 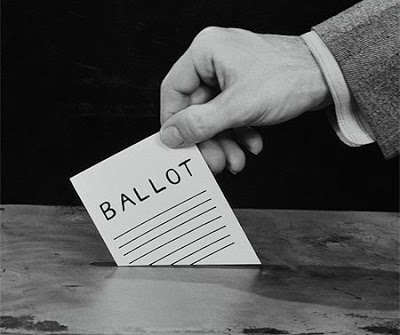 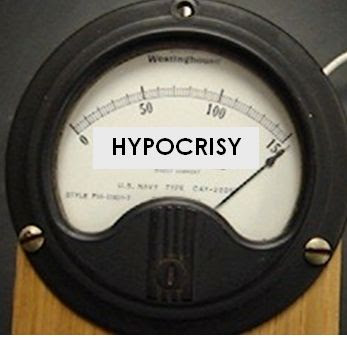 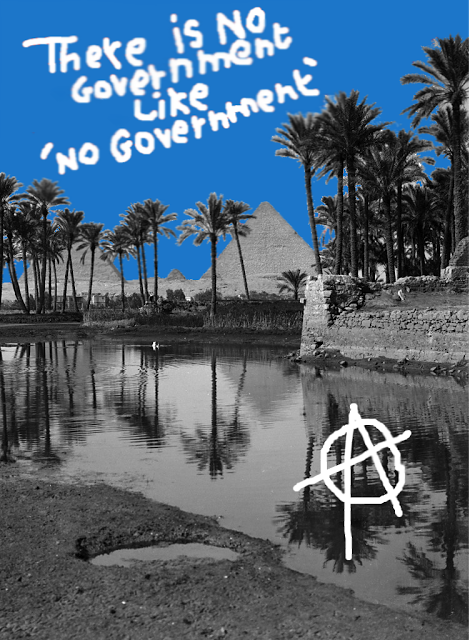 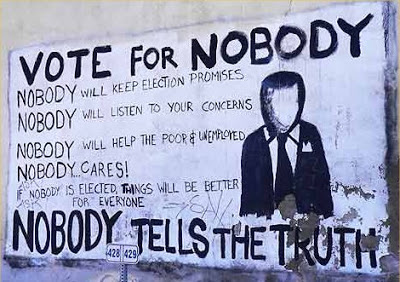 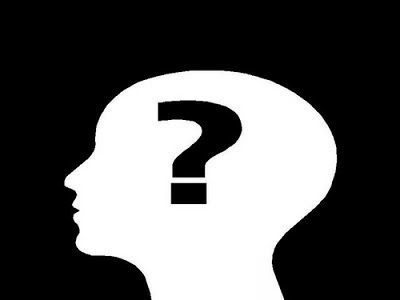 Occasionally, the liberal-democratic system nobly affords us the chance to select our representatives from a shallow gene-pool of political management professionals. Save for this transient moment in the ballot booth, we’re separated from the exclusive franchise of governance altogether – voting is our only momentary and tenuous connection to the establishment. Best to leave power and responsibility up to the professionals; the experts, the think-tanks, policy-wonks, lobbyists and journalists. Just like any other specialised industry, with its own internal contradictions and power-relationships, the ‘political class’ is not a homogenised elite, united in a conspiratorial desire to oppress, control or get rich, but all of the actors in the political spectacle are moulded from the same clay.

You see it as they slither through primaries and caucuses, TV spots and talk shows, ‘serious’ interviews and light-hearted features in glossy magazines, vying for the approval of a populace that has long since lost interest and learnt to take everything they say with a pinch of salt. The very existence of centralised government necessarily prefigures an exclusion, a separation, a surrendering of power for those who are not part of the political elite.

Decision-making powers are delegated to the salaried statesmen, to be enacted by faceless and impenetrable bureaucracies – apparently the most efficient way to conduct the affairs of a modern, technological civilization – a self-perpetuating, self-propeling cycle of social reproduction, a mechanical propagation of the suited and enterprising class – the partisans of their own careers – in a true technocratic marvel. Their interests overlapping with the needs of capital, each greasing the wheels of the other, they form part of a giant social machine characterised by near total harmony between the state and the propertied classes. This does not presuppose a monolithic conception of government or capital as two united and homogenous units, but the interplay of differing interests within these bodies strengthens their grip on power, their sham plurality is the hallmark of representative democracy.

But no-one in government is arguing over the fundamentals, they come together in a coefficient of affinity with varying levels – the party lines only differ in degree, like a choice between Pepsi and Pepsi-lite. Policy-makers nit-pick over the finer details but preserve the core, and in the wider population, in opinion polls, national elections and everyday conversation, ‘everyone is asked their opinion about every detail in order to prevent them having one about the totality.’ And so we’re left with a set of choices; pointless policy debates over taxation, budgets, bail-outs, bonuses, regulation – everything on the agenda is a set piece of fine-tuning and tweaking but never questioning the legitimacy of the whole – the social machine in its entirety.

The boundaries are immediately set in stone and the possibilities limited, all alternatives positioned very much within the system, mounted comfortably within the discourses of the big government ‘left’ or the arch-capitalists of the right, until the most ardent anarchists start smashing windows in the name of welfare-statism – the strange spectacle of a black bloc protesting against government spending cuts. It is this reciprocity, the binary antagonism between two models of capitalism that furnishes the system with its ability to evolve, adapt and flow through crises and traumas. It is a mutually beneficial false opposition, a false dichotomy between interconnecting forces that are always the same in essence.

Wasn’t the enfranchisement of the workers meant to herald a period of parliamentary socialism, even proletarian dictatorship? Who then could see the dynamics of representation and power? Elections and suffrage are no threat to networks of coercive power and domination, on the contrary, they are complimentary to it; they are its lifeblood and its pacemaker enabling its perpetual flows and transformations, its moral crutch to fall back on and its facelift signifying freedom, choice and liberty. Voting allows the system its pretensions. A great popularity contest to choose our masters, just as we would choose our school’s class monitors to make us more forgiving of the teacher’s cane. But we know the nature of representation; a refined manipulation and a gross con, yielding our own powers and potentialities to gangs of grinning, air-brushed thugs, to administer our own enslavement, to supervise and manage our own disenfranchisement with our mandate and our approval – ‘participation in our own alienation.’

The capitalist social machine has become so omnipotent and omnipresent that it demands our participation. There is no escape when every last corner of the world has been colonised by a tidal wave of nullity. We have no choice but to engage in capital’s grand theatre or live as hermits, retreating into self-indulgent madness. Every time we consume or produce (apparently we now vote with our purchasing power) we are party to the system, we inscribe ourselves on the social apparatus and prolong it further into posterity. The anarchist is no more a pretender in the polling station than in the supermarket. Far from screaming, ‘Rock the Vote’ and ‘Vote or Die’, or even encouraging a pragmatic approach to elections, we are pointing out that we are all collaborators, complicit in the maintenance of established systems of authority, and in our current decrepit situation whether we abstain, spoil the ballot or boycott, we still remain powerless to detach ourselves from capital’s yoke. What is to be done when we are faced, like the French in 2002, with a choice between a fascist and a reactionary old Gaullist? This kind of situation must be left up to people’s individual consciences.

Our dilemma is how to built a decentralised, participatory and horizontal network of power outside the state and representative, mediating institutions and without haranguing, hijacking and recuperating by whatever special interests. This is no mean feat. But there can be no more dead-end election campaigns or membership drives, no more misplaced faith in the ability of government to do things they are incapable of doing, and no more seduction by the public relations men for the one candidate who ‘seems different to the rest’.

*A version of this will appear in the Summer 2012 edition of Fifth Estate www.fifthestate.org