The visit of the outgoing US President Barack Obama to Greece is anything but ceremonial. Apart from the strong symbolic weight of the visit of an American president on the eve of the Athens Polytechnic uprising anniversary (and, what is more, under a self-proclaimed “left-wing” government), the content of Obama’s visit could be actually summed up in the phrase “business as usual”; a type of business, however, that, as we all know, is always stained with the blood of peoples.

Nowadays, the world has nothing to do with the rigmarole on the “end of history” as this was formulated after the end of the cold war in an effort to construct a theoretical explanation of the global autocracy of the US. Amidst the capitalist crisis, antagonisms between imperialisms have turned vast areas of the planet in slaughterhouses, while, at the same time, the advancing capitalism is fiercely attacking the lives of the exploited and oppressed, even in countries where the world of labor has retained until now some of the rights it managed to win in the previous century by means of its own struggles and blood.

The agenda of Obama’s visit to Greece is diverse. First of all, we must not forget that the US is actively involved in the Greek crisis. Ever since the era of Pinochet, and through the IMF, North American capitalism promotes the complete deregulation of the labor market and the frontal attack on employment rights. Given the obvious intention of the SYRIZA / ANEL government to reopen the issue of work, aiming at the final cleanup of whatever is left as a memory of labor unionism, we can easily imagine the results of that discussion.

The main reason of Obama’s visit, however, is none other than the developments in the wider region of the Eastern Mediterranean and the Middle East. The US, after promoting the transformation of the Arabic Spring in a process that suits their plans for the region, after priming the most reactionary jihadist sections like ISIS, have now been engaged in a hopeless competition with other imperialisms (such as the Russian), mainly in the Syrian and Iraqi fronts, as well as in Libya, Yemen, etc. In doing this, they have converted a large part of the Middle East into a field of open warfare with uncertain future. The Greek state, loyal to its commitments to NATO, is directly and indirectly involved in this conflict. The geopolitical balance makes it imperative for the US to stabilize this participation. And, of course, we must not forget the classic trade of weapons between the US and their two best clients in the area, the Greek and the Turkish state.

From our perspective, we don’t have any illusions. We are not against the US imperialism keeping in the back of our mind to ally with any other imperialism. We don’t fantasize “popular” or national fronts of class collaboration against the “external” enemy. What constitutes our enemy as a whole is the reality of global domination, the state, capitalism and imperialism in whatever form or facade it acquires. We are aware that those from the base, the proletarians and the oppressed of this world, have no financial interests in the domination by the state and the capital, regardless of any national or supra / transnational sign; they have no financial interest whatsoever in the escalation of the warfare caused by imperialist antagonisms. On the contrary, what should actually unite them is the struggle for a universal society of freedom and equality, the struggle for libertarian communism.

For this reason we support those struggling against oppression. We stand by the Kurds of Syria with whom the United States are playing a very dirty game, assisting them militarily against ISIS while supporting, simultaneously, the murderous regime of Erdogan who attacks them in every opportunity. We stand by the Palestinians who keep on fighting for their freedom for decades. We stand by all the people of the Middle East, Asia and Latin America who refuse to obey.
But resistances are also developed in the very heart of the beast, the USA. It is not long ago that the big nationwide strikes of the workers in the food supply demanded and won increases of the minimum wage in the sector. Also, The Black Lives Matter movement has been fighting for years against the violence and the murders by the police, and, more generally, against the racial and class oppression that never ceased to be the reality faced by the African Americans.
Also, a great movement has begun to grow in the US prisons, where combining many forms of struggle such as strikes, riots and hunger strikes the prisoners resist the unpaid labor they are forced to provide to private contractors, thereby resisting their transformation into modern slaves. In their turn, the indigenous Sioux have recently unearthed their hatchet of war, determined to resist the passage of a catastrophic oil pipeline through their land. These are only some examples of the struggles of the oppressed in the USA reminding us that the fight against imperialism and capitalism has no national colors, it is not determined by national borders, nor can it be achieved through alliances with the various bourgeoisies.

Today, on Tuesday, November 8, we intervened at the American Consulate in Thessaloniki. This action is an indication of our timely involvement in the protests against the arrival of the US President. We, therefore, invite you all to join us in the streets on the day of Obama’s visit, so as to demonstrate against war, the state, capitalism and imperialism.

LET US UNEARTH THE HATCHET OF THE INTERNATIONALIST SOCIAL AND CLASS WAR
SOLIDARITY IS THE WEAPON OF THE PEOPLES. WAR AGAINST THE WAR OF THE BOSSES

– Members of the ANARCHIST FEDERATION 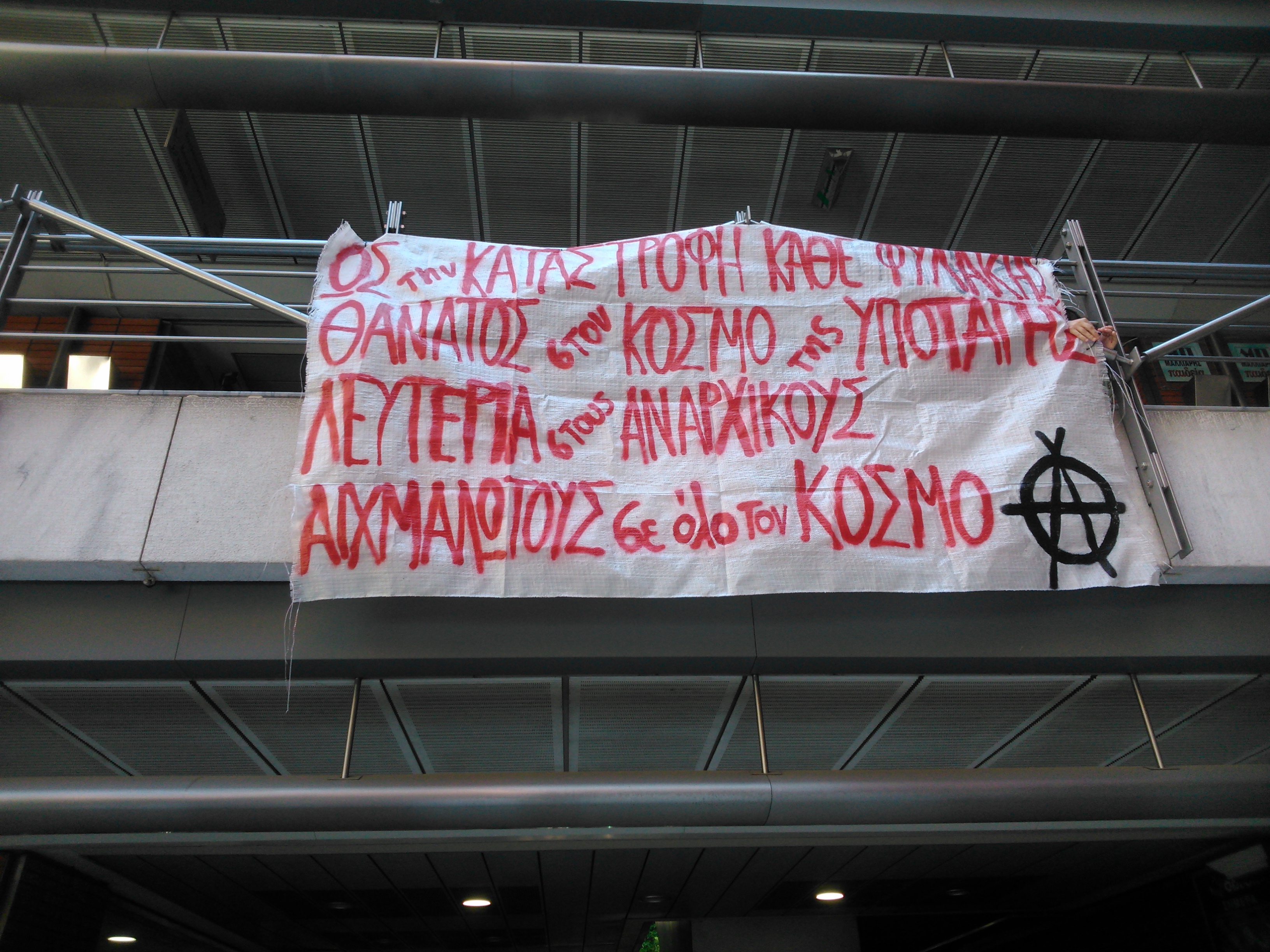 photo: Until the destruction of all kinds of prisons / death for the world of submission /
Freedom for all the Anarchist Prisoners all around the world