No, these are not photos from battlegrounds in Ukraine or Syria—these are from Paris, the erstwhile city of love and light, transformed into another stage for conflict in the aftermath of two years of terror attacks and heightened security and anxiety.

photo 1: Nous Somme le Peule Qui Manque [We Are the Missing People]. Rue de Chaligny. Paris, May 26, 2016. Nearly three months after the first gatherings, the demonstrations became insurrectional. On May 26th, the protesters tried to take an alternative and unauthorized route, but they were caught between two lines of military-armed police who sprayed them with massive tear gas showers. Suffocation and asthmatic crises were reported. © Rémy Soubanère / Studio Hans Lucas 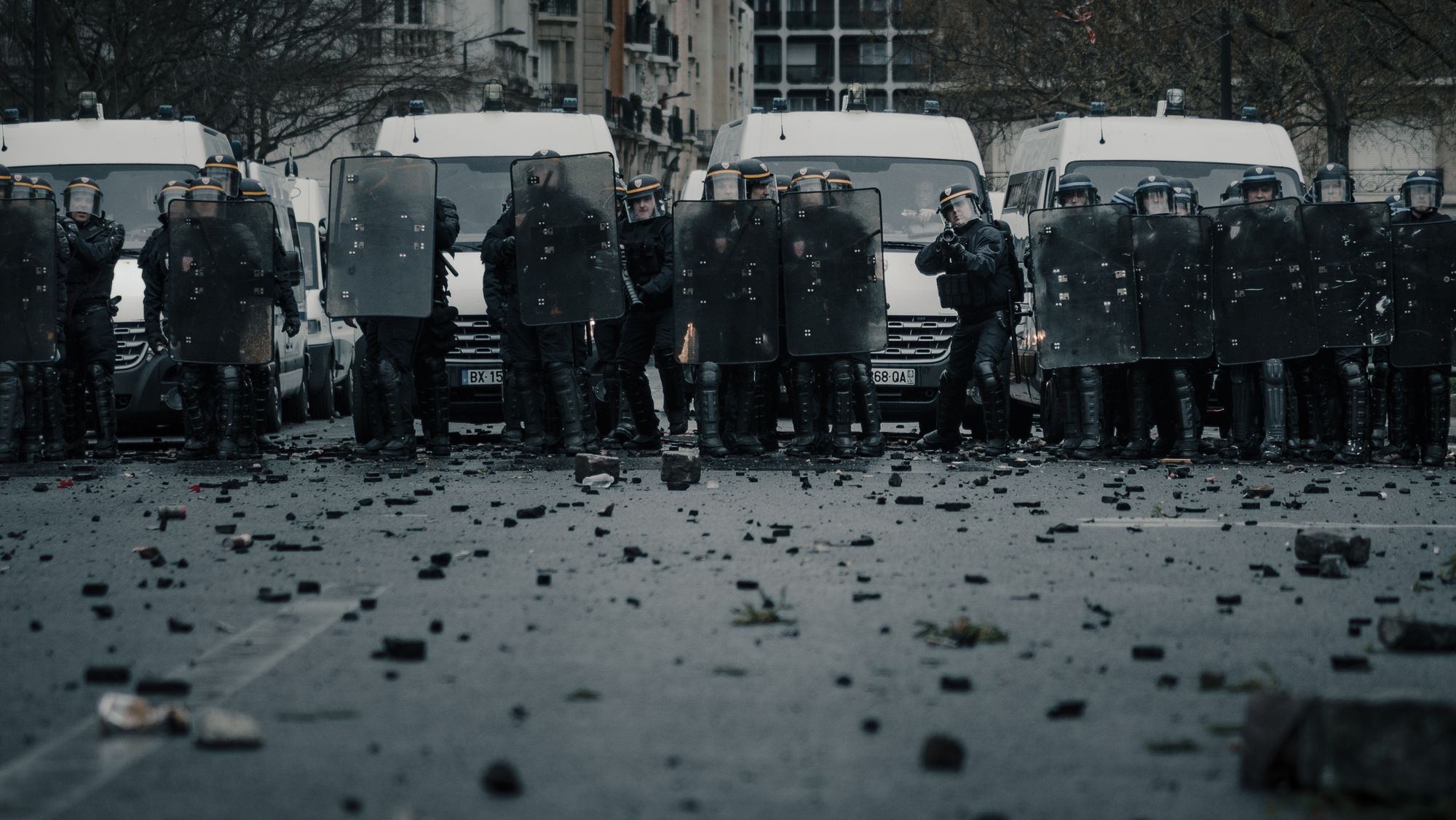 photo 2: Who Shot Who? Paris, April 9, 2016. Even photographers and journalists were targeted by the police. © Rémy Soubanère / Studio Hans Lucas 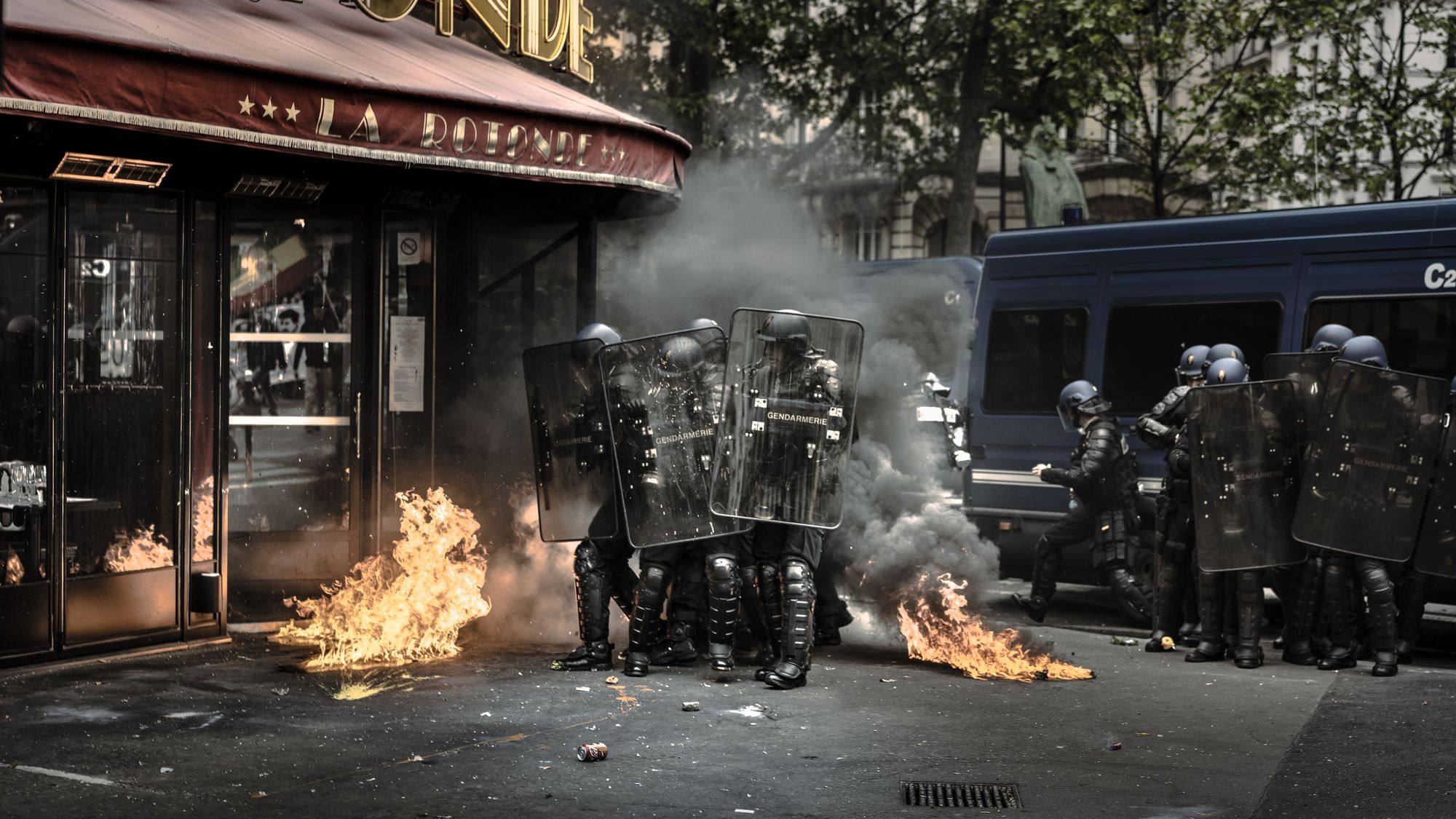 photo 3: Boulevard du Montparnasse. Paris, May 17, 2016. Before these demonstrations, violence from both protesters and police had not been seen for decades in France. © Rémy Soubanère / Studio Hans Lucas 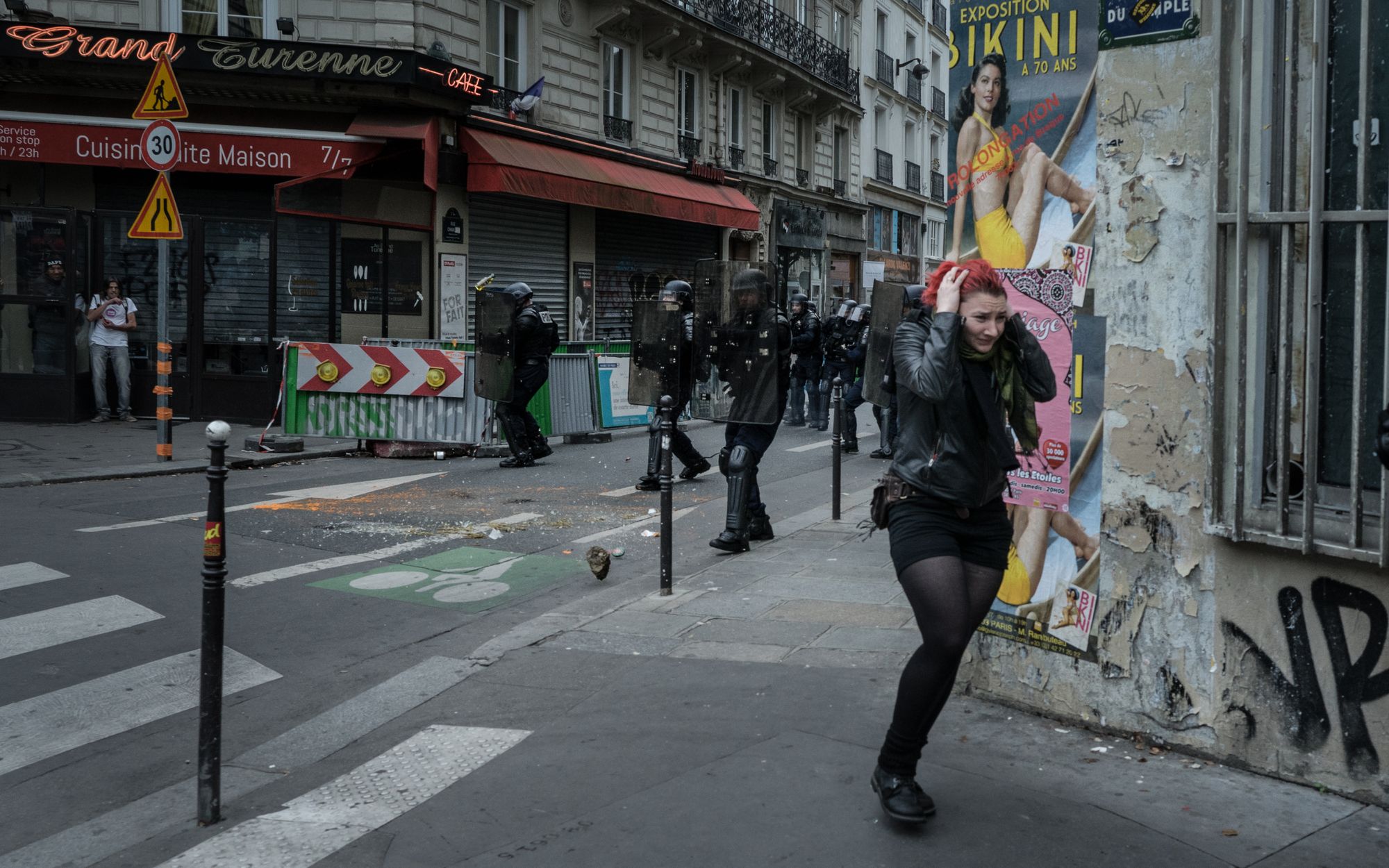 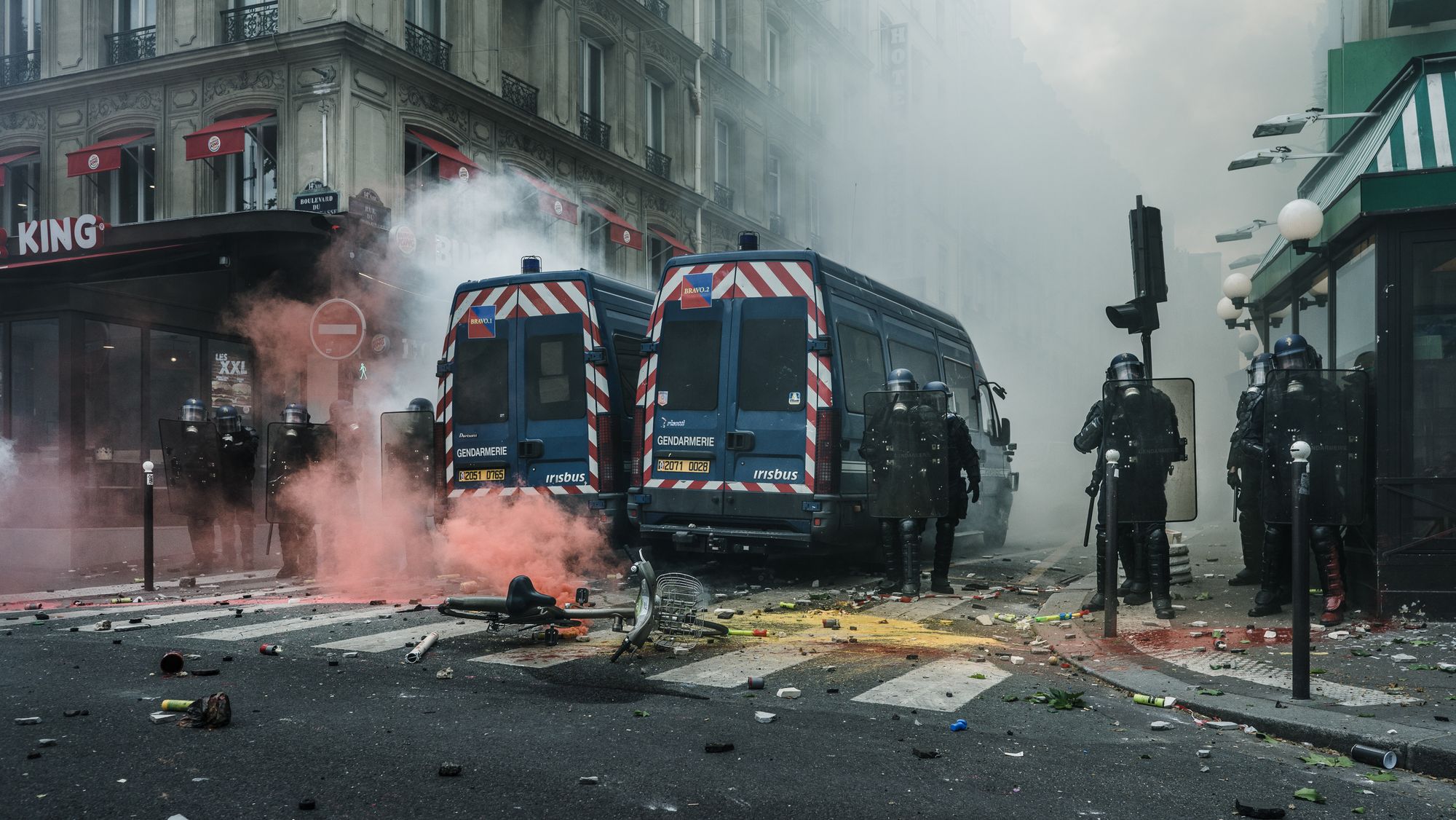 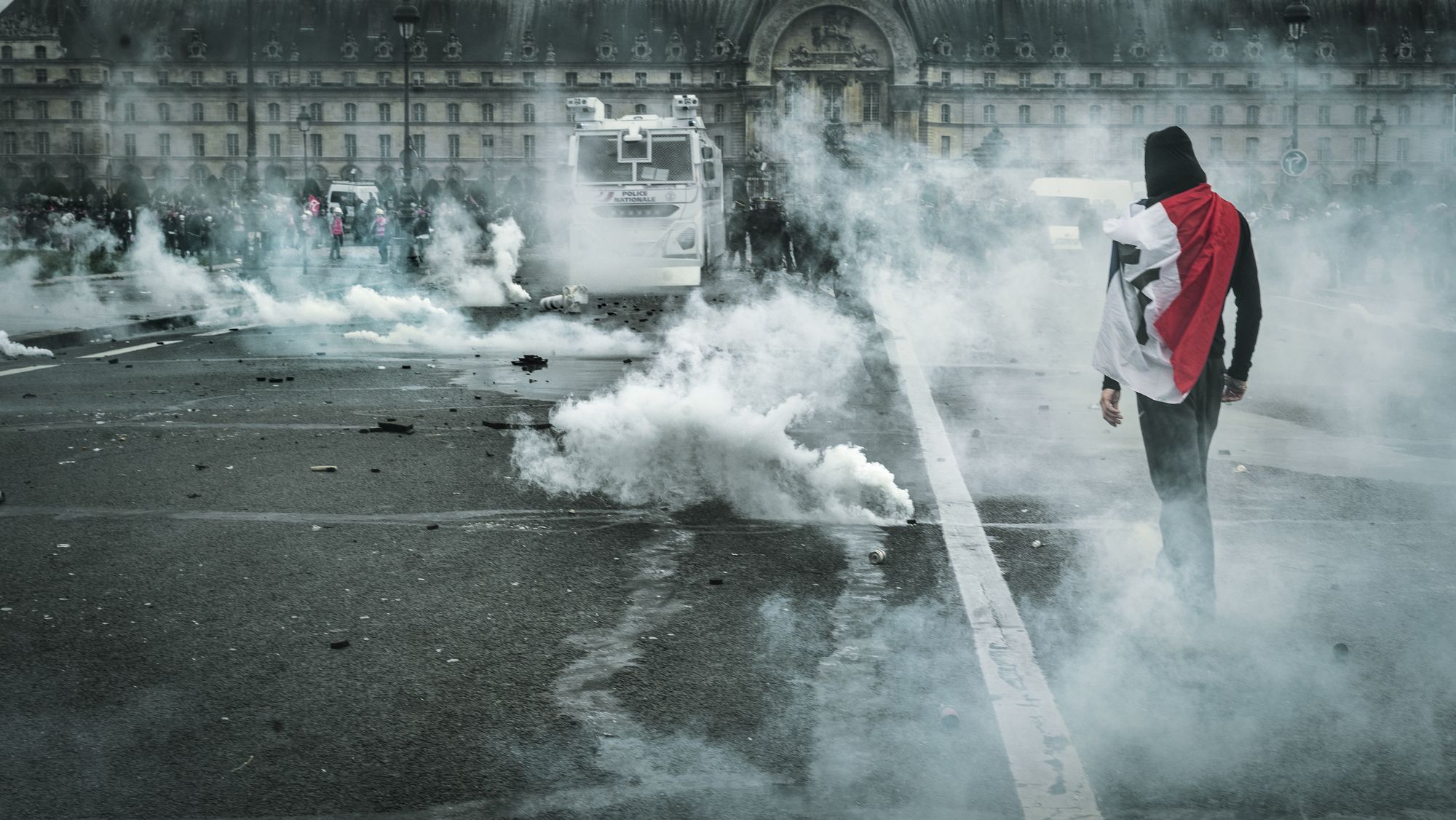 photo 6: Esplanade des Invalides, Paris, June 14, 2016. The riots at their peak. This demonstration was considered a victory against the police by the rioters. © Rémy Soubanère / Studio Hans Lucas 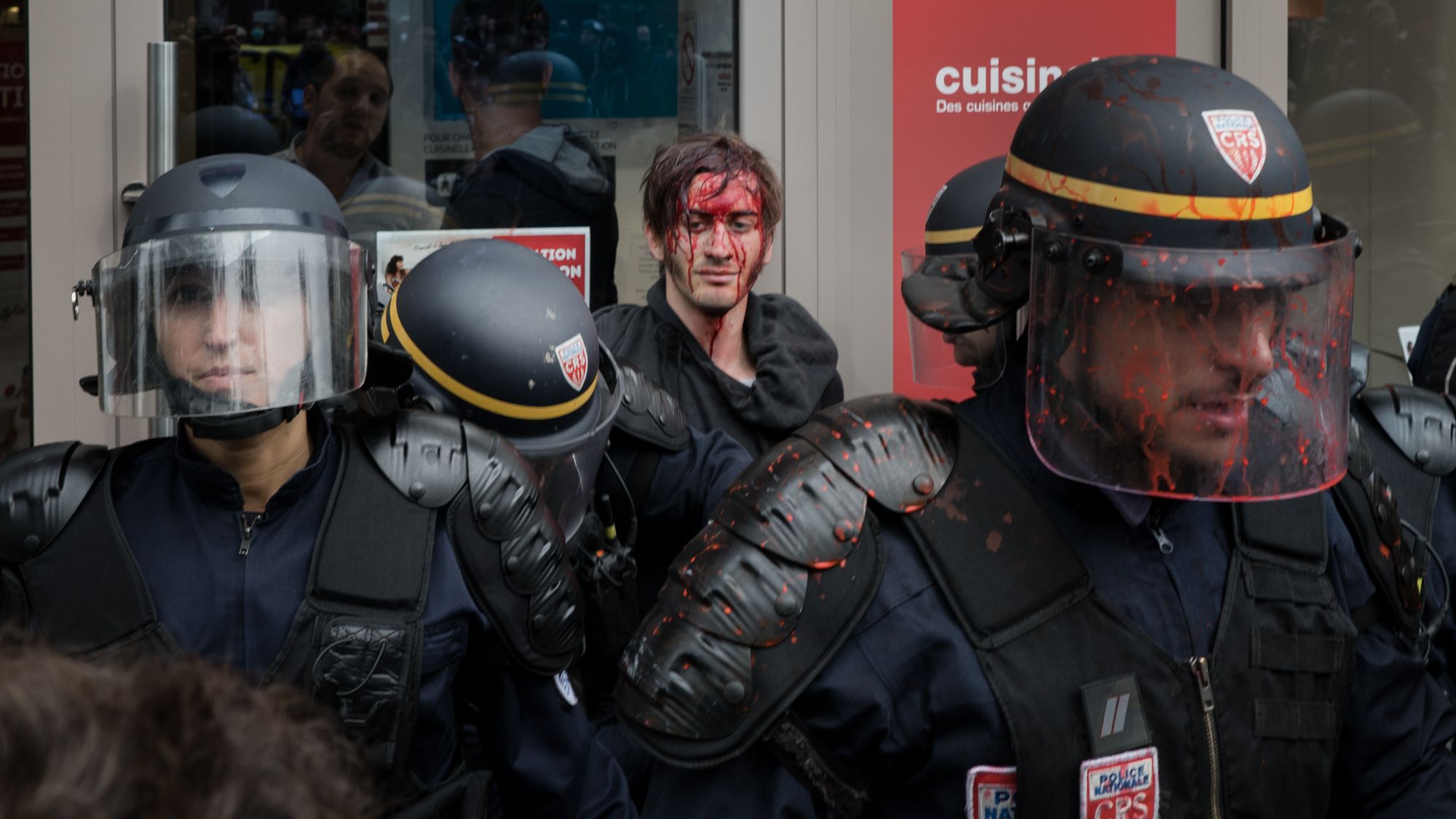 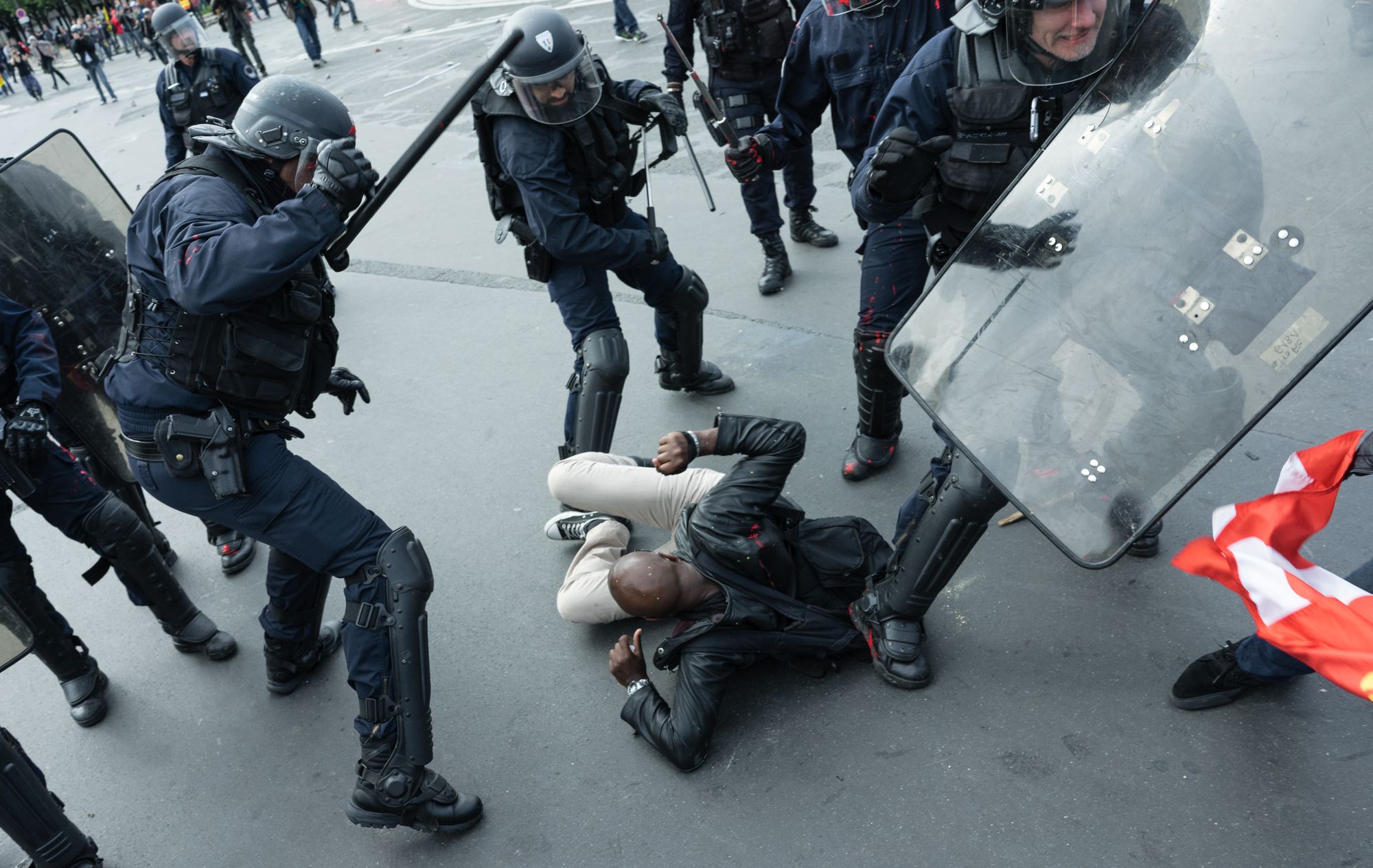 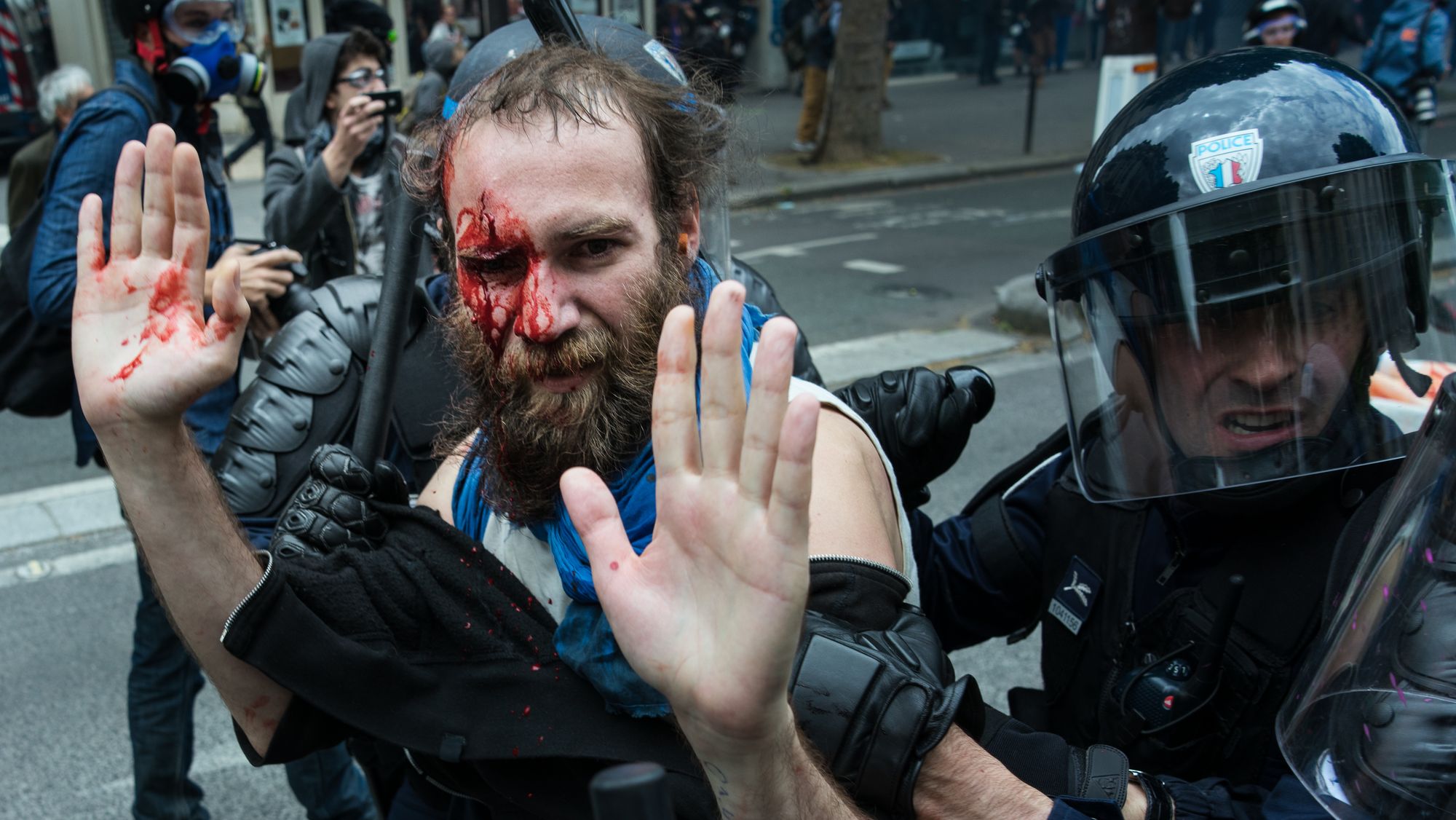 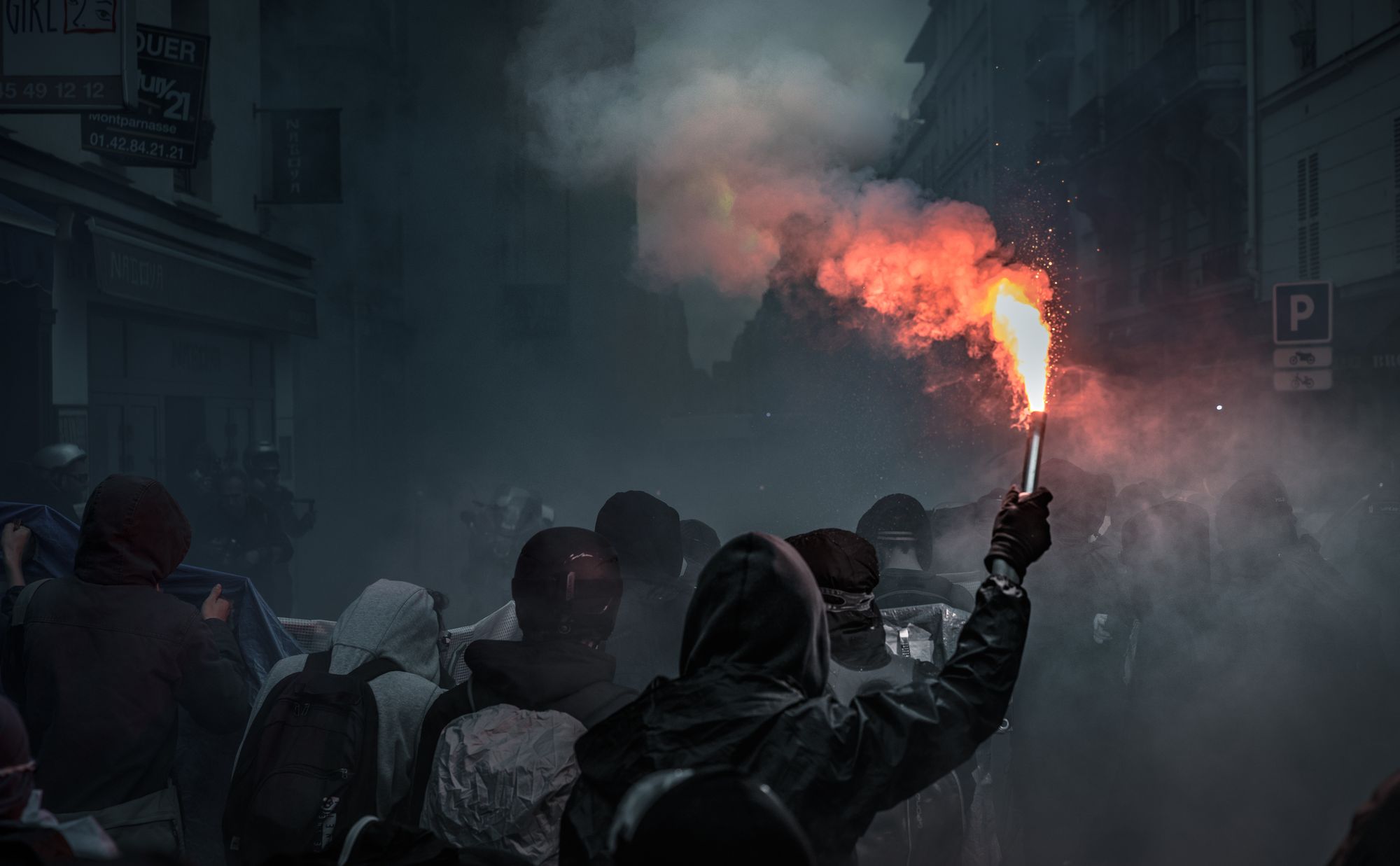 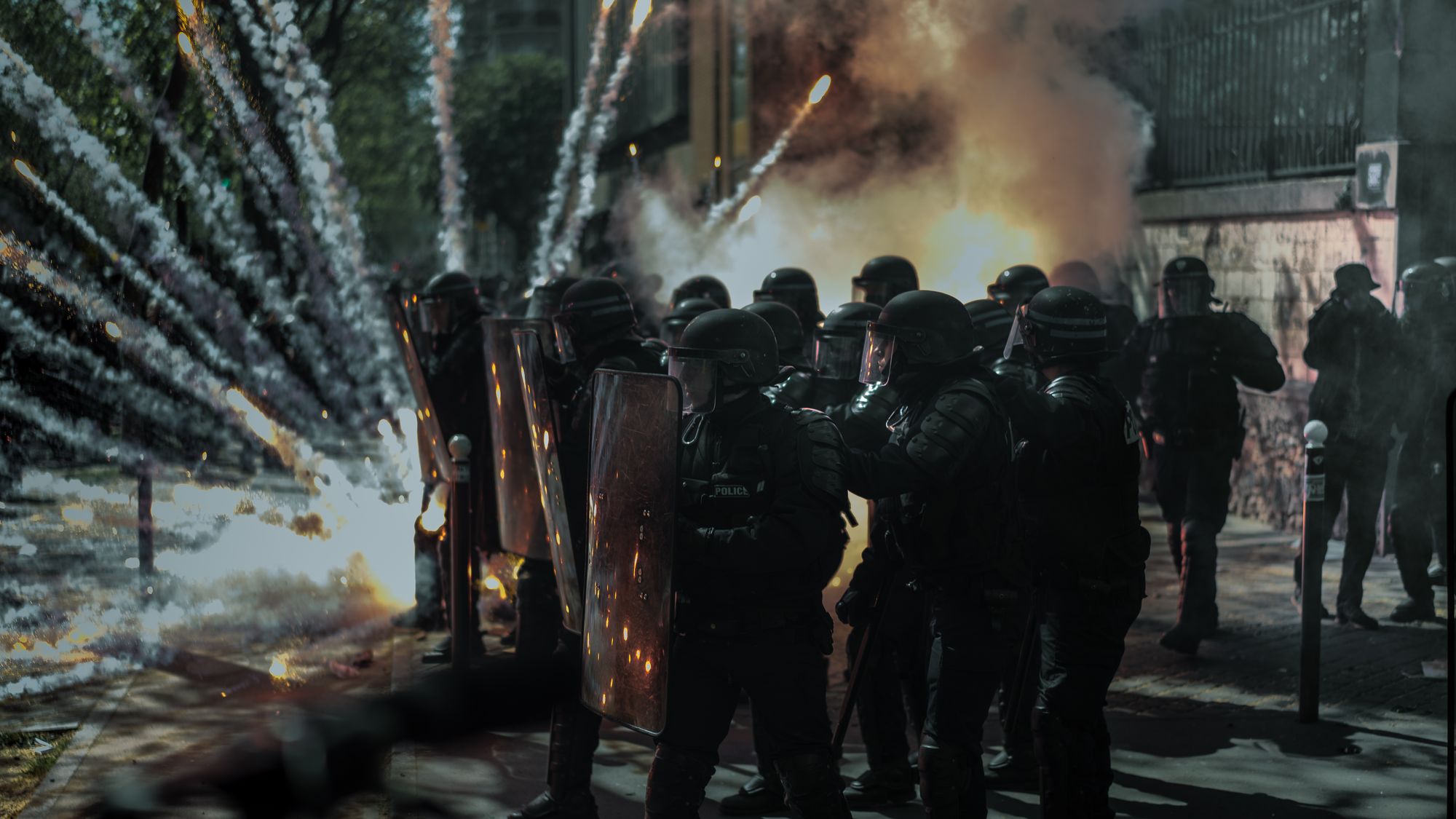 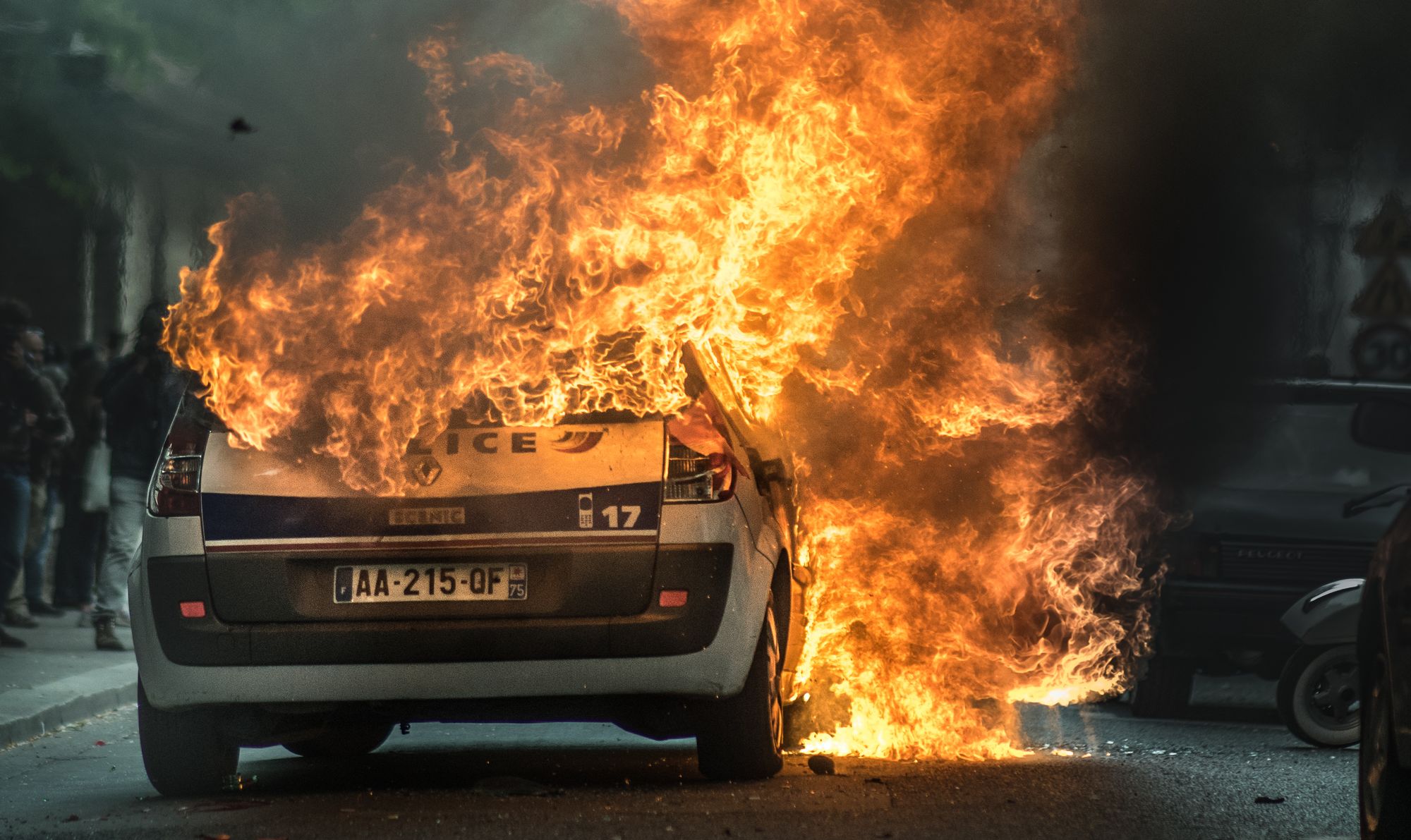 photo 12: The protests turned definitively violent at times as a result of actions by the police and the demonstrators. © Rémy Soubanère / Studio Hans Lucas 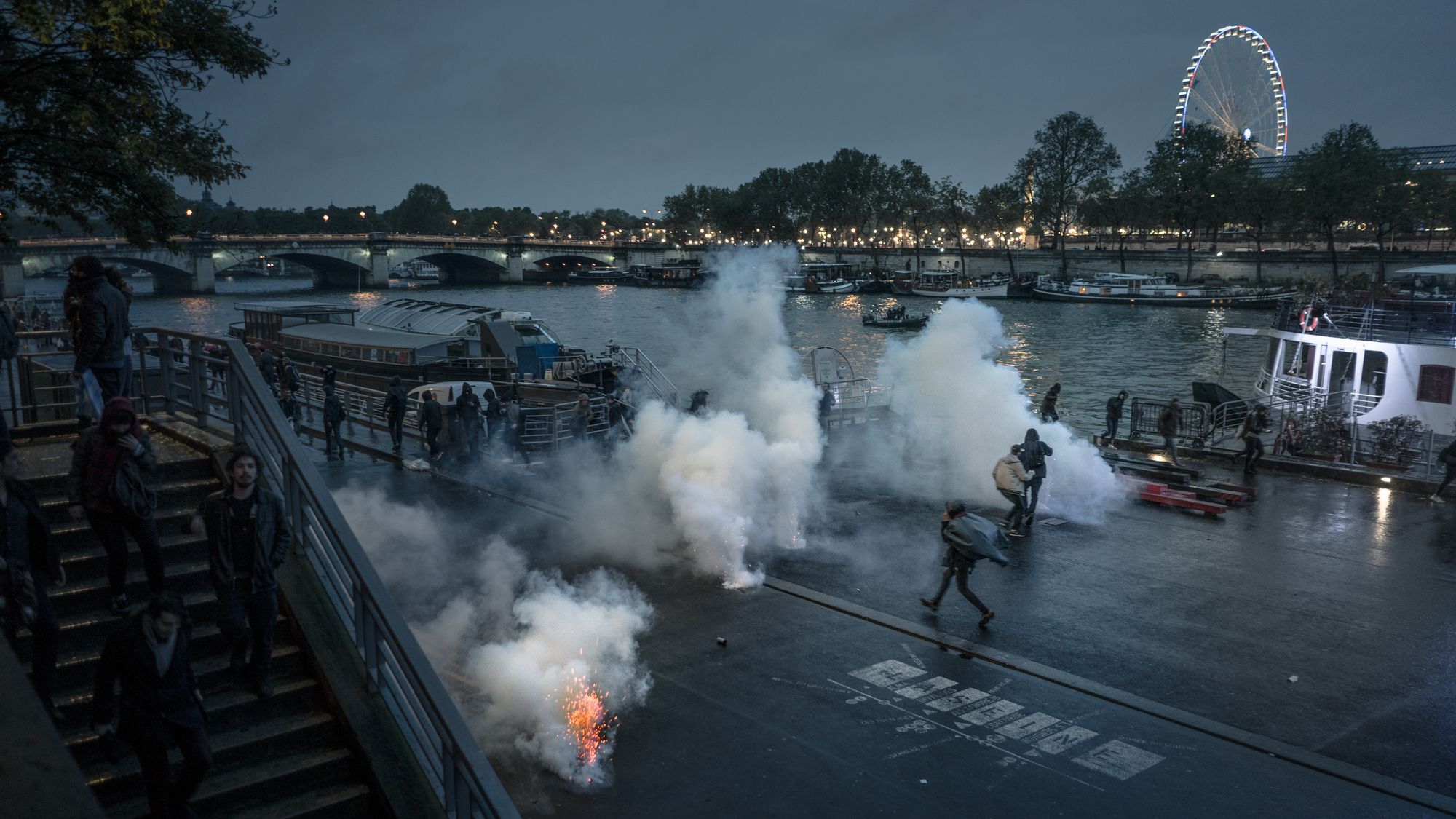 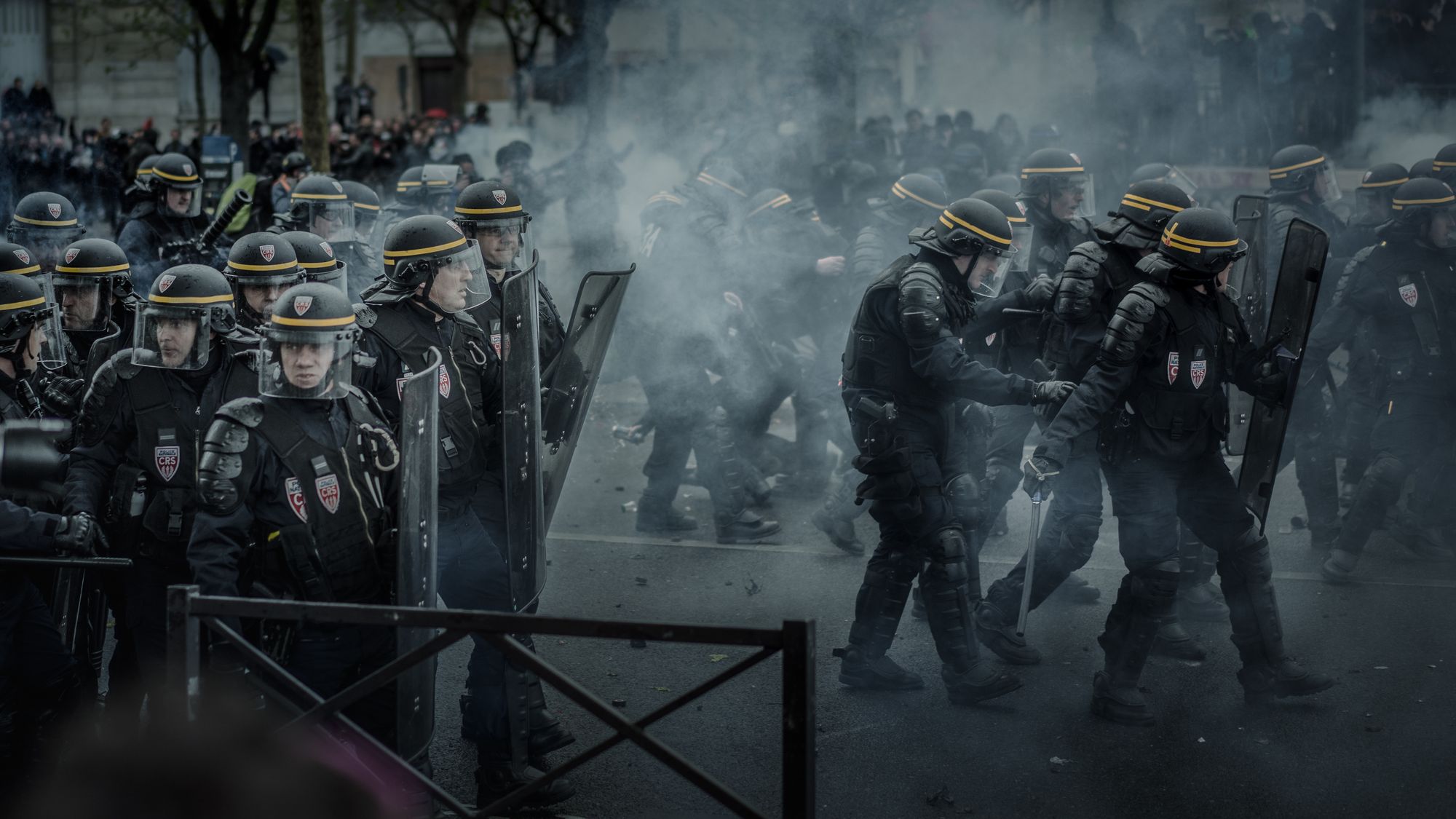 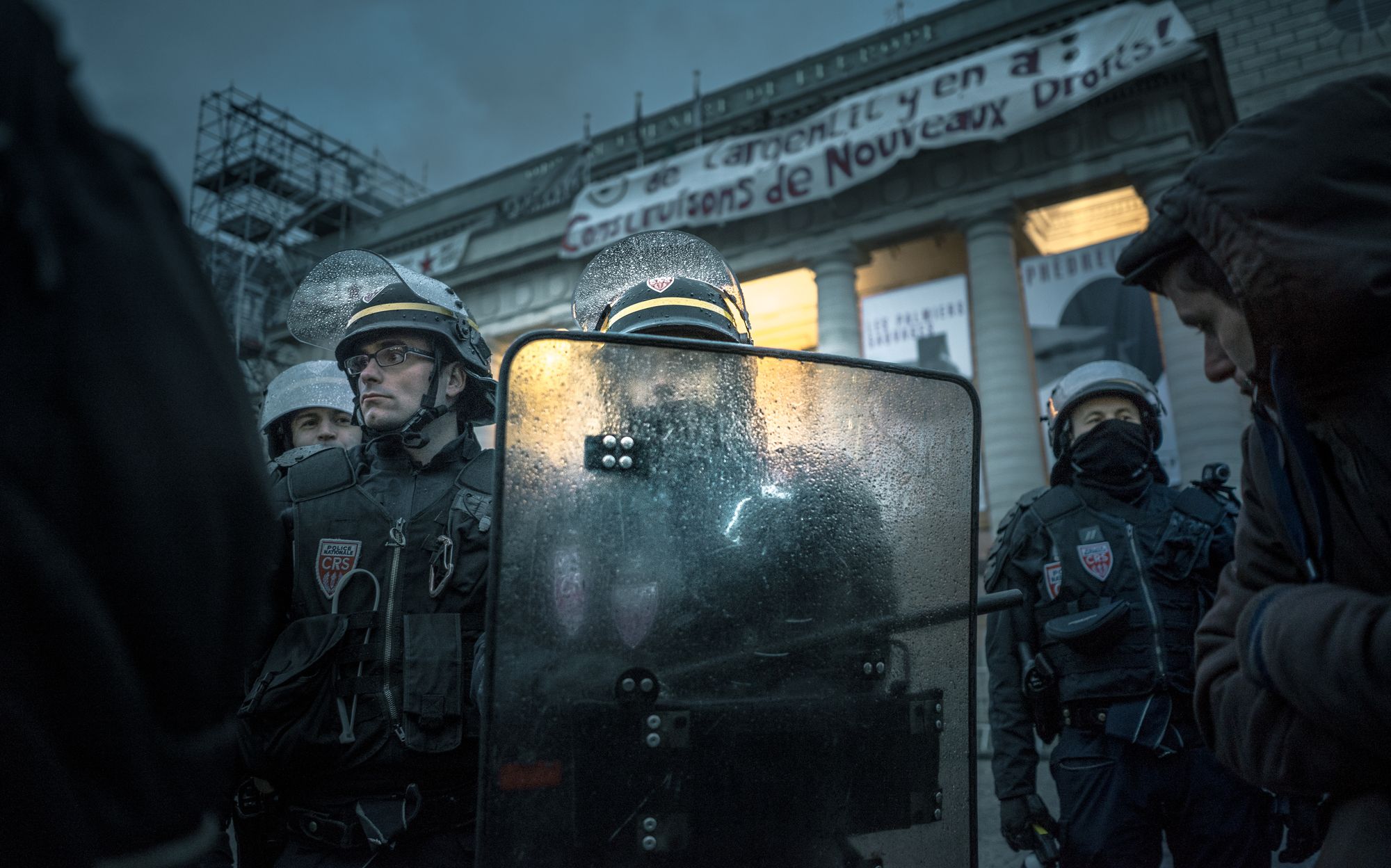 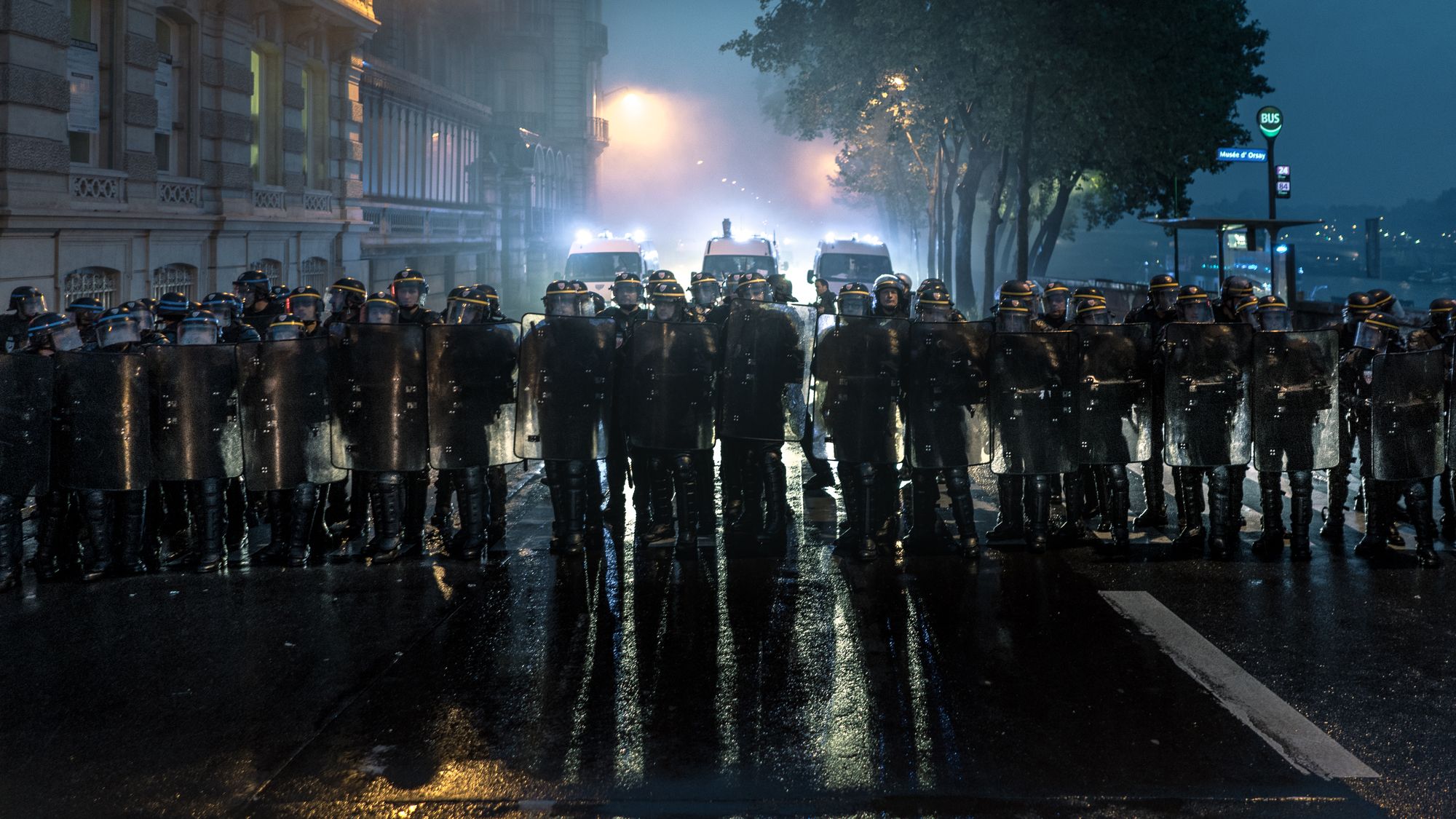 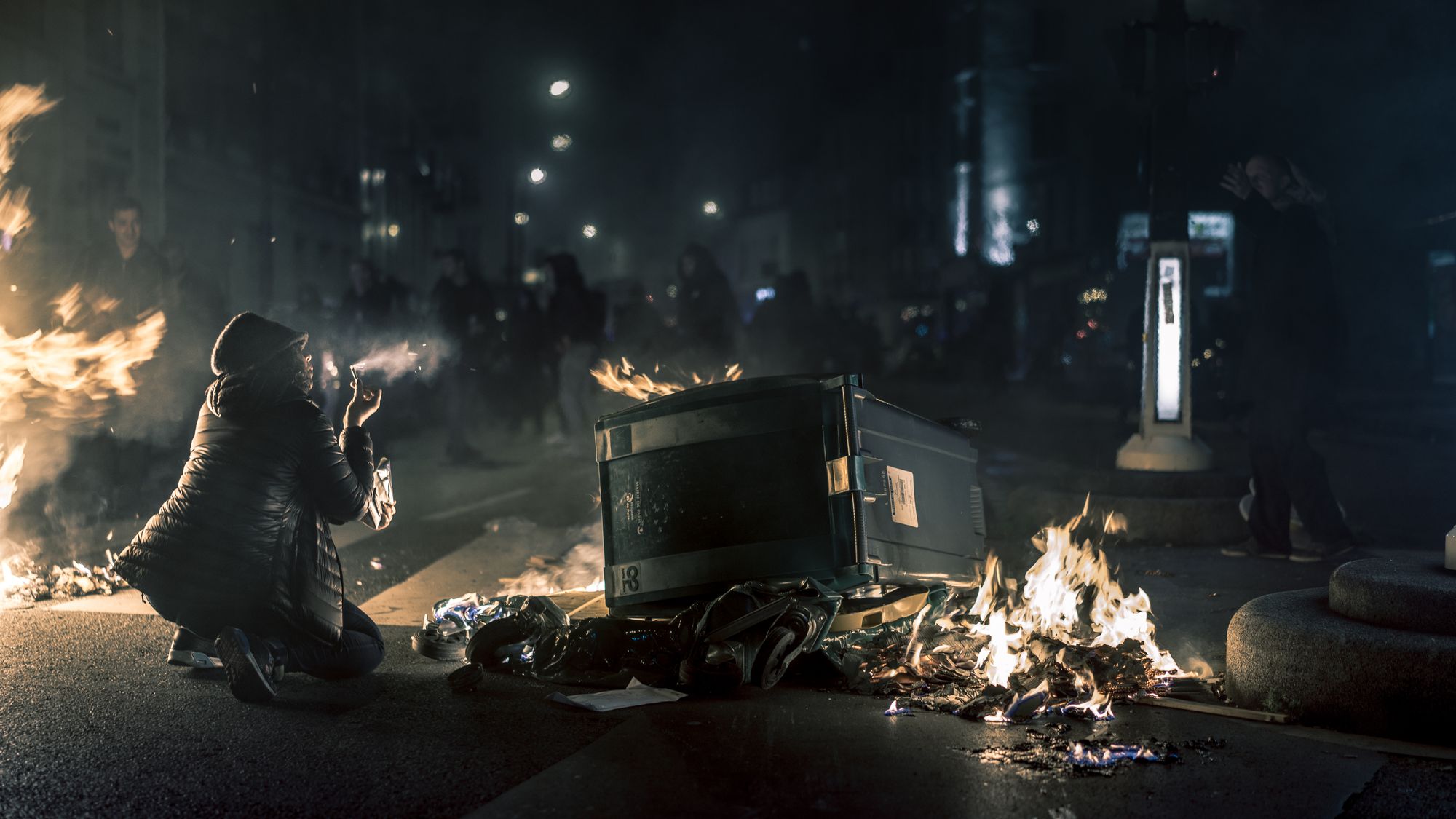 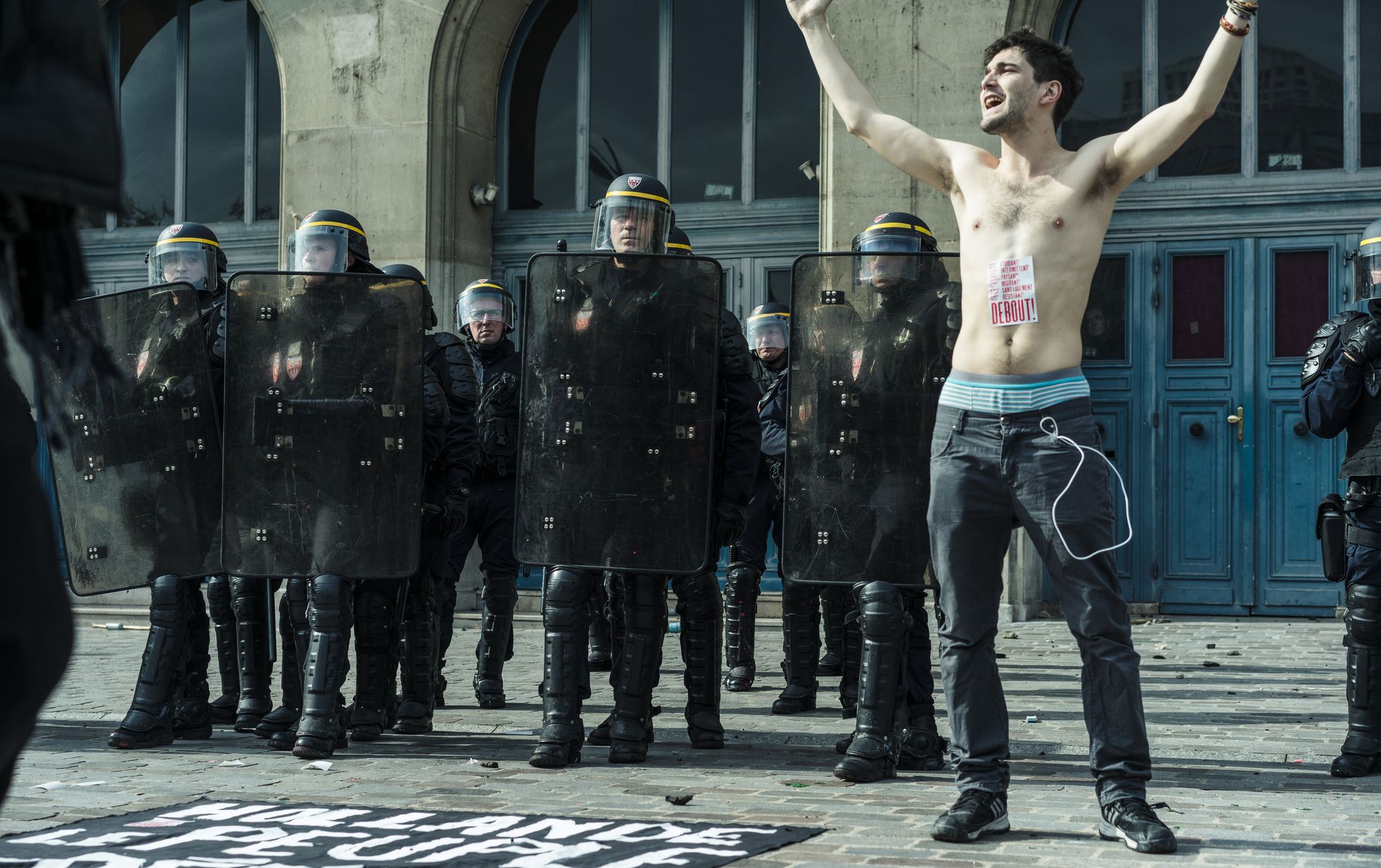 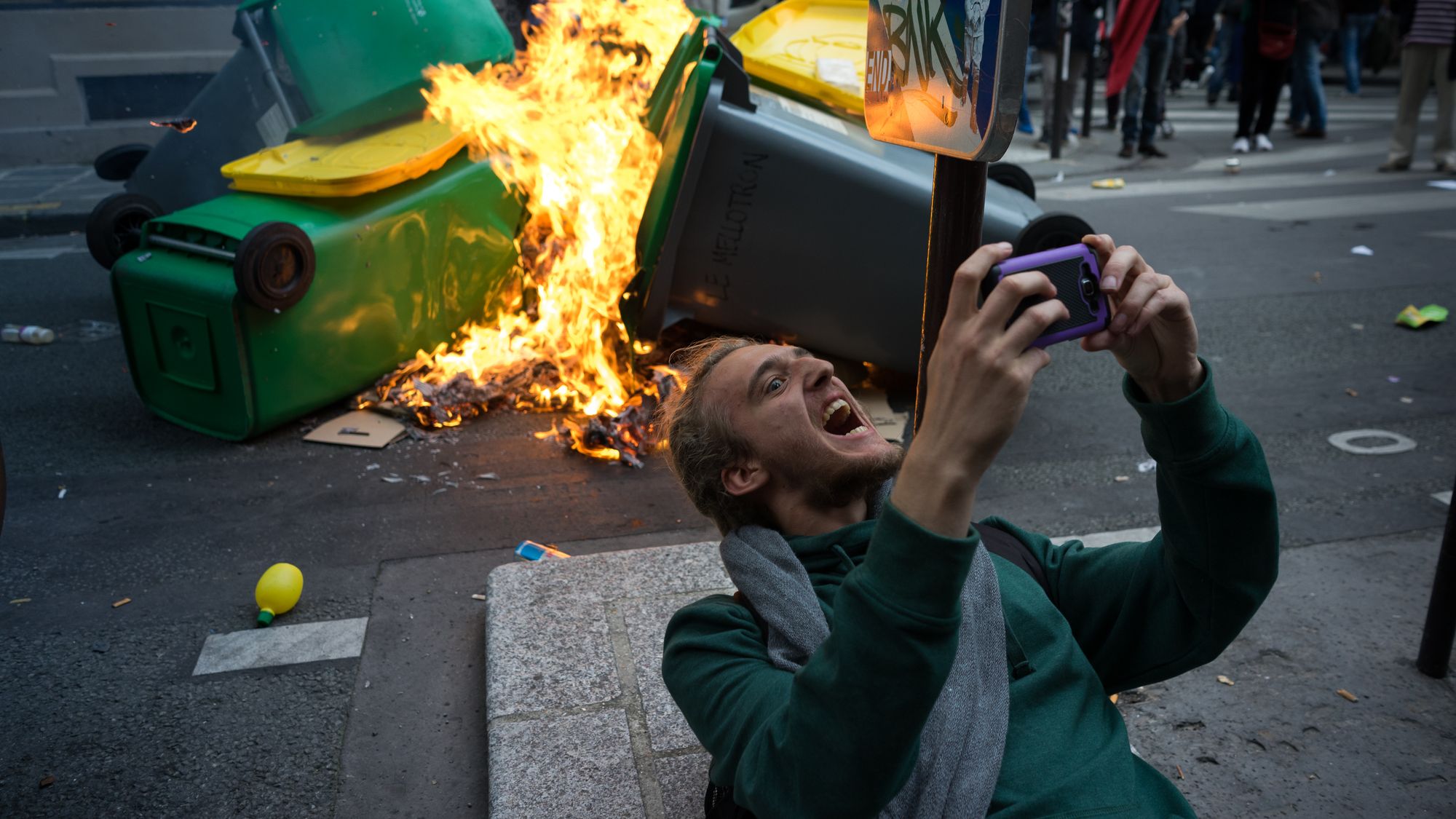 photo 19: Riot 2.0—For the Record. Paris, September 15, 2016. The last demonstration and last gasp of this social movement. The labour reform law was ultimately adopted during the summer break. The end was in the air; everyone was running on autopilot. © Rémy Soubanère / Studio Hans Lucas

In the United States, it is common to mark September 11, 2001 as a momentous day in the country’s recent history: a dividing line between a more innocent “pre-” age and its hardened, contemporary “post-9/11” reality.

In France, an analogous date is January 7, 2015—the day on which two brothers marched into the offices of a little-known satirical newspaper called Charlie Hebdo and opened fire on hundreds of years of free expression and laïcité, not to mention Paris’ own particular, ingrained atmosphere of beauty and nonchalance.

As we know now, the attack on Charlie Hebdo was only the beginning. Further incidents in Paris, Nice and other parts of the country erased any possibility of remaining above the global struggle against terrorism (inaugurated, on the world stage, on 9/11). And while Charlie Hebdo was followed by a cathartic day of national unity, subsequent attacks were marked only by a prolongation of the country’s state of emergency. The atmosphere grew ever-heavier.

Which brings us to the pictures of Remy Soubanere. Ostensibly, the focus of Soubanere’s pictures is the country’s intense and vitriolic response to the (Socialist) government’s attempts at labor reform, known as the El Khomri law. Of course, France has a long and proud history of agitating for and upholding its labor rights—but these protests took on a darker and angrier tone. After the legislation was first proposed in parliament—while still in the draft stage—it was met with significant public opposition which soon metastasized into countrywide demonstrations.

Spearheaded by trade unions and student groups, but soon reaching out to all levels of society, this sweeping uprising came to be called “Nuit Debout”—France’s locally-grown answer to Occupy Wall Street. But despite the energetic all-night discussions and idealistic talks of rewriting France’s constitution, there was something more fraught in the air. After all, the specter of another Bataclan loomed above every public gathering held in a major city, invisible yet palpable.

Indeed, an uninitiated reader could be forgiven if she looked quickly at Soubanere’s photos and thought them from an embattled city somewhere far away—Kiev, Damascus, Istanbul. But no, whether we recognize it or not, this series shows us Paris—that erstwhile city of love, light, poetry and photography, dramatically transformed into yet another stage for conflict.

As Soubanere wrote, Nuit Debout’s aim was nothing short of “overthrowing the El Khomri bill and the world it represents.” A mission not dissimilar from that of the two brothers who walked into Charlie Hebdo’s office on January 7, who wanted nothing less than to overthrow the world that allows the free expression of opinions, no matter how offensive or immature.

Welcome to Paris. Welcome to our brave new world.

Editors’ Note: This work was recognized by the jury of the LensCulture Emerging Talent Awards 2016—don’t miss the work from all 50 of these outstanding talents!

If you enjoyed this article, you might also like one of these previous features: Rémy’s previous award-winning series on the eerie, nocturnal streets of Paris, Alphaville; Witnessing Gezi, a multimedia project on the protests in Taksim Square, Istanbul; and Diambra Mariani and Francesco Mion’s project on Mexico’s response to the mass kidnapping of 43 students in 2014.