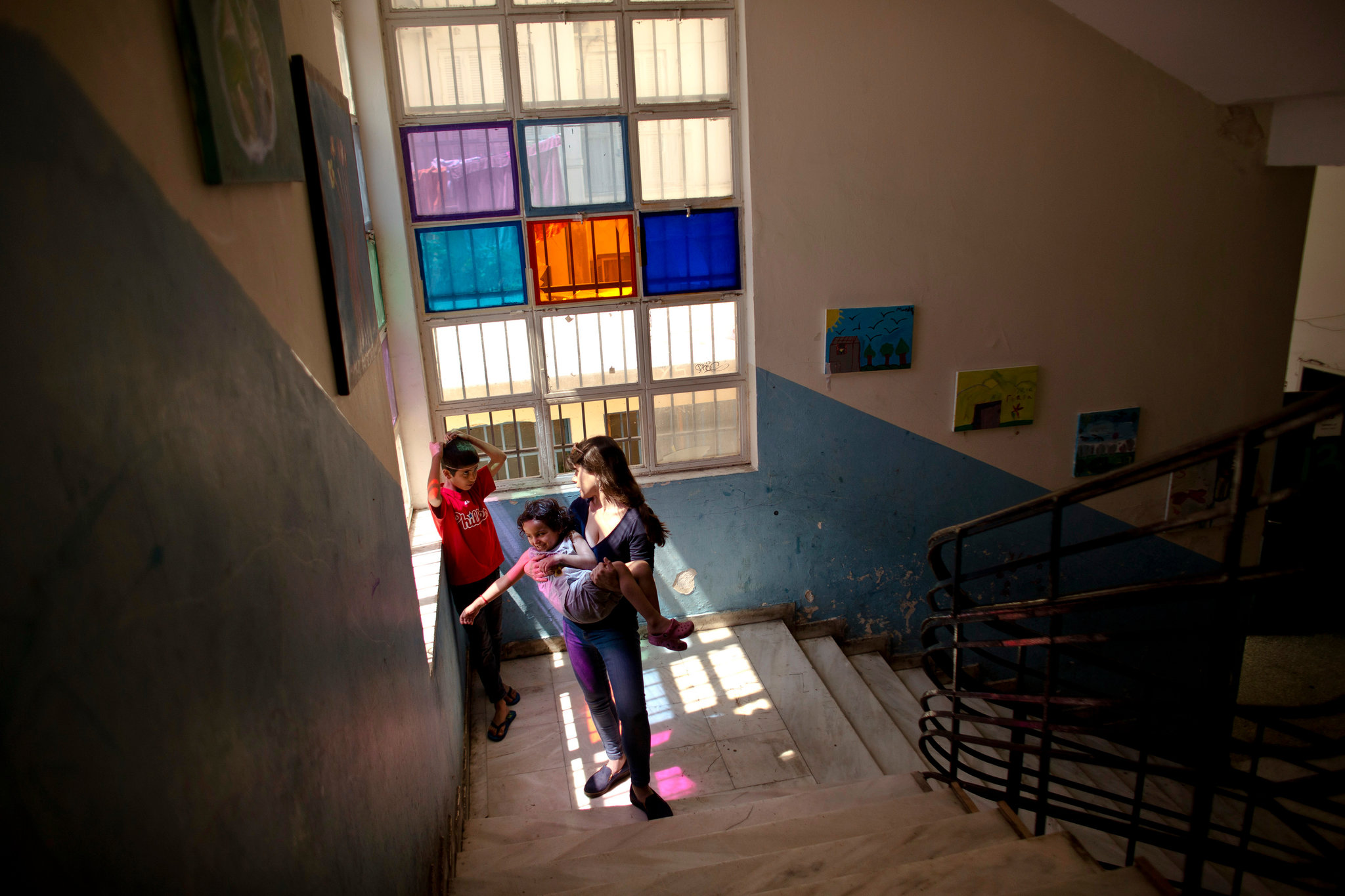 It may seem paradoxical, but Greece ’s anarchists are organizing like never before.

Seven years of austerity policies and a more recent refugee crisis have left the government with fewer and fewer resources, offering citizens less and less. Many have lost faith. Some who never had faith in the first place are taking matters into their own hands, to the chagrin of the authorities.

Tasos Sagris, a 45-year-old member of the Greek anarchist group Void Network and of the “self-organized” Embros theater group, has been at the forefront of a resurgence of social activism that is effectively filling a void in governance.

“People trust us because we don’t use the people as customers or voters,” Mr. Sagris said. “Every failure of the system proves the idea of the anarchists to be true.”

These days that idea is not only about chaos and tearing down the institutions of the state and society — the country’s long, grinding economic crisis has taken care of much of that — but also about unfiltered self-help and citizen action.

Yet the movement remains disparate, with some parts emphasizing the need for social activism and others prioritizing a struggle against authority with acts of vandalism and street battles with the police. Some are seeking to combine both.

Whatever the means, since 2008 scores of “self-managing social centers” have mushroomed across Greece, financed by private donations and the proceeds from regularly scheduled concerts, exhibitions and on-site bars, most of which are open to the public. There are now around 250 nationwide.

Some activists have focused on food and medicine handouts as poverty has deepened and public services have collapsed.

In recent months, anarchists and leftist groups have trained special energy on housing refugees who flooded into Greece in 2015 and who have been bottled up in the country since the European Union and Balkan nations tightened their borders. Some 3,000 of these refugees now live in 15 abandoned buildings that have been taken over by anarchists in the capital.

The burst of citizen action is just the latest chapter in a long history for the anarchist movement in Greece.

Anarchists played an active role in the student uprisings that helped bring down Greece’s dictatorship in the mid-1970s, including a rebellion at the Athens Polytechnic in November 1973, which authorities crushed with police officers and tanks, resulting in several deaths.

Since the late 1970s and early 1980s, anarchists have joined leftist groups in occupying portions of Greek universities to promote their thinking and lifestyle; many of those occupied spaces exist today, and some are used as bases by anarchists to fashion the crude firebombs hurled at the police during street protests.

Over the years, anarchists have also backed a spectrum of causes, such as opposing “neoliberal” education reform or campaigning against the 2004 Olympic Games in Athens.

The movement continues to be largely tolerated by the public at large, reflecting a deep distrust of authority among Greeks that has been stoked in recent years by the austerity measures imposed on the debt-racked country by international creditors.

In Athens, the anarchists’ epicenter remains the bohemian neighborhood of Exarchia, where the killing of a teenager by a police officer in 2008 set off two weeks of rioting, helped reinvigorate the movement and produced several guerrilla groups that led to a revival of domestic terrorism in Greece.

The police and the authorities tread lightly in the area.

The police have recently raided some buildings illegally occupied by anarchists, called squats, in Athens, in the northern city of Thessaloniki and on the island of Lesbos, a gateway for hundreds of thousands of migrants over the past two years. But the authorities have stopped short of a blanket crackdown, which would be difficult for the leftist Syriza party of Prime Minister Alexis Tsipras to condone.

In an interview, Public Order Minister Nikos Toskas said that the police sweeps were “systematic,” and that the raids were being carried out “where they are needed.”

The mayor of Athens, Giorgos Kaminis, condemned the squats, saying they have compromised “the quality of life of the refugees.”

“No one knows who they are controlled by and what conditions people being put up in occupied buildings live in,” he said in a response to a reporter’s questions.

The anarchists say their squats are a humane alternative to the state-run camps now filled with more than 60,000 migrants and asylum seekers. Human rights groups have broadly condemned the camps as squalid and unsafe.

In Exarchia, one of the squats includes a former state secondary school that was abandoned because of structural problems. Established last spring with the help of anarchists, the squat is now home to some 250 refugees, mostly from Syria, who have set up a chicken coop on the roof. Many more refugees are on a “waiting list” for other occupied buildings.

The squats function as self-organized communities, independent from the state and nongovernmental organizations, said Lauren Lapidge, 28, a British social activist who came to Greece in 2015 at the peak of the refugee crisis and is actively involved with several occupied buildings.

“They are living organisms: Kids go to school, some were born in the squat, we’ve had weddings inside,” she said.

Another initiative in Exarchia involves anarchists and local residents who have moved a cargo container into the neighborhood’s central square, calling it a political kiosk, from which they distribute food and medicine and sell anarchist literature.

Vassiliki Spathara, 49, a painter and anarchist living in Exarchia, said the initiative was necessary because the local authorities would not intervene “even to replace light bulbs” in the square, known as a haunt for drug dealers, though activity has abated recently.

“The authorities want to downgrade the area because it’s the only place in Athens that has an organized, anti-establishment identity,” Ms. Spathara said.

Mayor Kaminis said the local authorities were cooperating with residents “to rejuvenate the area,” and insisted that Exarchia residents had the same rights as all Athenians.

Yet in Greece’s crumbling political landscape, anarchists appear to be styling themselves as a political alternative to the government.

“We want people to fight back, in all ways, from taking care of refugees to burning banks and Parliament,” said Mr. Sagris, the member of Void Network and the Embros theater group, which raises money to fund squats housing refugees. “Anarchists use all tactics, violent and nonviolent.”

He noted, however, that anarchists had a “moral obligation” to make sure that tragedies — like the deaths of three people in May 2010 when an Athens bank was firebombed during an anti-austerity rally — did not happen again. Though anarchists were blamed, none were convicted in a trial that ended with three bank executives convicted of manslaughter through neglect resulting from safety oversights. (They were released on bail, pending an appeal.)

Another anarchist group, Rouvikonas, is looking beyond violence, though its members have made a cause of raiding and vandalizing state offices and businesses.

Last week, members of the group, armed with large wooden sticks festooned with black anarchist flags, conducted a night patrol of a large park in central Athens, saying the police had not intervened to stop the drug trade and prostitution involving young migrants.

Mr. Toskas, who oversees the Greek police force, said the authorities had made a major dent in the drug trade in Exarchia. “Some anarchist groups want to say that they got rid of drugs in the area so that they can control it,” he said.

Rouvikonas members recently applied to a local court to found a “cultural society”— to help organize fund-raising events — and on Saturday the group presented its “political identity” at a squat in Exarchia. (Anarchists insist they are not forming a political party.)

“Anarchists obviously cannot form a political party,” said Spiros Dapergolas, 45, a graphic designer who belongs to Rouvikonas. “But we have our own means to enter the political center,” he said. “We want to get bigger.”

The group’s long-term aim is “militant unionism,” Mr. Dapergolas said. But, he conceded, it is not easy for people to organize themselves. In the meantime, he said, “what Rouvikonas is doing can be done by anyone.”

A version of this article appears in print on May 22, 2017, on Page A4 of the New York edition with the headline: Anarchists Fill Services Void Left By Faltering Greek Governance.