How to survive those days between when the money runs out and when his paycheck arrives for his work as a warehouse handler has become a monthly challenge. The same is true for so many others in Guéret, a grim provincial town in south-central France. And it has made Mr. Dou angry.

So he used what money he had left and drove 250 miles to join the fiery protests on Saturday in Paris, where the police moved in with tear gas, water cannon and rubber bullets.

“We knew they were sent in to get rid of us,” he said the day after, “and believe me, they were not into Mr. Nice Guy.” But he vows the protesters are not going anywhere.

The “Yellow Vest” protests he is a part of present an extraordinary venting of rage and resentment by ordinary working people, aimed at the mounting inequalities that have eroded their lives. The unrest began in response to rising gas taxes and has been building in intensity over the past three weeks, peaking on Saturday.

With little organization and relying mostly on social media, they have moved spontaneously from France’s poor rural regions over the last month to the banks of the Seine, where they have now become impossible to ignore.

On Sunday, President Emmanuel Macron toured the graffiti-scrawled monuments of the capital and the damage along some of the richest shopping streets in Europe. All around France, the protests left three dead and more than 260 wounded, with more than 400 arrested. Mr. Macron convened a crisis cabinet meeting, weighing whether to impose a state of emergency.

Mr. Macron has previously insisted that, unlike past French governments, he will not back down in the face of popular resistance to reforms like a loosening of labor laws. It’s a harder line than many other western European countries have taken.

The protesters ridicule him as a president of the rich and say he is trying to balance his budgets on their backs as he remains deaf to their concerns.

But if it was the shattered glass and burned cars along Rue de Rivoli or Boulevard Haussmann in Paris that finally got Mr. Macron’s attention, the movement — named for the roadside safety vests worn by demonstrators — has in fact welled up from silent towns like Guéret, an administrative center of 13,000 people, lost in the small valleys of central France.

Far from any big city, it sits in one of the poorest departments of France, where the public hospital is the biggest employer. The cafe in the main square is empty by midafternoon. The hulks of burned-out cars dot the moribund train station’s tiny parking lot, abandoned by citizens too poor to maintain them.

In places like these, a quiet fear gnaws at households: What happens when the money runs out around the 20th? What do I put in the refrigerator with nothing left in the account and the electricity bill to pay? Which meal should I skip today? How do I tell my wife again there is no going out this weekend? 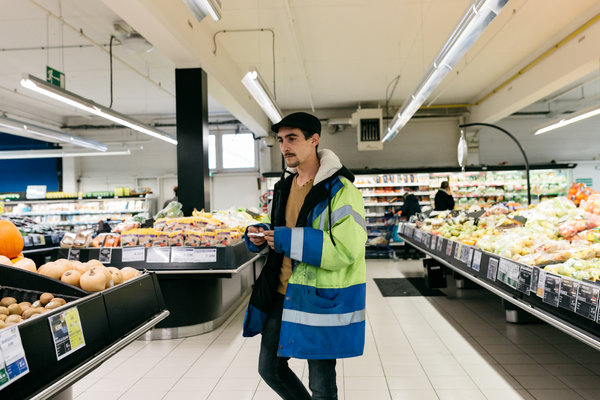 The stories of Mr. Dou’s neighbors who also joined the protests were much like his own. Inside Laetitia Depourtoux’s freezer were hunks of frozen meat, a twice-a-year gift from her farmer-father, and the six-member family’s meat ration.

On these cold nights, Joel Decoux’s oven burned the wood he chopped himself because he can’t afford gas for heating.

It is not deep poverty, but ever-present unease in the small cities, towns and villages over what is becoming known as “the other France,” away from the glitzy Parisian boulevards that were the scene of rioting this weekend.

“We live with stress,” said Fabrice Girardin, 46, a former carpet-layer who now looks after other people’s pets to get by. “Every month, at the end of the month, we say, ‘Will there be enough to eat?’ ”

Since the acidic portrait of Guéret in novels by a famous native son, the anti-Semitic 20th-century writer Marcel Jouhandeau, the town is used to being mocked as the epitome of provincial backwardness.

The Yellow Vest protesters, the descendants of those who inspired Jouhandeau’s characters, can now be found waiting at the road blocks as you come into town — truck and school-bus drivers, nurses, out-of-work electricians, housewives, warehouse handlers, part-time civil servants and construction workers on disability aid.

Mr. Dou — who says his 9-year-old son has never been on vacation and his gross salary of 1,300 euros a month, about $1,475, “disappears immediately in the bills” — was among them. There is little left after high taxes and costly utilities such as electricity.

To protest, he and the other protesters wait at night in the middle of the roundabouts, in the rain and cold and mud under makeshift tarpaulin shelters and tents in the darkness of early morning. “The People’s Élysée” is scrawled on one, mocking Mr. Macron’s Élysée Palace, seat of the presidency. “Macron, he’s with the bosses, Macron, he’s against the people,” a singer intoned in a reggaelike jingle from the radio.

Mr. Dou said he had joined the movement from the beginning, and he was an assiduous presence over several days last week on the traffic circles at Guéret. He was there at 11 p.m. on a rainy Thursday, after putting in several hours that morning, and he was there the next day as well.

“We don’t even need the social networks anymore,” he said.

His motivation, he said, was to “recover the country’s priorities. The values of Liberty, Equality and Fraternity.” The gas tax “was what set it all off.”

Now, he felt that the Yellow Vest protesters really have the government on the run.

“They don’t know what to do. They’re really in a panic.”

Virtually every car that passes honks in sympathy. But the protesters know that their shouts grow faint over the long distance to real power in Paris, and that is what has propelled them to move their demonstrations there. 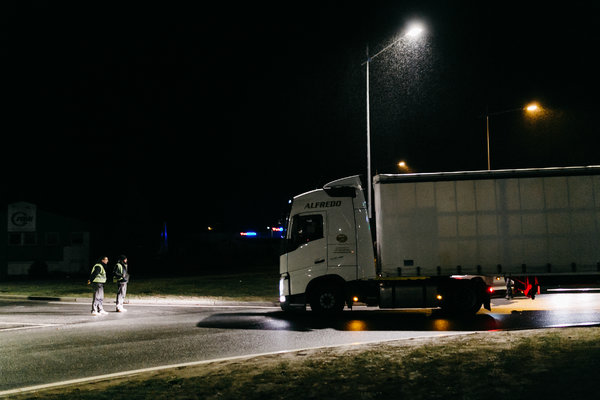 The protesters stopped a truck at a roundabout in Guéret.CreditAndrea Mantovani for The New York Times

By Friday, Mr. Dou was preparing to make the drive in a shared car up to Paris: checking in with his comrades at the traffic circle and buying last-minute supplies — including solution to protect his eyes from tear gas.

Yoann Decoux, an out-of-work electrical lineman in his 30s who was presented by Guéret’s Yellow Vest protesters as their spokesman, had been arrested in Paris the week before.

“I’ve never been in political demonstrations before,” he said. “But we said, enough’s enough.”

“They don’t even know how we get by with our tiny little salaries,” he said. “But we are humans too, for God’s sake!” He was getting by with vegetables and help from his part-time farmer-father.

None of the Guéret protesters expressed allegiance to any politician: Most said politics disgusted them.

When Guéret’s mayor, Michel Vergnier, a veteran Socialist with decades of connections in Paris, went to see the protesters, they were not welcoming.

“There’s a rejection of politicians,” Mr. Vergnier said. “They are outside all political and union organizations.” 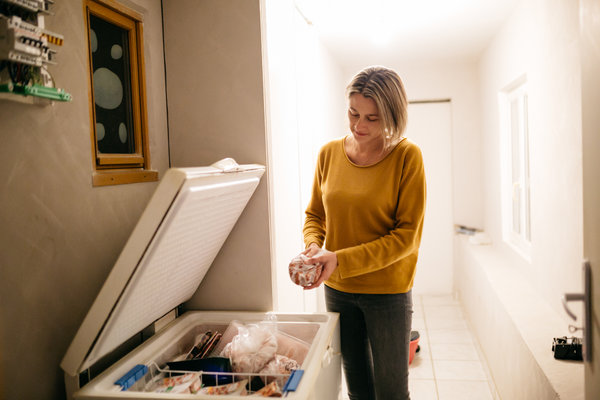 Inside Laetitia Depourtoux’s freezer were hunks of frozen meat, a twice-a-year gift from her farmer-father, and the six-member family’s meat ration. / Credit Andrea Mantovani for The New York Times

It was the end of the month. To a man and woman the Yellow Vest protesters of Guéret said their accounts were tapped out.

“Right now, I’m at zero,” Mr. Girardin said. His wife had done the shopping with 40 euros the day before, a Wednesday. Now there was nothing left to get them through the weekend.

“You get to the end of the month, there’s nothing,” he said.

That is why Mr. Macron’s plans to raise the gasoline tax, modest an increment as it may seem, was the final straw for so many, the spark that finally set off a seething rage that has been building for years.

There was no gas in his car, said Mr. Girardin, a carpet-layer who quit a job with a stagnant 1,200-euro a month salary to strike out on his own. But he was no better off now.

“Once we’ve finished paying all of our bills, there’s no money left.”

Tonight’s meal: noodles, with maybe a little ground beef. “I’d like to be able to take my wife to the restaurant from time to time, but I can’t,” Mr. Girardin said. Weighed down by financial stress, she had gone into a depression. “She’s totally closed in on herself,” he said.

Up the road the next morning, Ms. Depourtoux, a night-shift nurse at the hospital, was up at 6:30 a.m. with her husband, Olivier, an optician, to see their three daughters off to school in the darkness. Their modest house at a country intersection at the edge of town was pleasant but not spacious. 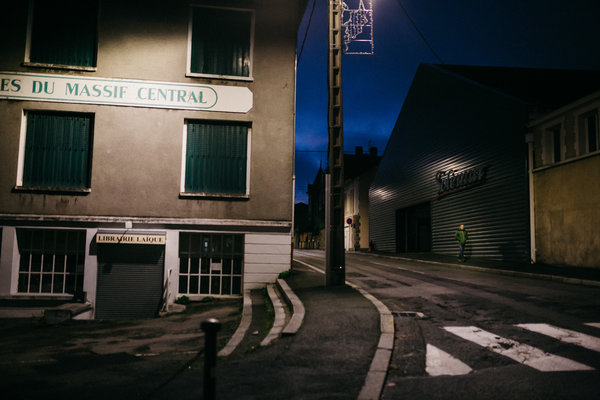 Guéret is located in the Creuse, the second poorest department in France. / Credit Andrea Mantovani for The New York Times

She gently mocked him because “there is never any gas in your car.” With four children and many bills, their money — 1,800 euros a month for her, 1,500 for him — was “very quickly gone,” Mr. Depourtoux said.

The bank refused to lend them any more money. Both had joined the Yellow Vests, and both had gone to Paris the preceding weekend to demonstrate. “As long as it continues, we are with it,” he said.

“We live, but we’ve got to be careful. We can’t go to the restaurant. All the little pleasures of life are gone,” Mr. Depourtoux said. His parents, after a lifetime of work, were reduced to penury: his father in a nursing home and his mother forced to accept meals from charity.

She fills the freezer with deep-discount frozen food from the hard discounter Lidl. They wait to get paid to fill up the car and to do the shopping.

“We just don’t make it to the end of the month,” said Elodie Marton, a mother of four who had joined the protesters at the demonstration outside town. “I’ve got 10 euros left,” she said, as a dozen others tried to get themselves warm around an iron-barrel fire.

“Luckily we’ve got some animals at the house” — chickens, ducks — “and we keep them for the end of the month,” she said. “It sounds brutal, but my priority is the children,” she said. “We’re fed up and we’re angry!’ shouted her husband, Thomas Schwint, a cement hauler on a temporary 1,200-euro contract.

To a man and woman the Guéret protesters expressed fury at the government, and determination to keep going.

“Their response has poisoned the situation even more,” Mr. Depourtoux said. “The citizens have asked for lower taxes, and they’re saying, ‘Ecology,’” he said in a reference to Mr. Macron’s speech of last week where he outlined France’s plans to transition from fossil-based fuels to renewable energy.

At the roundabout, Laurent Aufrere, a truck driver, was deciding which of that day’s meals to skip.

“If I stop rolling, I die. This is not nothing,” Mr. Aufrere said. “What’s happening right now is a citizen uprising.” 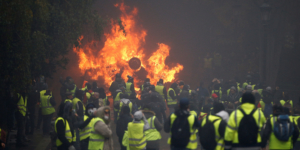