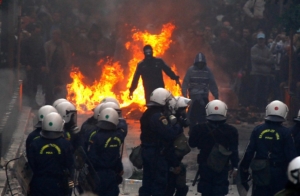 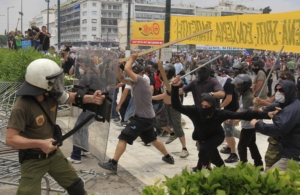 Greece became a world news report center during the revolt of December 2008 after the assassination of 15 years old boy Alexis Grigoropoulos, by the Greek police in Exarchia square, the stronghold of anarchists and leftists in Athens for the last 40 years. The global economic crises brought Greece again in global news focus from 2010 to 2012 as the collapse of Greek economy activated a general social revolt with the participation of the majority of the population and a serial of social experimentations in self-organization, horizontal assemblies, general strikes, mutual help movements and confrontation with authorities. After the election of left party “Syriza” in the government in 2015 and the appearance of neo-nazi party Golden Dawn the social movements continue to offer alive paradigms of resistance. In our days Greece appears as the country with one of the strongest anarchist movements in the world.

Two members of Void Network [https://voidnetwork.gr], Sissy Doutsiou (actress, published poet and essayist) and Tasos Sagris, co-editor of the books “We are an Image from the Future- The Greek Revolt of Dec. 2008 (AK Press 2010) and “From Democracy to Freedom” (Crimethinc, 2018) will create a public dialogue about social movements in Greece as also about the international co-ordination of the struggles.

As English society face Brexit and European and Greek national elections come closer the talk will take the form of direct Q&A and will include analysis about democracy, far-right and left governments, investigating emancipatory possibilities in the self-organized social projects,  neighborhood assemblies, horizontal anarchist groups and federations, searching for tools and methodologies of creating and defending social centers, solidarity networks and mutual help projects, empowering the fight against the state and capitalism, make antifascist struggles, anarchofeminism and LGBTQI movements stronger, talking about the anarchist movement in Greece and the world today as also share an open invitation for international co-ordination 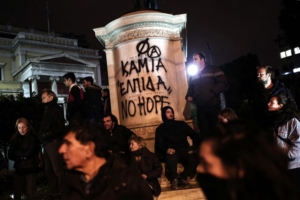 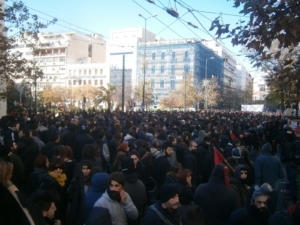 Void Network is an anarchist group that first appeared in 1990 in Athens / Greece with aim the radicalization of every-day life, the social question, the arising of critical mind, the ecstatic collective symbiosis, the visibility of diversity, the participation to the social struggles of our times. Other aims are the creation of social centers, self-organized autonomous spaces, the construction of situations in public space and the ephemeral arts. In the last 30 years Void Network organized hundreds events and actions in a weekly base, discussions, multi media lectures and poetry shows, open free festivals, art exhibitions, performances, documentary and cinema shows, organization and participation to demonstrations, street parades and public actions, celebrations, concerts, publications, open collaborative workshops and liberated autonomous public zones for thousands upon thousands of people.

The Cowley Club is a libertarian social centre in Brighton, England, United Kingdom opened in 2003. It provides resources and meeting spaces for groups and individuals active in areas such as workplace and unemployed struggles, international solidarity, animal liberation, ecological defence, feminist and queer activism and opposing the arms trade. Its political identity is close to anarchism or libertarian socialism. It also houses a vegan community café, a bookshop, and free English lessons for migrants. The Cowley Club is named after local activist Harry Cowley and is part of the UK Social Centre Network. More info: http://www.cowleyclub.org.uk/ 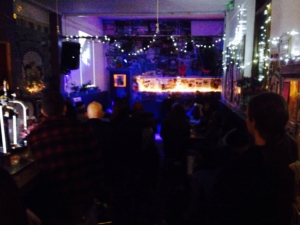 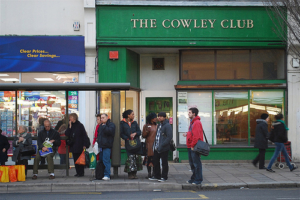 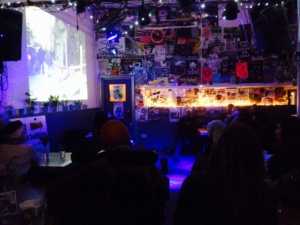