THEY KEPT THE kids in cages. And Excel spreadsheets. And more than 60 other government files and databases that made it nearly impossible to track the thousands of children who have been separated from their parents by the Trump administration while trying to enter the United States.

This is according to a new report released Thursday by the Department of Health and Human Service’s Office of Inspector General, which finds that, since 2017, the Trump administration has separated thousands more children from their parents than it previously disclosed and that it tracked these kids in ad hoc, disparate databases, including Excel spreadsheets and Microsoft Sharepoint accounts, further complicating the already tortured process of figuring outwhere those children are today.

These border separations dominated headlines last spring and summer when then-attorney general Jeff Sessions announced a so-called “zero tolerance” immigration policy at the border, leading to a spike in children being taken alone into the custody of the Office of Refugee Resettlement. At the time, some former HHS employees and legal minds worried that existing governme nt technology was incapable of adequately keeping track of these kids and their parents. The inspector general report not only suggests that those concerns were valid, it also finds that these separations have been going on for almost the entire duration of the Trump presidency, without sufficient technological processes in place to manage them.

“The total number and current status of all children separated from their parents by [the Department of Homeland Security] and referred to ORR’s care is unknown,” the report reads. It lists the “lack of an existing, integrated data system to track separated families” as a central obstacle to reunification.

The report was triggered in part by a court ruling last June as part of a class-action lawsuit, Ms. L v. ICE, which ordered the government to identify and reunite children who had been separated from their parents by DHS and were in ORR’s custody at that time. The order included an exception for parents who were deemed “unfit or present[ed] a danger to the child.” Around the same time, the public outcry over the Trump administration’s zero tolerance policy was mounting, adding to the inspector general’s decision to investigate the issue.

Without so much as a unified database in place, the government was left scrambling to meet the court ordered deadline. Finding these children at all required a crisis management task force at the Office of Assistant Secretary for Preparedness and Response to mine dozens of systems for adults and children with the same last name, who were apprehended at the same place on the same day. Government staffers manually reviewed the case files of the roughly 12,000 children in ORR’s custody at the time of the court order, and relied on shelters to report any children they believed were separated and within their care.

In July, ORR told the court that 2,654 children fit that description. The OIG’s report finds that even at that time, staffers believed another 50 to 100 children were, in fact, eligible, and decided not to include them in their count in order to meet the court deadline. That number continued to fluctuate through December of 2018, as officials discovered additional kids to be added to the list.

The number currently stands at 2,737. According to the report, 159 of those children remained in ORR custody as of last month. Of that group, 28 have parents who the office considers unfit or dangerous, another 28 were determined not to have been separated from a parent, and 95 have parents who declined to be reunified. (Reports have surfaced of parents saying they were coerced into giving up their rights to be reunified.) Now, ORR is working to reunify or “discharge” the eight remaining children.

But even these numbers don’t tell the whole story. According to the report, ORR staffers started informally tracking separations in 2016, enough to notice a spike in the number of separated children being referred to them by DHS in the summer of 2017, nearly a year before the zero-tolerance policy was introduced. The percentage of unaccompanied minors who’d been separated from their parents rose from .3 percent in 2016 to 3.7 percent in August of 2017. This runs counter to President Trump’s claims that President Obama “had the exact same policy.” In addition, these children were, according to an email reviewed by the inspector general, often very young and needed to be placed in specially licensed facilities, which sometimes resulted in a shortfall of available beds.

And yet, the court in Ms. L v. ICE didn’t require the government to count any of these children as qualifying for family reunification, the report says. That means that the estimated thousands of children who were sent to and released from ORR custody before the court case have gone unaccounted for in this national conversation. The report also notes there is no fixed legal definition for what constitutes “separated children,” making it too easy for kids to fall through the cracks.

The report lays bare the glaring lack of administrative preparation that went into a sweeping policy change that would come to affect thousands of families. This haphazard system resulted in children who were eligible for reunification being identified some five months after the original court order. Stories have abounded over the last year of separated children suffering psychological trauma. Now it appears that the scope of the problem is even larger, and has been going on for far longer, than was previously known.

ORR modified its case management system in July so that staff can now indicate whether a child was separated. But, according to the report, “It is not yet clear whether ORR’s recent changes are sufficient to ensure consistent and accurate data about separated children, and the lack of detail in information received from DHS continues to pose challenges.”

In a letter responding to the report, Lynn Johnson, the assistant secretary of the Administration for Children and Families, said the agency “generally agrees with OIG’s findings” regarding the number of children eligible for reunification under the court order. But Johnson pushes back against its assertions about the thousands of children who went largely uncounted prior to the court order, saying that ORR has no requirement to track those children. “Even if ORR were to invest a substantial part of its limited resources in a count of prior DHS separations, the count would not fulfill any current operational needs or enable HHS to provide any form of relief to discharged children,” Johnson writes.

The United Nations’s high commissioner on human rights has described the border separation policy as an “unconscionable” violation of the rights of children. 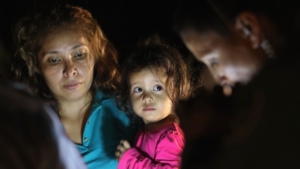