On 12 July, hundreds of Gilets Noirs (black vests) occupied the Panthéon building in Paris – the mausoleum in which the French state keeps the remains of its most revered historic figures – to demand an end to the persecution, deportations and exploitation of migrants.

Police violently raided the building and made 36 arrests. 17 people were released after further demonstrations, but the others have been taken to the Vincennes detention centre. You can donate to the crowdfund for organising for the release of the detainees here.

Below is the statement on the occupation, via Bulletin. 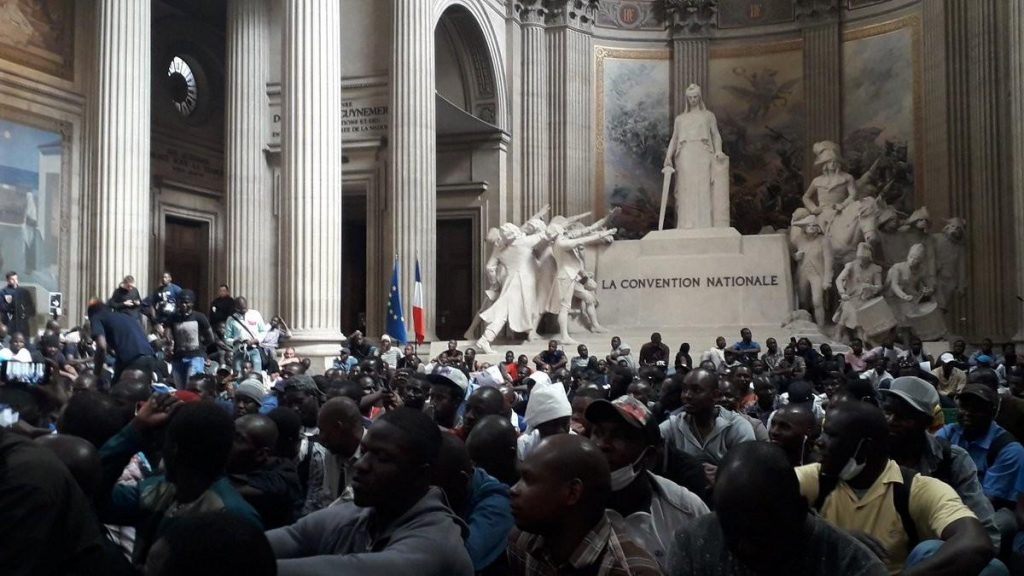 Rise up, those who have died!
Today, we, migrants without papers (sans-papiers), those living in detention centres, inhabitants of the street, occupy the Pantheon.

We are those without papers, without voices, without faces for the French republic. We come to the tomb of your great men to denounce your sins, those against the memories of our comrades, our fathers and our mothers, our brothers and our sisters in the Mediterranean, in the streets of Paris, in the detention centres and the prisons. France continues slavery by different means. Our fathers died for France. And those who have died, are dead. Responsibility falls to the living, to those who are in power today. The dead shall rest in peace.

The day before yesterday, we attacked the borders by occupying the Air France terminal of Charles de Gaulle airport. It is there that the French police throw us into airplanes towards Algiers, Dakar, Khartoum, Bamako or Kabul. It is from there that Djiby, our comrade, was deported.

Yesterday, we invaded the offices of Elior (a French multinational catering company) in the La Défense district, and the General Labour Directorate. We went to tell the bosses who humiliate us and break our backs that fear has changed sides!

Today, we continue to attack the State and its racism, in France and in Europe. We come to defend our dignity! We will no longer plead with anyone and we will seize our rights by the force of struggle!

We have come to tell you that the motto of France for foreigners is humiliation, exploitation, deportation. France, which conducts war elsewhere, pillages our resources and makes decisions for and with our corrupted States. France, which wages war against us here.

Because there are 200,000 empty houses in Paris, and our people are sleeping under the bridges of the ring road; because yesterday the municipality fenced off the streets of the Avenue Wilson camp at Saint Denis.
Because in the detention centre of Thiais, like in all the others, the police harassed the inhabitants all the way to their rooms.
To demand the liberation of our Gilets Noirs comrades, imprisoned in detention centres, and freedom for everyone else too.
For the abolition of these prisons for foreigners!
We do not fight only for papers, but against the system that creates people without papers.
We will no longer pay a cop or a receiving agent to obtain an appointment.
We do not want to have to negotiate anymore with the Minister of the Interior and his prefectures.

We want to speak to the prime minister Edouard Philippe, now!

Papers and housing for everyone!
Freedom to move and to stay!
Long live the struggle of the Gilets Noirs!

Neither the streets nor the prison, papers now!