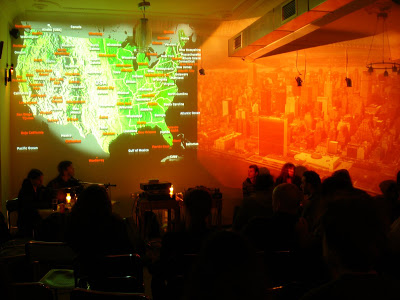 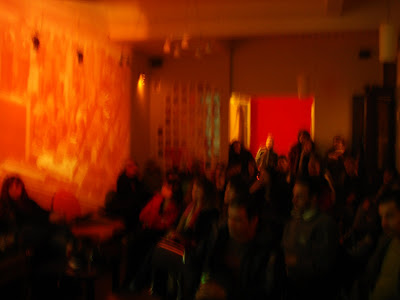 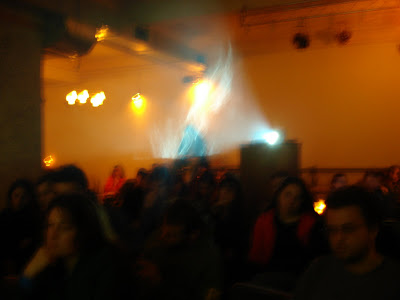 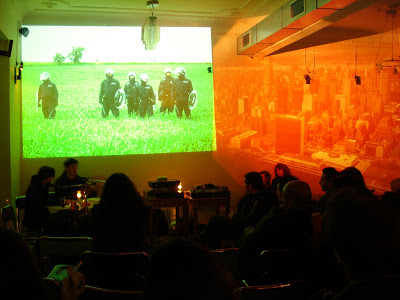 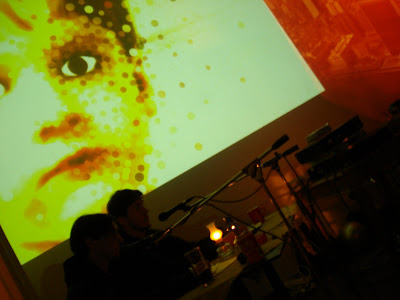 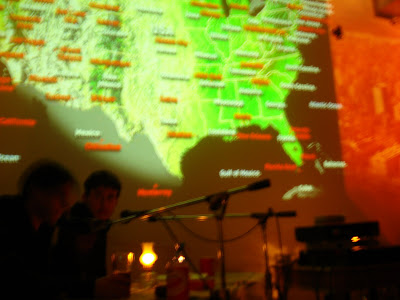 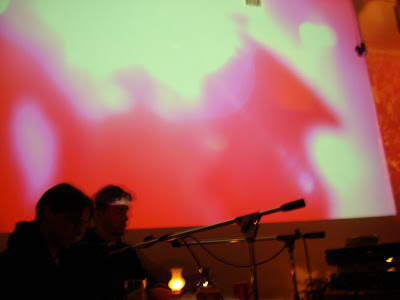 Peter Gelderloos is an influential young American anarchist writer.
He traveled during 2007 for six months in all Europe and he made many efforts (through publications of pamphlets, lectures and organizing) to help the antifascist and anti-homophobic movement in Eastern Europe and Balkans.
His ability to build up arguments and debate is incredible and this helped us a lot to understand very well the condition of the anarchist movement in U.S.A. as also the problems and the limitations that the American commrades face. More than 150 people came to his lecture “Anarchy in the USA”  in Free Social Space Nosotros in Exarchia in 7 March 2007 and for almost 3 hours Peter Gelderloos used the American map to explain to us what is happening in all areas and answering all our questions.

Void Optical Arts Laboratory made some great atmosphere with a special made for that night multi media show and d.j. Kinomatix played experimental ambient electronica after the end of the lecture.

1.
Why are you an anarchist?
I am an anarchist for a variety of reasons, related to my personality, my lived experiences, my analysis of the world around me. Every day I find new reasons, many coming down to the fact that nobody will ever know how to fulfill my own needs better than myself, and as long as an elite authorizes itself to control my life, I have to fight it. A big influence: I spent six months in prison for an illegal protest, and at this point I could never feel completely happy as long as I knew someone was sitting behind bars, as long as our society responds to conflict with punishment and separation rather than reconciliation and cooperation.

2.
Do you think that if we drop out from our universities, our jobs, our properties we will make a starting point of a “free” life?Yes, dropping out is surely a starting point for building a free life. Staying in the universities, in our jobs, is also a starting point. The starting point is here under our feet. Winning autonomy and truly free time by dropping out can allow us to carry the war back to the system, and build the foundations of a culture that can replace capitalism. But not everyone can drop out—prisoners, working mothers, peoples facing genocide. Dropping out takes a basic amount of privilege, and it has caused problems that many drop-outs in the US have not recognized this and created an arrogant subculture, believing that if you don’t ride a bike or dumpster-dive you’re not an anarchist. It’s purism. We’re all part of the system, and if we could truly drop out there would be no need to fight. But capitalism and the state are not voluntary. Remaining within the system where school or jobs are concerned can allow us to keep in contact with other people, understand their reality, and spread our ideas to them. It’s a balancing act: go too far in one direction, and you isolate yourself. Go too far in the other direction, and you co-opt yourself, bind yourself to the system. In both scenarios, the state wins.

Everybody is very imprisoned, even those who think they have dropped out. Fortunately, in Greece people do not have a cop in their heads to the same extent as in the US. Please: keep it that way! But one thing that seems to me a little more developed in the US, though it’s still at such a rudimentary stage, is uprooting authoritarian modes of communication and views of conflict, things that escape the attention of most anarchists I think. This means overcoming patriarchal behaviors, creating conversations where women participate equally, and getting rid of heteronormative and binary prejudices that exclude transgender people and queer people. This means recognizing that gender violence is even a problem among anarchists, and we need to find supportive ways to end the cycles of abuse that have gone on for millennia. This means appreciating the need to develop methods of conflict-resolution based in a mentality of healing and meeting needs rather than punishment or right and wrong. If the state collapsed today, anarchists still might not be able to make a revolution. Here I’m speaking very much about prison. We rely on prisons. If one anarchist raped another (this happens, though often it gets ignored) what would we do? Saying that such a person is not an anarchist, exiling them, is no solution. Isolating and punishing the guilty person is no solution, as the experience of the state has shown. Do we even know what we would do without prisons?

Well, very often our actions are just a drop in the ocean. In my town there’s only a dozen anarchists. Most of the rest of the people who live there probably don’t know we exist. But sometimes we are a wave, and sometimes even a tsunami. In 1999, anarchists in Seattle captured, or at least disturbed, the imagination of the entire country. Here in Greece, you have the entire country talking about you, the media “malakes” and some government members are acknowledging it’s a war. In Exarchia, I think the anarchist posters outnumber the advertisements. This needs to happen everywhere. I could say that if the world would end tomorrow I would still rebel today, and this is true, because fighting for liberation is a part of being alive, not just a calculation for the future. But I do not want revolution to be the opiate of the anarchists. This would all be an insult if we were not fighting to win. To transform the metaphor, it’s not an ocean, it’s a manmade reservoir, and the people who made it and who maintain it knew and still know what they are doing, they have been strategic. We also need to be strategic, to expand these moments when we are a tsunami, and understand what makes them possible so we can expand the foundation too. This is not a call for a single strategy, because that imperative shares many characteristics with the state. The state is best attacked from many angles, but it knows very well how to manage a herd and a chaotic crowd. We need to think more about how to take these little drops, these opportunities before us, and change the landscape, undermine state power, spread rebellion, and win.

5.
What is your opinion about the debate and the conflict among the anarchist traditions and their strategies?

I think both sides of the various debates occasionally make very intelligent, thought-provoking points. But much of the time, it’s stupid, egotistical and orthodox squabbles that should be the monopoly of religious scholars. Many anarchists seem blind to the real spirit of Authority, and they cling to central values of Western civilization, like monotheism, objectivity, the right of intervention. There are many different kinds of people, people with different needs, so it follows that there should be many anarchists strategy. But we Western anarchists too often see differing strategies as evidence that one side is right and the other is wrong. We make a dichotomy or a crusade where there should be a tension or a balance. We may not believe in one God, but we still believe in one Truth, and we also think we have the right of the missionary to impose this truth on other people. I think this is a reason that nearly all anarchists are white. The tradition is Eurocentric, and we don’t listen enough to other people, don’t allow other people to adopt anarchism to their needs without denouncing them. In general, I think the “insurrectionists” and the “organizationalists”, to refer to one debate, have different strengths and weaknesses that could complement one another if there were more solidarity, but I think both completely miss the mark when it comes to understanding the importance of white supremacy as a system of hierarchy and oppression as important as capitalism or the state. Some people reduce everything to class and minimize the experiences of people who have been oppressed in completely different ways, and others act as though everyone is oppressed in the same way, that because race is based on a lie we should ignore its very real effects. In Mexico, people have developed an indigenous anarchism (for example the Magonistas in Oaxaca). Clearly this is a powerful tradition, and it replaces the Western monotheism with a pluralism from some local indigenous cultures. But condescendingly, most white anarchists have ignored this development. But if we cannot learn from allies, we are a dead movement.

Peter Gelderloos was born in Morristown, New Jersey and lived in Tokyo, Seoul, and Vienna, Virginia during his childhood. He studied literature, foreign languages, and anthropology at James Madison University in Harrisonburg, Virginia, but dropped out without completing a degree.[1]

In 2001, Gelderloos was part of the protest against the Georgia-based Western Hemisphere Institute for Security Cooperation (formerly known as School of the Americas), a controversial school that trains Central and South American soldiers and police. He was one of seven protestors who presented the base with an indictment for violating federal and international law and was subsequently arrested.[1] He was convicted and served 6 months in prison.[2] He was one of four people from the Harrisonburg area to be arrested at the School of the Americas protest that year, along with David O’Niel, Lee Sturgis, and Abi Miller.[2][3]

In April 2007, Gelderloos was arrested in Spain and charged with public disorder and illegal demonstration during a squatters‘ protest. He faced between three and six years of imprisonment. Eventually he was acquitted.[7][8]

In 2010 Gelderloos published Anarchy Works, a comprehensive book explaining basic principles of anarchism and their historic usage. He also published To Get to the Other Side, a narrative of his travels through Europe’s anarchist milieus.

by Wayne Price **Many people regard anarchism and socialism as contradictory programs. This is based on