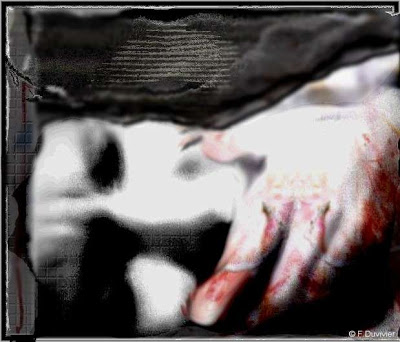 To be done with the judgement of DOG

Part one
SCRATCH N SNIFF
The history of performance/performance art and all other possible mutations of this word (structure) are actually non-existent as far as the reality/history of our own KULTUR is concerned. And this is because there is no history that has had it’s own autonomous development. There have been no diversions. There have been no mutations. There has been no constructive/destructive plagiarism. The home-grown artist as a young dog has been that of sniffing the shit of others on the pavement and then shitting themselves on our streets. Some would call this the copy paste method of working which does have a heritage in our KULTUR.
Part 2
WE ARE ALL EXOTIC CREATURES or EGO STIP TEASE A GO-GO
That a thing is done live and that this thing is self-referential does not make it art (or non-art). It usually makes it what it is and what it is, is what it started as: the insatiable need for someone (or more) to project their ego and to be applauded for the depth (singularity) of their character (and all that is composed of).
Part 3
JUST IN CASE YOU DON’T READ OBITUARIES
Performance is dead. It has been for a while. It is only alive in our own KULTUR. There are obvious reasons for this, some have been mentioned above. Of course performance has been replaced with other codes and forms-perhaps we will see these new forms after 5 years when they are as dead as performance is now. Because I don’t feel like writing anymore about corpses, I will summarize: Do we really need a history lesson on performance or do we want to deal with new emerging structures? Do we want to be treated as the semi-literate who are in need of didactic force feeding or do we want to throw and purge new ideas?

Part one
THE CORPSE
performance is dead…the artist is a well payed worker as much as the audience…live performance is dead…the live band is a capitalistic corpse…concert is dead…its fucking boring market, the 30something workers came exhausted after work to drink a beer and see the deadheroes playing/the young people don’t have the money to come in/ its fucking boring / (that’s why is obviously better bussiness to import a dead group from 70s to play in athens than a new unknown name / to export a new group from Athens to London is not included in market at all)…festival is dead…the escapism of a weekend is not enough anymore to turn the slave to a liberated, creative being…art performance is dead…the artist is an exhausted worker putting all efforts on making career as a corpse…
Import of arts is a great market / export of arts is not existing even as idea/It seems that arts not existing at all in Greece as long is not a product that can be exported / Olive oil is much more profitable Greek product than the greek artists for sure
Part 2
ORPHEUS PARADIGM
We need new ways of everyday life>>new relations>> new companies of friends / we need strong links of friendship>>new trusts>> friendship must be the new wave of social performance>> “interdependence is the key word”>>tenderness can be new hype>> public sex can be very inspirational>>autonomous spaces must destroy the clubs and the concert halls as fast as possible>> places that you don’t feel shy to puke on the floor must replace all galleries>> museums have to burned down in insurrectionary ecstasy>> squats and rented buildings have to open to the crowd and tranformed in mobile buildings>> turn buildings to squares>>SOS>>TURN BUILDINGS TO OPEN PUBLIC SQUARES>>>new kinds of social relations and new kinds of spaces can accomodate an arising of non-employed art contexts>>without life and space liberated from conformity and market there is no reason to thing about anything/that’s why art is dead>>with people liberated from work and with spaces liberated from market and conformity…then you can have new context of arts and living>>until the next step>>and until the future downfalls>:to fight against a corpse is better than to be a corpse for yourself>>this is the only logical reason that you can continue to be in the world of Great Arts>>is like orpheus travelling in the world of the dead to find his beloving…He will find just a corpse but the fight will make him a poet>>>>>>>>>>to be continued>>>>>>>>>>>>>>>>>>>>>>>>>>.
“notes about corpses” by Anastasios Sagris>>>>>>>>>>>>>>

the digital painting of this post is found in
http://www.damagedcorpse.com/digital-collages/cell6/image/
and is made by F.Duvivier