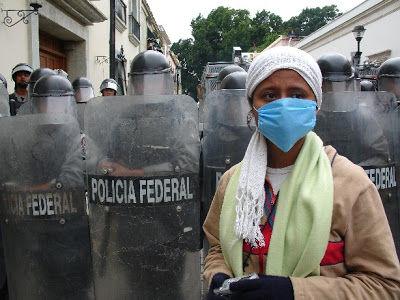 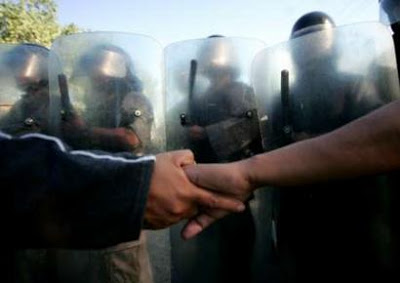 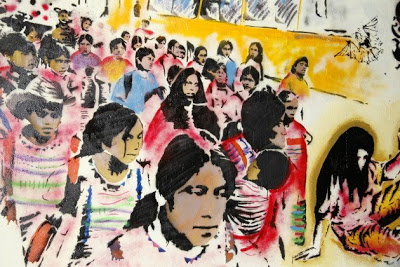 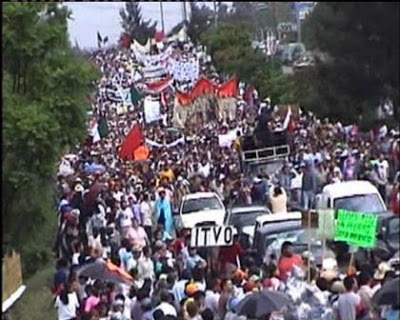 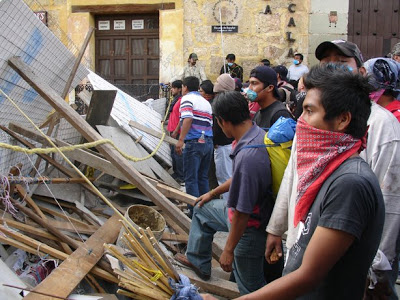 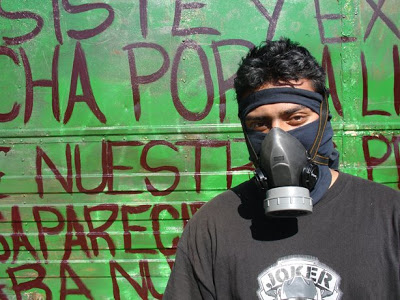 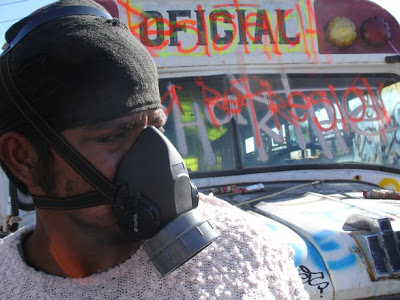 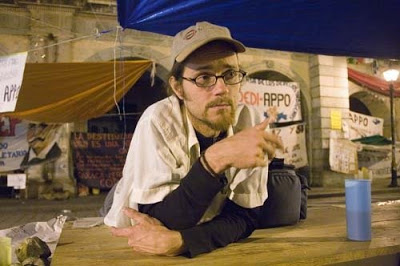 In the memory of Brad Will

by Mexican police and

On the dawn of Friday, October 27, 2006, news about the assassination of the New York independent media reporter Brad Will by paramilitary forces in the southern state of Oaxaca, Mexico reverberated throughout the world. This day marked the beginning of the direct state-sponsored offensive towards the Oaxacan people who had tired of the repression and corruption of the governor Ulises Ruíz. For almost six months they have peacefully organized to remove him from office. Ruíz has been the subject of an escalating conflict. He was elected in August 2004 through fraudulent means and since then has persistently used brute force against social and political organizations. The repressive tactics of the governor have sharpened the conflict.

Yet that Friday, six barricades across the city of Oaxaca were under attack at the same time by paramilitary forces including the barricade where Brad Will lost his life reporting. The results of these premeditated attacks were three dead and 23 members of the popular movement injured (see oaxacalibre.org). But even worse, the death of Brad Will would serve as the perfect excuse for the federal government to enter Oaxaca with all its repressive might despite almost six months of neglect amidst the plea of civil organizations and the people of Oaxaca to intervene in the conflict.

The Teachers Struggle for a Dignified Education

The conflict between the state and the Oaxacan people began May 22 as thousands of teachers belonging to section 22 of the teachers union initiated a strike pleading for a raise of their wretched $460.00 monthly salaries, as well as a monthly bonus for teachers living mostly in the tourist areas where the cost of living is disproportionately high in comparison with the rest of the state. There are 15 more demands related to funding for school materials, children’s uniforms and free school breakfasts.

Every year, the teachers strike for such demands and until 2006 negotiations would occur. This time around, Ulises Ruiz’s government first threatened the teachers and later brutally evicted them from the town plaza where the governor’s headquarters is located. Haunted by the nightmares of recent state violence in Atenco, Mexico, where peasants sympathetic to the Zapatistas stopped the development of an airport, 300,000 inhabitants of Oaxaca poured into the streets, outraged. They protested the state violence and marched through Oaxaca demanding the governor’s immediate resignation, perhaps, one of the biggest civil protests in Oaxacan history. During the march the previously evicted teachers would once again reclaim the central plaza. This event would unite dispersed and divergent organizations and groups into one organization the Popular Assembly of the People of Oaxaca. Their goal: the immediate resignation of the state governor Ulises Ruiz.

Ya Basta! (Enough!): The Formation of the Popular Assembly of the People of Oaxaca

On June 17, the Popular Assembly of the People of Oaxaca (APPO by its Spanish acronym) was born. It would challenge the state government through pacifist means, with words, ideas and most importantly dignity. Local unions, peasants, students, women and environmental organizations, indigenous communities, teachers and whole families from across the state united to form this radical organization. Their collective process of decision-making and political action has a long tradition among Oaxacan indigenous towns and after the Zapatista armed uprising it has been further revitalized.

On July 5, as the Mexican people contested the election where rightist Felipe Calderon was declared victorious, the APPO reclaimed the government headquarters situated in the central plaza of the city and declared itself as a parallel government of the state of Oaxaca. Recently, governor Ruiz had transformed this headquarters into a museum due to the all too frequent protests of “dirty” Indians, rural teachers, and all those from below. Oaxacans were infuriated watching the governor cynically respond to the interests of foreign investors and tourists. During July and August, the APPO also reclaimed the Guelaguetza —a yearly celebration where the 7 regions of Oaxaca represent through performances their culture— that had was one of the main tourist attractions. It had become a corporate enterprise guided by the leading businessmen of Mexico. They would also reclaim the local media, 12 radio stations and for small periods of time the local TV station. They reclaimed what was, in their words, of and for el pueblo.

Furthermore, the radio stations would become the heartbeat of the APPO, through which they would organize across Oaxaca, calling people to regional and general meetings, and to inform the people of local agreements, mobilizations, road blockades, food and first aid needs. In August, that is how they organized the takeover of the city of Oaxaca. The radio would also serve to inform human rights organizations if violations were committed. Many of us following the movement from afar could access the Oaxacan radio broadcast through the web and international supporters could mobilize almost instantly.

Although the struggle of the APPO is rooted in the local politics of Oaxaca, they have clearly bridged it with anti-globalization and social justice movements across the nation and the world. The lived experience of fraudulent electoral politics in Oaxaca fueled a rather strong sentiment against the presidential elections. The people would chant vociferously: “Ya cayo, ya cayo Ulises ya cayo. Si no hay solución también caira Calderon” (“He fell, he fell, Ulises fell and if there is no solution so will Calderon”).

The effects of the conflict on the lives of the Oaxacan people are very complex: the salaries of the approximately thirty thousand teachers in the struggle have been cut off, many small businesses in the region have no customers, vendors of local produce have not sold one piece of corn or squash, many members are jobless due to the conflict. Yet, they are able to resist because the people draw upon years of experience of autonomous collective organizing visible in the forms of everyday resistance. The indigenous communities, the peasant communities, the popular neighborhoods and other supporters of the APPO deliver daily to the barricades and encampments tortillas, stews, water, hot coffee and chocolate. At the same time, representatives of organizations come and go in groups from all over the state of Oaxaca, some people travel up to 12 or so hours to get to the city. They come with banners supporting the groups and with musical instruments from their local towns. They take turns guarding the barricades, the radio stations, the government headquarters, and the main roads to the city.

Members of the APPO speak many different languages; they come from the 16 indigenous groups that make up the state of Oaxaca. There is also representation from the Afro descendant communities from the coast. Thus, they all come from different experiences of struggle, from different social positions, and therefore, from different experiences of oppression. As a woman said on Radio Universidad, “nosotros no somos maestros, somos pueblo, mirenos, somos pueblo, somos pueblo los que estamos luchando por nuestros derechos…hasta que Ulises se vaya no vamos a parar” (“We are not teachers, we are the people, look at us, we are the people that are struggling for our rights…until Ulises steps down we are not going to stop”).

A Oaxacan Cry for a National Peaceful Insurrection

On October 30, the federal government ordered the federal police to enter the city of Oaxaca. With full armor, thousands of federal police forces entered the city accompanied by tanks and bulldozers to crush the barricades. Simultaneously, police helicopters flew throughout the city. Oaxacans were expecting them. Days before rumors of the police takeover had spread throughout the highlands, cities and coast of Oaxaca. Groups of people from every corner of Oaxaca had come to the city to defend it from the government forces. The barricades were reinforced. School buses were placed in the middle of streets. Tires, chairs, pieces of wood, doors, anything and everything was used to stop the federal government’s repressive forces to enter. At the same time, however, the radio announcers coordinated the resistance and desperately called for a national peaceful insurrection to stop the government offensive. The Oaxacan people had agreed to resist peacefully, so as the tanks entered they would gather at each entrance by the hundreds trying to intimidate the police activity. Some would burn tires in order to prevent the visibility of the helicopters. Some would fearlessly jump on the tanks and spray paint on the windows to disable them. Many times they were successful, many times they were not. The tanks rolled over the streets spraying high-pressure water mixed with chemicals to knock down the thousands of protesters. Many photos and video show young kids, women, students, peasants, mothers and elderly trying to stop the police forces with their bodies. At the end of the day, dozens were imprisoned and taken to the army headquarters, dozens disappeared, many were injured and at least four were found dead. The police forces secured the center plaza displacing all the resistance to the Autonomous University of Oaxaca where legally the state could not enter.

A few days later, on November 2, in an attempt to demolish the university radio station, the organ of resistance and organization, the police forces once again confronted the Oaxacan people. On the radio, nationally and internationally we followed the resistance. We heard the Oaxacans battling, calling for reinforcement, for vinegar and coke to wipe the tear gas from their faces, for solidarity across the globe. This time however, after hours of confrontation, the police forces withdrew. Elated, thousands of Oaxacans celebrated what seemed impossible: the unarmed resistance for a government of the people and for the people. We heard through the radio a shrill scream of a woman saying, “Comrades today we are filled with glory. There are present a million people. We defeated them. We defeated them. We want Ulises Ruiz to leave Oaxaca right now and never to return because we will kick him out like we did today with the police forces.” The APPO’s demand is not only for the governor to resign, but also for dignity. They will not stop until the illegitimate government of Ulises Ruiz steps down from office. Additionally, APPO’s initiative of nationalizing the movement has already been taken up by many organizations through out the country, including the zapatista communities.

Today, popular assemblies are emerging throughout Mexico and the United States. This past October in Los Angeles, California, various indigenous groups, like the Mixtecs, the Zapotecs, the Mixes, the Binational Front of Indigenous Organizations (FIOB), together with the Mexican and Mexican-American organizations like Unión del Barrio y UCLA Raza Graduate Students formed a transnational APPO. Likewise, the Zapatistas have called for a nationwide shut down on November 20 during the national celebration of the Mexican Revolution in solidarity with the Oaxacan struggle.

Today this movement is the largest grassroots movement in Mexico since the 1968 student movement and promises to grow as different social movements across the nation adhere to it. We look once again to the South, where dignity infuses the global struggle for justice.

the article appeared in:

for more info about the death of Brad Will you can read the article
Mexico Presents Flawed Theory in Shooting Death of American Journalist
http://docs.google.com/View?docID=dd99p3r5_6g7fzs5k8&revision=_latest

A Report From Magónistas On The Impact Of COVID-19 In Mexico. We must bear in mind