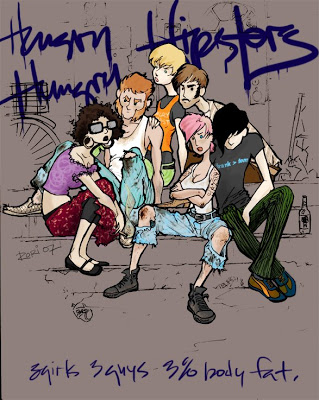 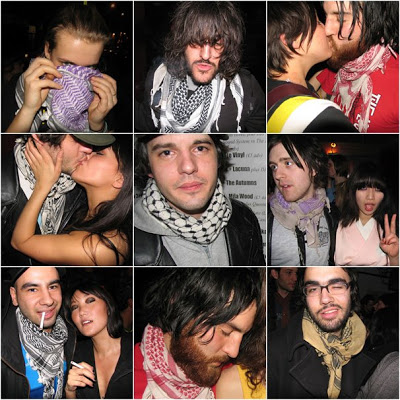 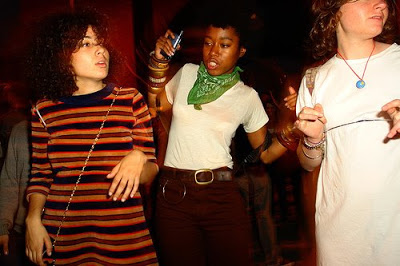 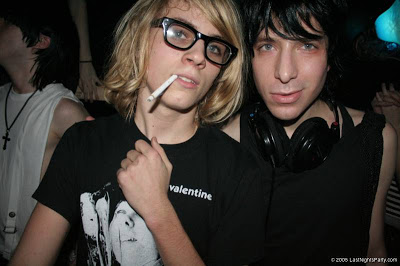 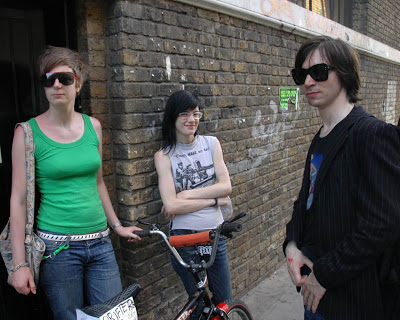 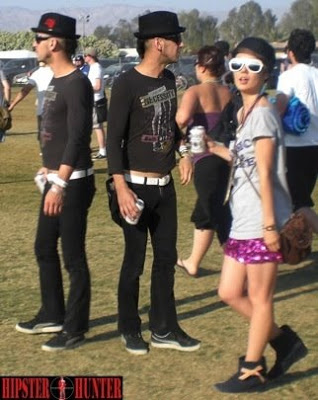 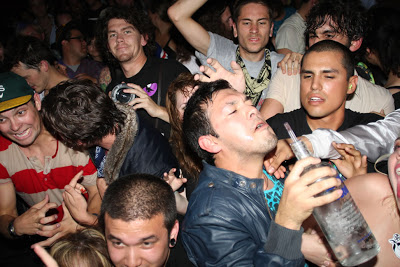 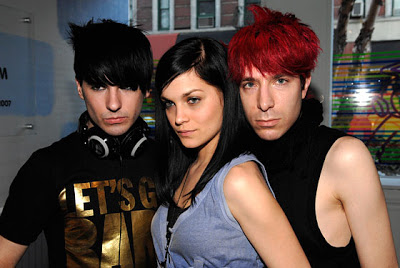 We’ve reached a point in our civilization where counterculture has mutated into a self-obsessed aesthetic vacuum. So while hipsterdom is the end product of all prior countercultures, it’s been stripped of its subversion and originality. (Cover story of Adbusters Issue #79.)

Hipsters: The Dead End of Western Civilization by Douglas Haddow

I‘m sipping a scummy pint of cloudy beer in the back of a trendy dive bar turned nightclub in the heart of the city’s heroin district. In front of me stand a gang of hippiesh

grunge-punk types, who crowd around each other and collectively scoff at the smoking laws by sneaking puffs of “fuck-you,” reveling in their perceived rebellion as the haggard, staggering staff look on without the slightest concern.

The “DJ” is keystroking a selection of MP3s off his MacBook, making a mix that sounds like he took a hatchet to a collection of yesteryear billboard hits, from DMX to Dolly Parton, but mashed up with a jittery techno backbeat.

“So… this is a hipster party?” I ask the girl sitting next to me. She’s wearing big dangling earrings, an American Apparel V-neck tee, non-prescription eyeglasses and an inappropriately warm wool coat.

“Yeah, just look around you, 99 percent of the people here are total hipsters!”

“Are you a hipster?”

“Fuck no,” she says, laughing back the last of her glass before she hops off to the dance floor.

Ever since the Allies bombed the Axis into submission, Western civilization has had a succession of counter-culture movements that have energetically challenged the status quo. Each successive decade of the post-war era has seen it smash social standards, riot and fight to revolutionize every aspect of music, art, government and civil society.

But after punk was plasticized and hip hop lost its impetus for social change, all of the formerly dominant streams of “counter-culture” have merged together. Now, one mutating, trans-Atlantic melting pot of styles, tastes and behavior has come to define the generally indefinable idea of the “Hipster.”

An artificial appropriation of different styles from different eras, the hipster represents the end of Western civilization – a culture lost in the superficiality of its past and unable to create any new meaning. Not only is it unsustainable, it is suicidal. While previous youth movements have challenged the dysfunction and decadence of their elders, today we have the “hipster” – a youth subculture that mirrors the doomed shallowness of mainstream society.

Take a stroll down the street in any major North American or European city and you’ll be sure to see a speckle of fashion-conscious twentysomethings hanging about and sporting a number of predictable stylistic trademarks: skinny jeans, cotton spandex leggings, fixed-gear bikes, vintage flannel, fake eyeglasses and a keffiyeh – initially sported by Jewish students and Western protesters to express solidarity with Palestinians, the keffiyeh has become a completely meaningless hipster cliché fashion accessory.

The American Apparel V-neck shirt, Pabst Blue Ribbon beer and Parliament cigarettes are symbols and icons of working or revolutionary classes that have been appropriated by hipsterdom and drained of meaning. Ten years ago, a man wearing a plain V-neck tee and drinking a Pabst would never be accused of being a trend-follower. But in 2008, such things have become shameless clichés of a class of individuals that seek to escape their own wealth and privilege by immersing themselves in the aesthetic of the working class.

This obsession with “street-cred” reaches its apex of absurdity as hipsters have recently and wholeheartedly adopted the fixed-gear bike as the only acceptable form of transportation – only to have brakes installed on a piece of machinery that is defined by its lack thereof.

Lovers of apathy and irony, hipsters are connected through a global network of blogs and shops that push forth a global vision of fashion-informed aesthetics. Loosely associated with some form of creative output, they attend art parties, take lo-fi pictures with analog cameras, ride their bikes to night clubs and sweat it up at nouveau disco-coke parties. The hipster tends to religiously blog about their daily exploits, usually while leafing through generation-defining magazines like Vice, Another Magazine and Wallpaper. This cursory and stylized lifestyle has made the hipster almost universally loathed.

“These hipster zombies… are the idols of the style pages, the darlings of viral marketers and the marks of predatory real-estate agents,” wrote Christian Lorentzen in a Time Out New York article entitled ‘Why the Hipster Must Die.’ “And they must be buried for cool to be reborn.”

With nothing to defend, uphold or even embrace, the idea of “hipsterdom” is left wide open for attack. And yet, it is this ironic lack of authenticity that has allowed hipsterdom to grow into a global phenomenon that is set to consume the very core of Western counterculture. Most critics make a point of attacking the hipster’s lack of individuality, but it is this stubborn obfuscation that distinguishes them from their predecessors, while allowing hipsterdom to easily blend in and mutate other social movements, sub-cultures and lifestyles.

Standing outside an art-party next to a neat row of locked-up fixed-gear bikes, I come across a couple girls who exemplify hipster homogeneity. I ask one of the girls if her being at an art party and wearing fake eyeglasses, leggings and a flannel shirt makes her a hipster.

“I’m not comfortable with that term,” she replies.

Her friend adds, with just a flicker of menace in her eyes, “Yeah, I don’t know, you shouldn’t use that word, it’s just…”

“No… it’s just, well… if you don’t know why then you just shouldn’t even use it.”

“Ok, so what are you girls doing tonight after this party?”

“Ummm… We’re going to the after-party.”

Gavin McInnes, one of the founders of Vice, who recently left the magazine, is considered to be one of hipsterdom’s primary architects. But, in contrast to the majority of concerned media-types, McInnes, whose “Dos and Don’ts” commentary defined the rules of hipster fashion for over a decade, is more critical of those doing the criticizing.

“I’ve always found that word [“hipster”] is used with such disdain, like it’s always used by chubby bloggers who aren’t getting laid anymore and are bored, and they’re just so mad at these young kids for going out and getting wasted and having fun and being fashionable,” he says. “I’m dubious of these hypotheses because they always smell of an agenda.”

Punks wear their tattered threads and studded leather jackets with honor, priding themselves on their innovative and cheap methods of self-expression and rebellion. B-boys and b-girls announce themselves to anyone within earshot with baggy gear and boomboxes. But it is rare, if not impossible, to find an individual who will proclaim themself a proud hipster. It’s an odd dance of self-identity – adamantly denying your existence while wearing clearly defined symbols that proclaims it.

“He’s 17 and he lives for the scene!” a girl whispers in my ear as I sneak a photo of a young kid dancing up against a wall in a dimly lit corner of the after-party. He’s got a flipped-out, do-it-yourself haircut, skin-tight jeans, leather jacket, a vintage punk tee and some popping high tops.

“Shoot me,” he demands, walking up, cigarette in mouth, striking a pose and exhaling. He hits a few different angles with a firmly unimpressed expression and then gets a bit giddy when I show him the results.

“Rad, thanks,” he says, re-focusing on the music and submerging himself back into the sweaty funk of the crowd where he resumes a jittery head bobble with a little bit of a twitch.

The dance floor at a hipster party looks like it should be surrounded by quotation marks. While punk, disco and hip hop all had immersive, intimate and energetic dance styles that liberated the dancer from his/her mental states – be it the head-spinning b-boy or violent thrashings of a live punk show – the hipster has more of a joke dance. A faux shrug shuffle that mocks the very idea of dancing or, at its best, illustrates a non-committal fear of expression typified in a weird twitch/ironic twist. The dancers are too self-aware to let themselves feel any form of liberation; they shuffle along, shrugging themselves into oblivion.

Perhaps the true motivation behind this deliberate nonchalance is an attempt to attract the attention of the ever-present party photographers, who swim through the crowd like neon sharks, flashing little blasts of phosphorescent ecstasy whenever they spot someone worth momentarily immortalizing.

In many ways, the lifestyle promoted by hipsterdom is highly ritualized. Many of the party-goers who are subject to the photoblogger’s snapshots no doubt crawl out of bed the next afternoon and immediately re-experience the previous night’s debauchery. Red-eyed and bleary, they sit hunched over their laptops, wading through a sea of similarity to find their own (momentarily) thrilling instant of perfected hipster-ness.

What they may or may not know is that “cool-hunters” will also be skulking the same sites, taking note of how they dress and what they consume. These marketers and party-promoters get paid to co-opt youth culture and then re-sell it back at a profit. In the end, hipsters are sold what they think they invent and are spoon-fed their pre-packaged cultural livelihood.

Hipsterdom is the first “counterculture” to be born under the advertising industry’s microscope, leaving it open to constant manipulation but also forcing its participants to continually shift their interests and affiliations. Less a subculture, the hipster is a consumer group – using their capital to purchase empty authenticity and rebellion. But the moment a trend, band, sound, style or feeling gains too much exposure, it is suddenly looked upon with disdain. Hipsters cannot afford to maintain any cultural loyalties or affiliations for fear they will lose relevance.

An amalgamation of its own history, the youth of the West are left with consuming cool rather that creating it. The cultural zeitgeists of the past have always been sparked by furious indignation and are reactionary movements. But the hipster’s self-involved and isolated maintenance does nothing to feed cultural evolution. Western civilization’s well has run dry. The only way to avoid hitting the colossus of societal failure that looms over the horizon is for the kids to abandon this vain existence and start over.

“If you don’t give a damn, we don’t give a fuck!” chants an emcee before his incitements are abruptly cut short when the power plug is pulled and the lights snapped on.

Dawn breaks and the last of the after-after-parties begin to spill into the streets. The hipsters are falling out, rubbing their eyes and scanning the surrounding landscape for the way back from which they came. Some hop on their fixed-gear bikes, some call for cabs, while a few of us hop a fence and cut through the industrial wasteland of a nearby condo development.

The half-built condos tower above us like foreboding monoliths of our yuppie futures. I take a look at one of the girls wearing a bright pink keffiyah and carrying a Polaroid camera and think, “If only we carried rocks instead of cameras, we’d look like revolutionaries.” But instead we ignore the weapons that lie at our feet – oblivious to our own impending demise.

We are a lost generation, desperately clinging to anything that feels real, but too afraid to become it ourselves. We are a defeated generation, resigned to the hypocrisy of those before us, who once sang songs of rebellion and now sell them back to us. We are the last generation, a culmination of all previous things, destroyed by the vapidity that surrounds us. The hipster represents the end of Western civilization – a culture so detached and disconnected that it has stopped giving birth to anything new.

this article appeared in July 2008:

http://www.adbusters.org/magazine/79/hipster.html
(take a look in the comments of this page…is realy interesting)

for more original hipster lifestyle, among many others:
http://stuffhipstersdontlike.wordpress.com

for historical context of the word “hipster” :
http://en.wikipedia.org/wiki/Hipsters

1. Will true pleasure only exist after the revolution, or will it be indispensable to lead