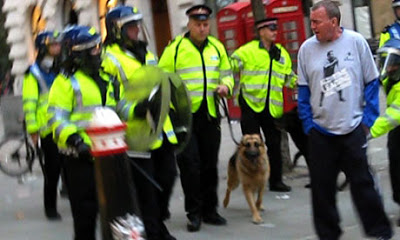 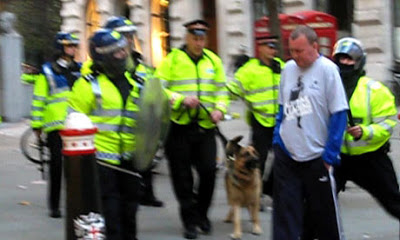 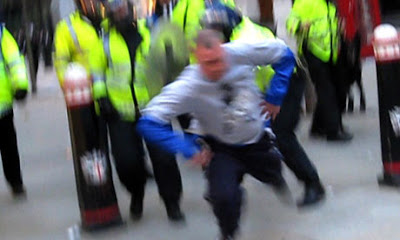 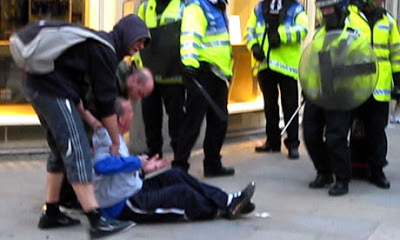 moments after this man died
UK Police Killed a Man
at London G20,
new video evidence:
http://www.guardian.co.uk/uk/blog/2009/apr/07/g20-protest-death-police-assault
Some people have started a call out for actions at UK Embassies at 12noon this Friday, 10 April, to call for charges of murder for the officer who is reponsible for the death of Ian Tomlinson at the G20 inLondon.
There is a new video just in the last few hours (this is being postingnow at 23:13, European time), proving that an unprovoked attack by a masked UK policeman is responsible for the death of an innocent by-stander during the G20 meeting in London a few days ago. A quick search on Google for the name of the killed man:Ian Tomlinson…shows that as of now no international press at all is covering thisstory. Please forward this immediately to every contact you can. We need to make a huge issue of this immediately. All anti-repression groups should look at this, and the guilty officer needs to be immediatelycharged with murder.
FURTHER INFO:
UK Guardian articles:G20 police assault revealed in video:
http://www.guardian.co.uk/uk/blog/2009/apr/07/g20-protest-death-police-assault
Footage shows Ian Tomlinson, the man who died during G20 protests inLondon, being attacked from behind (by masked police)
De Menezes taught the Met nothing:Footage of a police assault on Ian Tomlinson at the G20 demo – moments before he died – suggests their tactics are dangerously wrong
http://www.guardian.co.uk/commentisfree/libertycentral/2009/apr/07/civil-liberties-g20-police-assault-ian-tomlinson
further articles:
http://www.guardian.co.uk/uk/g20-police-assault-ian-tomlinson
G20 activists want public inquiry
Page last updated at 10:38 GMT, Sunday, 5 April 2009 11:38 UK
http://news.bbc.co.uk/2/hi/uk_news/england/london/7984234.stm…
“In a statement, a group calling themselves G20 Witnesses said: “We call for a full public inquiry to look into Mr Tomlinson’s death and thepolice tactics used throughout the G20 protests.”…G20 death man ‘had heart attack’
Page last updated at 02:49 GMT, Saturday, 4 April 2009 03:49 UK
http://news.bbc.co.uk/2/hi/uk_news/england/london/7982855.stm
…”The City of London Police said: “A post-mortem examination found hedied of natural causes.”…
Tags: G-20 LOndon U.K. Police Killed a Man Ian Tomlinson Assasination Video Evidence