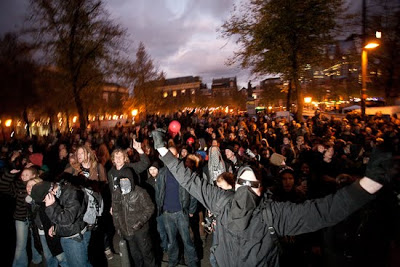 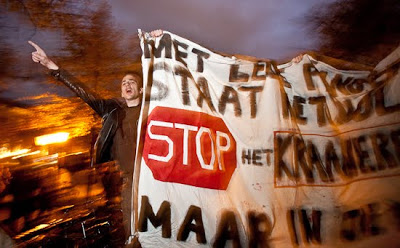 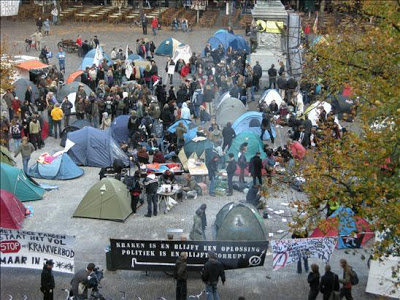 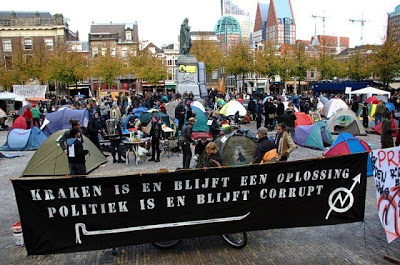 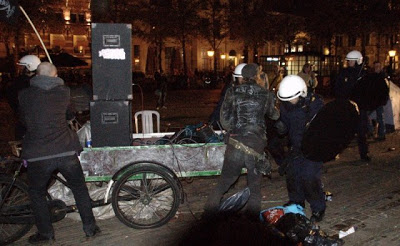 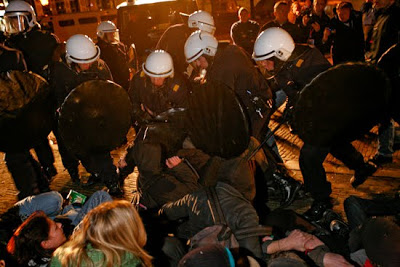 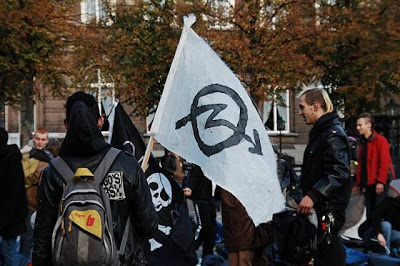 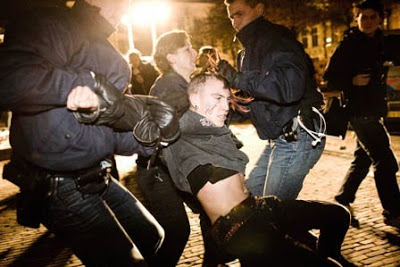 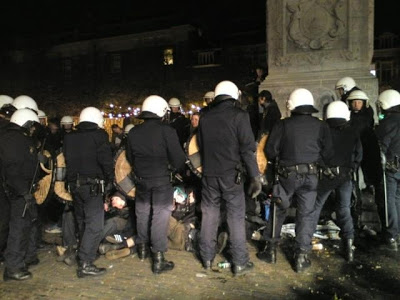 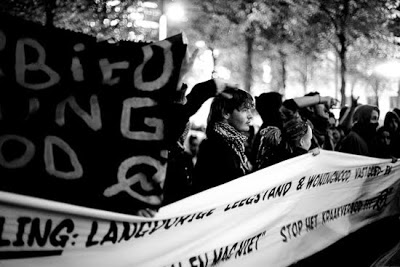 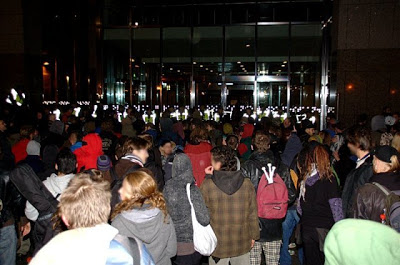 Void Network Announcement:
Following many years of non violent trends, passive resistance, lack of serious confrontation with the State and separation from a society that becomes day after day more conservative the Squat Movement of Holland faces serious attack from the neo conservative Dutch Government and maybe is infront of the most serious thread of total elimination after 30 years of fight…
It starts to become obvious in many countries of long history of Occupations that the first generations of Squatters are militant defenders of their decisions to squat and organize their lives differently and antagonisticaly to the State, the second generation gain a lifestyle of violence without really fight and without creating new squats as they live in already constructed squats or they use legalization process and benefits from the fights of previous generation…and the third genaration forgets how to squat, forgets how to organize serious fight and confrontation, separates from the society and just use the buildings…Until the day that Police comes on their door to finish the fairytales….
It’s a great suffereing for us that the only special international news we recieved all last years from Holland about a serious confrontation of squaters with the State and Capital didn’t include any participation in a social struggle, not any Attack against the regime, not any importnat insurrection or great battle but unfortunately the Defence for the Right to Squat…
Unfortunately for all of us in many other countries that we never had “a constitutional right” to squat and squatting was always “banned”, this struggle that is taking place these days in Holland seems a little bit distant.
Of course we express our solidarity and we care deeply for the fight of the Dutch comrades but we try to remind them that there were some great social and cultural struggles that created the legalization of squatting and have to exist some new great fights and struggles to defend them now
Is just that we think that….
you have to fight for your “right” to Squat, no one will offer this to you.
….And when you forget to fight, when you forget to attack against the regime, when you forget to be dangerous then you forget the ways to gain respect and the State feels this like a night butterfly feels the fire in the night…
Maybe this will be the arising of a great new generation in Holland that will confront the limitations of the previous generations and will fight against totalitarian European regime and fascist European elite with all of us that our squats are anyway “banned” for many years now…
Otherwise this will be the end of Holland Squating movement…. (or, we are wrong and the Dutch movement will make it and they will cuncel the efforts of Dutch neo conservative government to destroy their movement NOW?! We hope we will succeed to overthrough the Dutch government until 1st january 2010! That’s the best way to defend the Dutch squats anyway!)

This is a message from the Dutch movement:

For the last three years a ban on squatting has been in preparation in Dutch politics. A new act that is to ban squatting in the Netherlands has passed through parliament on October 15th. Squatting empty houses that have been empty for over a year is currently still legal in the Netherlands. The new act, an initiative by the Christian Democrats, the Christian Union and the conservative opposition party VVD, is to make squatting a felony punishable by at least one year and up to three years of prison when refusing to evict. Despite strong critique from the High Court, the union of city councils and even the Amsterdam police force, the christian/rightwing majority in The Hague is pushing this law through. Having suffered from an immense housing shortage ever since the sixties, squatting has a long history in the Netherlands and has always been a legal means for thousands of people to acquire a roof over their heads. Not only will all these people be criminalized, no initiative to bring about other solutions for losing their homes has been brought up. This and the complete disregard for the culture that has been created by squatters and their vital role in activist infrastructure has been overlooked.

Currently the senate still has to vote on the new act, but given the same majority of parties that voted in favor in parliament also exists in the senate, odds are by January 1st 2010 all squats in the Netherlands will be up for eviction. Happy new year.

A three year campaign against the criminalization of squats, strongly focusing on improving the public image of the squatting movement has culminated on October 15th in the occupation of parliament square where a tent camp was set up on the day of voting. The moment the bill was voted upon the parliament had to disband as the meeting was disrupted by protest from the spectators bench, which was soon silenced by security and police. Hundreds of squatters on the square made an attempt to enter the parliament building to voice their dissent, but were driven away by riot cops. Later in the evening riot cops violently evicted the entire square, making over a hundred arrests.