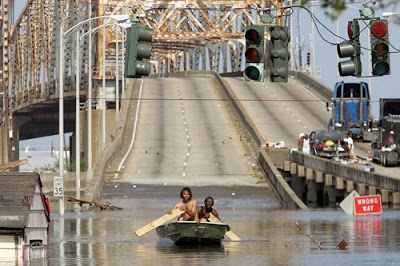 The Climate is Changing… 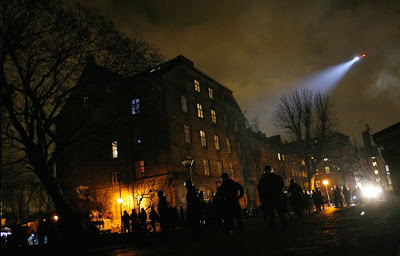 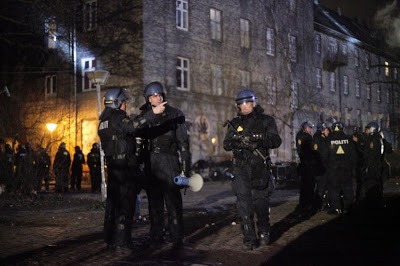 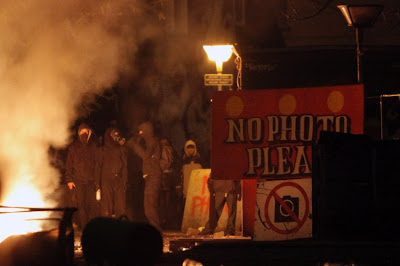 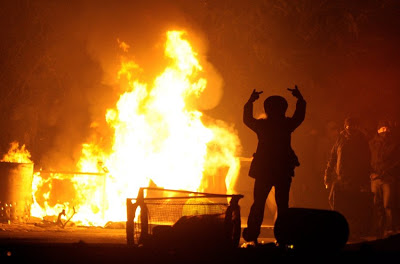 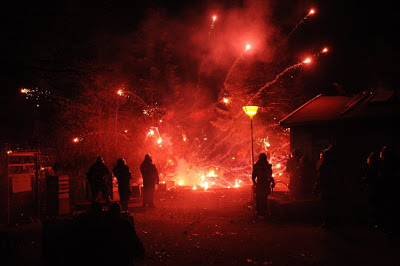 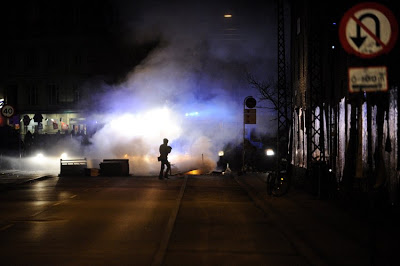 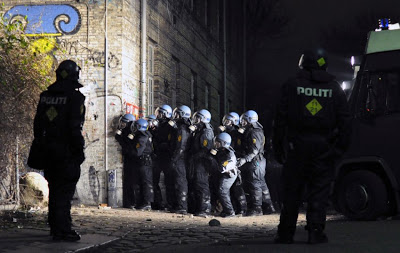 Void Network:
As all of us were expecting
Copenhagen Cop15 Climate Change Summit
was a great fiasco.
Now everyone is sure about it:
Copenhagen Climate Change Summeit
was a total failure…
Is it possible to imagine that the
same economical and political system
destroying our planet, will be the same
one that will save it?
…Isn’t it stupid expecting the ones that
killing our life to change somehow and
starting care for the people
and the planet?…
How is possible the most catastrophic,
mechanistic, inhuman, racistic, barbaric
system that ever appeared on this planet,
Capitalism,
after 200 years of total destruction of life,
culture, humanity and dignity of people,
unthoughtful hard exploitation of animals
and plants, crazy struggle for expanding
of market in all our needs, all our dreams,
merchandising of anything….How is possible
to expect Capitalism that destroyed anything
to save now Planet Earth?
Isn’t it completely crazy?
It is just buisseness as usual for them…
WE WILL DESTROY CAPITALISM
BEFORE IT DESTROYS OUR PLANET! 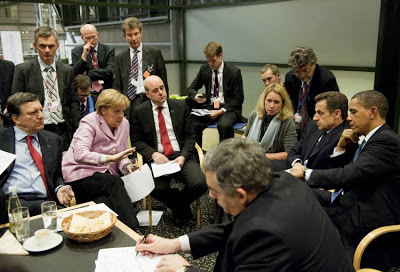 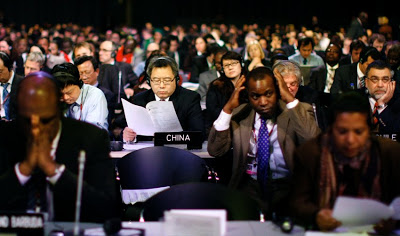 The Climate is Changing
by Crimethic Ex-Workers Collective
If we really believed what scientists are telling us about global warming, the fire engines of every fire department would sound their sirens and race to the nearest factory to extinguish its furnaces. Every high school student would run to the thermostat of every classroom, turn it off, and tear it out of the wall, then hit the parking lot to slash tires. Every responsible suburban parent would don safety gloves and walk around the block pulling the electrical meters out of the utility boxes behind houses and condominiums. Every gas station attendant would press the emergency button to shut off the pumps, cut the hoses, and glue the locks on the doors; every coal and petroleum corporation would immediately set about burying their unused product where it came from—using only the muscles of their own arms, of course.
But we’re too out of touch to grasp what’s happening, let alone put a stop to it.
Those who learn about the destruction of the environment from books or the internet can’t hope to rescue anything. The decimation of the natural world has been going on around us for centuries now; it takes a particularly bourgeois brand of blindness to drive by felled trees, spewing smokestacks, and acres of asphalt every day without noticing that anything is happening until it shows up in the newspaper. People for whom reality is composed of news articles, rather than the world they see and hear and smell, are bound to destroy everything they touch. That alienation is the root of the problem; the devastation of the environment simply follows from it.
When profit margins are more real than living things, when weather patterns are more real than refugees fleeing hurricanes, when emissions cap agreements are more real than new developments in our own neighborhoods, the world has already been signed over for destruction. The climate crisis isn’t an event that might happen, looming into view ahead; it is the familiar setting of our daily lives. Deforestation isn’t just taking place in national forests or foreign jungles; it is as real at every strip mall in Ohio as it is in the heart of the Amazon. The buffalo used to roam right here. Our disconnection from the land is catastrophic whether or not the sea level is rising, whether or not the desertification and famine sweeping other continents have reached us yet.
As usual, the people who brought this crisis upon us are eager to explain that they are the best qualified to remedy it. But there’s no reason to believe that their motives or methods have changed. The results are in that smoking causes cancer, but they’re still trying to sell us low-tar cigarettes.
Forget about nuclear power, solar power, clean coal, and wind turbines. Forget about carbon trading, biofuels, recycling programs, organic superfoods. Forget about new legislation, along with every other inefficient, insufficient response involving ballots, petitions, or some other proxy. Our only hope is to fight with our own hands, to take a stand on the ground beneath our feet—rediscovering in the process what it means to be a part of the world, not separate from it. Every tree they try to cut down, we can stop them. Every poison they try to release into the atmosphere, we can block them. Every new “sustainable” technology they introduce, we can unmask them.
They aren’t going to stop destroying the planet until we make it too costly for them to continue. The sooner we do, the better.

The Corporate Solution
Where others see hardship and tragedy, entrepreneurs see an opportunity for financial gain. Putting the “green” in greenhouse gases and the “eco” in economy, they greet the apocalypse with outstretched wallets. Are natural disasters wrecking communities? That’s great—sell the survivors disaster relief and put up luxury condominiums where they used to live. Are food supplies contaminated with toxins? Slap “organic” on some of them and jack up the price—presto, what was once taken for granted in every vegetable is suddenly a selling point! Is consumer culture devouring the planet? Time for a line of environmentally friendly products, cashing in on guilt and good intentions to move more units.
So long as being “sustainable” is a privilege reserved for the rich, the crisis can only intensify. All the better for those banking on it.
The Conservative Solution
Many conservatives deny that our society is causing global warming; of course, some still don’t believe in evolution, either. But what they themselves believe is immaterial; they’re more concerned with the question of what it is profitable for others to believe. For example, when the UN’s Intergovernmental Panel on Climate Change released its 2007 report, an ExxonMobil-funded think tank linked to the Bush administration offered $10,000+ to any scientist who would dispute its findings.
That is to say—some people consider it a better investment to bribe experts to deny that anything is happening than to take any steps to avert catastrophe. Better that the apocalypse snatches us unawares so long as they can maintain their profits one more year. Sooner the end of life on earth than the possibility of life beyond capitalism!
The Liberal Solution
Certain do-gooders would like to claim credit for bringing global warming to the attention of the public, even though radicals have been clamoring about it for decades. But politicians like Al Gore are not trying to save the environment so much as to rescue the causes of its destruction. They are pressing for government and corporate recognition of the crisis because ecological collapse could destabilize capitalism if it catches them off guard. Small wonder corporate initiatives and incentives figure so prominently in the solutions they propose.
Like their conservative colleagues, liberals would sooner risk extinction than consider abandoning industrial capitalism. They’re simply too invested in it to do otherwise—witness the Gore family’s long-running relationship with Occidental Petroleum. In this light, their bid to seize the reins of the environmentalist movement looks suspiciously like a calculated effort to prevent a more realistic response to the crisis.
The Malthusian Solution
Some people attribute the crisis to overpopulation—but how many shantytown dwellers and subsistence farmers do you have to add up to equal the ecological impact of a single high-powered executive?
The Socialist Solution
For centuries, socialists have promised to grant everyone access to middle class standards of living. Now it turns out that the biosphere can’t support even a small minority pursuing that lifestyle; one might expect socialists to adjust their notion of utopia accordingly. Instead they’ve simply updated it to match the latest in bourgeois fashions: today every worker deserves to eat organic produce and live in a “green” condominium. But these products only came to be as a marketing ploy to differentiate high-end merchandise from proletarian standard fare. If you’re going to think big enough to imagine a society without class differences, you might as well aim for a future in which we share the wealth of a vibrant natural world rather than chopping it up into inert commodities.
The Communist Solution
In practice, Marxism, Leninism, and Maoism served as a convenient means to swiftly jerk “underdeveloped” nations into the industrial age, utilizing state intervention to “modernize” peoples who still retained a connection to the land before eventually dropping them unceremoniously at the margin of the free market. Today, party communists have gotten no further than blithe assurances that new management would take care of everything. Sing along to the tune of “Solidarity Forever”:If the workers owned the factories, climate change would not existAll the smoke from all the smokestacks would be changed to harmless mist . . .
The Individual Solution
An individual or community can live a completely “sustainable” lifestyle without doing anything to hinder the corporations and governments responsible for the vast majority of environmental devastation. Keeping one’s hands clean—“setting an example” that no statesman or tycoon will emulate—is meaningless while others lay the planet to waste. To set a better example, stop them.
The Radical Solution
Too many radicals respond to the crisis with despair or even a kind of wrongheaded anticipation. There’s no reason to believe the exhaustion of the planets petroleum supply will put an end to patriarchy or white supremacy. Likewise, it’s all too likely that hierarchy can make it through ecological collapse intact, so long as there are people left to dominate and obey.
We’ll get out of the apocalypse what we put into it: we can’t expect it to produce a more liberated society unless we put the foundations in place now. Forget about individualistic survival schemes that cast you as the Last Person on Earth—Hurricane Katrina showed that when the storm hits, the most important thing is to be part of a community that can defend itself. The coming upheavals may indeed offer a chance for fundamental social change, but we have to come up with a compelling vision and the guts to implement it.
Another End of the World Is Possible!

http://crimethinc.com/texts/recentfeatures/climate.php
the photos from Copenhagen appeared in the interesting article
of Der Spiegel: “Climate Talks in Copenhagen
Riots Outside, Chaos Inside”:
http://www.spiegel.de/international/world/0,1518,667141,00.html
Tags: Climate Changecop15