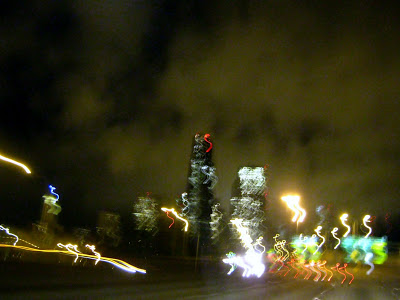 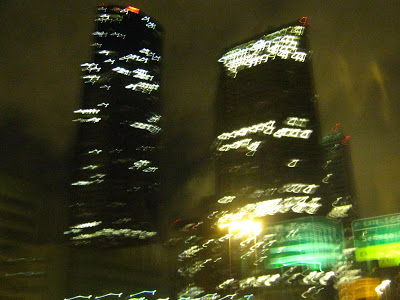 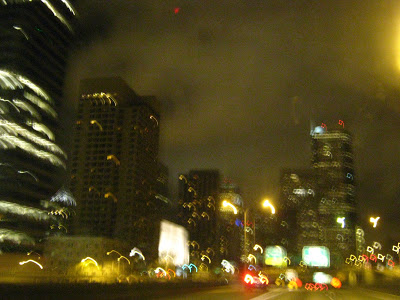 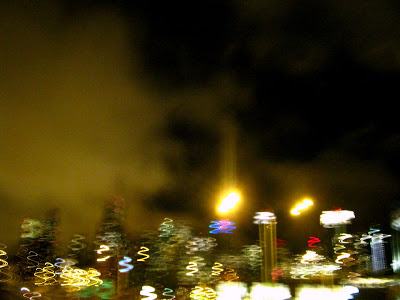 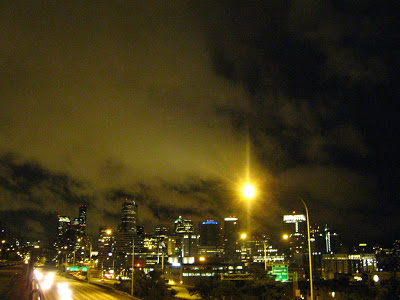 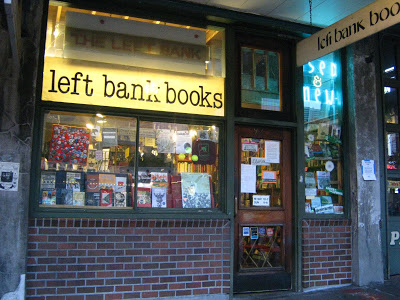 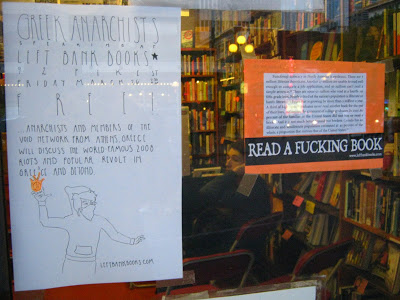 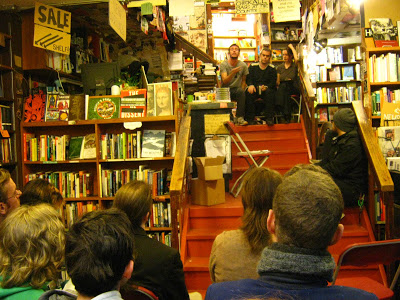 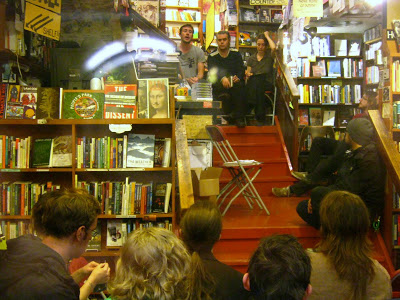 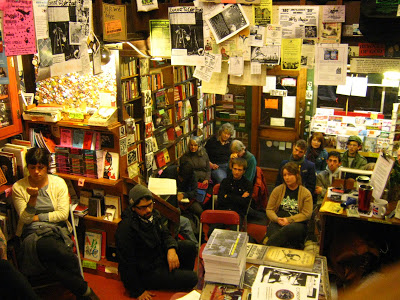 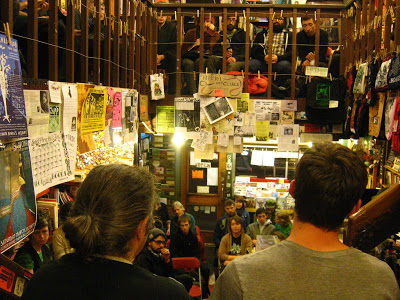 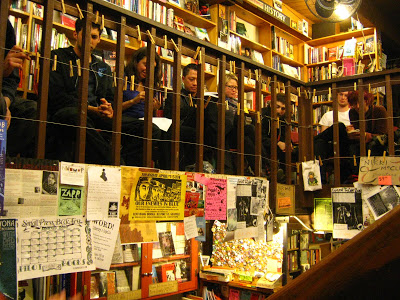 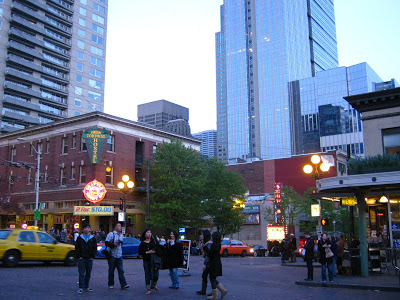 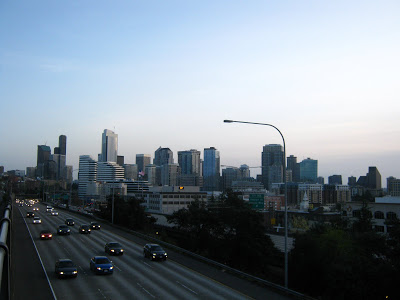 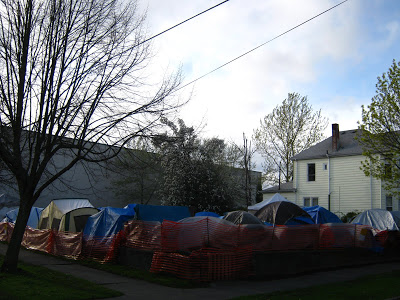 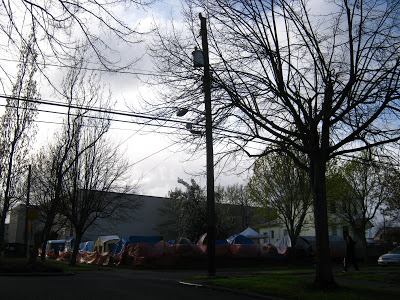 The Bookshop Left Bank that organized our talk in Seattle has been a fixture of Seattle’s radical community since 1973 when a group of people split off from the University District’s Red and Black Books to form their own collective bookstore in the Pike Place Market. Left Bank is collectively owned and operated by its workers, and has been since its inception. As an anarchist collective, Left Bank has no bosses or managers. Decisions are made in bi-monthly collective meetings based on a consensus process. Despite all the changes over the years, Left Bank Books continues to thrive at our Pike Place Market storefront.
http://www.leftbankbooks.com
We had the lack to meet many different people that came to Left Bank for our talk,… people from many different ages and many political groups, collectives and cultural backgrounds.
Many interesting projects and social struggles are taking place in Seattle and we hope in the next years they will achieve highest possible  visibility and influence to the local society
Los Quixote’s infoshop and grand lending anarchist library: [http://losquixotesinfoshop.wordpress.com/]
An important group in Seattle is Illvox, a part of Anarchist / Autonomous/ Antiauthoritarian People of Color [http://illvox.org/] :illvox is dedicated to relating people of color-led political struggles, especially from an anti-authoritarian point of view, to a broad audience.
illvox also exists to provide historical documents as well as host newer thinking and support discussion about the issues raised by people of color in relation to essential matters in these movements.
illvox exists to agitate in support of the Anarchist People of Color tendency and its efforts. However, illvox is not APOC; APOC is a movement, not an organization or collective, whose tenets are briefly described on our Join the Movement page.
illvox emerged in June 2007. It is manifested and maintained by a small collective of people of color.
North West anarchist / Autonomous People of Color Manifesto:
Revolutionary Principles of Unity
1. We call for a social revolution to erect an entire new society.
2. We want decent housing, food, clothing and other essentials for all, not just the rich.
3. We oppose all forms of colonialism and imperialism in the Third and Fourth Worlds and support the struggles of all oppressed peoples in the West.
4. We oppose nation-state wars and the building of a fascist police state based on hysteria over “terrorism.”
5. We oppose any form of white supremacy, white cultural chauvinism, whiteness or internalized racism in the Anarchist movement, and call for unity and recognition of our right to autonomy.

6. We strive and fight to dismantle, deconstruct and unlearn (in no particular order but all at once) white supremacy, patriarchy, ableism, heterosexism, speciesism,
transphobia, queerphobia, environmental racism, ageism, classism, authoritarianism, the State and all forms of oppression.
7. We oppose the oppression of wimmin/women, queers, transfolk, two spirit people, youth, genderqueers, differently able-bodied people, people with mental health complexities, animals and all that are oppressed.
8. We oppose any forms of capitalism and class oppression and support the liberation of the poor and the workers.
9. We call for an immediate moratorium of the death penalty and the dismantling of the prison industrial complex.
10. We demand an immediate end to all violence against all wimmin/women (sexual, domestic or otherwise). We fully support survivors’ (of sexual assault and rape) autonomy. We demand all perpetrators adhere and cooperate to the fullest extent the procedures and demands of the survivors and the communities.
Other groups are also the Revolutionary Autonomous Communities [http://revolutionaryautonomouscommunities.blogspot.com/] and the Seattle Solidarity Network [ www.seasol.net ].
In the last day of our staying in Seattle we visited a tent city, a camp of homeless people that started to exists during the recent economic crisis in U.S.A. and had to move in 11 different places after police attacks in the last 2 years… We did an interview video of one of the activists that defending the tent city and we will upload it soon in Void Network Channel
Day after day in our tour the map of groups and meetings and co-ordination of action and theory all over amerikkka expands and we meet some amazing new friends from collectives that we feel very soon will change the directions of the underground movement in U.S.A.
Tags: Seattle Appoc Left Bank bookshop