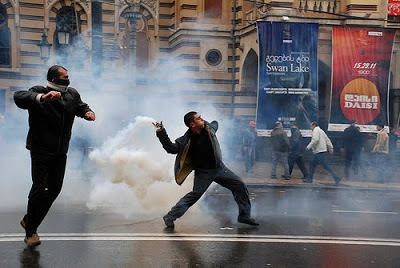 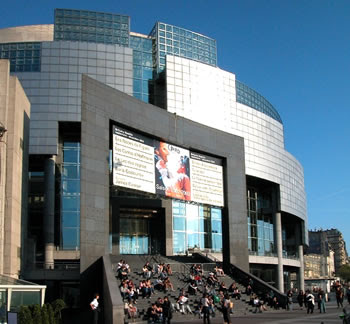 Here attached and pasted is a communique from
comrades in Paris translated into english by
american writer Calamity Barucha.

Please forward this widely, post onto
your blogs ect . We are trying to get this out there
because there haven’t been many communqies
until now and hopefully people will
organize some soli-demos.
This same group who wrote this will soon
come out with another
communique that will be broader, consolidating
more info and having a bigger anylisis and
comrades will translate it….
But for now this is all we have so help us
get it out there.
-sleepless in europe,
Void Network

The following is a communiqué that appeared

on Paris Indymedia, written by comrades who breifly
occupied the Opera in Bastille, Paris on Satruday.
Since the appearance of this communique,
mainstream media reports rising violent resistance
across France on Tuesday, as once again up to three million people took to the
streets and riots occurred from Lyon to the Paris
suburbs. As the Guardian reports, the strikes have “appeared to be pushing France closer
to crisis today as fuel shortages were felt across the
country and violence erupted on the sidelines of protests by children.”
According to media, if fuel is not made available
to cargo trucks in the next few days (due to blockades and strikes), the economy could become
paralyzed when factories and workplaces
run out of supplies.
Translated from French:

The state and the bosses only understand one language
Monday, October 18th, 2010

During the last days numerous initiatives have begun to flourish
everywhere: secondary schools, train stations, refineries and
highwayshave been blockaded, there have been occupations
of public buildings,workplaces, commercial centers,
directed cuts of electricity, and ransacking of electoral
institutions and town halls…In each city, these actions are
intensifying the power struggle and demonstrate that many
are no longer satisfied with the forms of
actions and words of order imposed by the union
leaderships.
In the Paris region, amongst the blockades of train stations
and secondary schools, the strikes in the primary schools,
the  workers pickets in front of the factories, people create
inter-professional meetings and collectives of struggle
are founded to destroy categorical isolation and separation.
Their starting point:
self-organization to meet the need to take ownership over our
struggles without the mediation of those who claim to speak for
workers. Many of us do not organize ourselves according to the
traditional forms of strikes on work sites, yet provided, we still
find a desire to contribute to the general movement in economic
blockade.

Thus, we find this movement as also an opportunity to go beyond the single issue of pensions, the question of work, in order to
develop and build together a critique of exploitation.

Starting from these questions we decided Saturday to occupy the Opera Bastille. This was to disturb a presentation that was live on radio, to play the trouble makers in a place where the cultural merchandise circulates and to organize an assembly there. So we met with more than a thousand people at the “place de la nation”, with banners stating “the bosses understand only one language: Strike, blockade, sabotage”
and “against exploitation: block the economy”, with the desire to go beyond the strictly limited framework of the union’s demonstration. We reassembled at the end of the demonstration in the contrary sense and arrived at the place of action, finally finding ourselves in a free demonstration situation surrounded by an impressive police force. Very
quickly more than a hundred police officers in civil dress, helped by the syndicalists service, ordered to split the demo in two and prevented a certain number of people from joining in.

With eggs and fireworks we pushed away the cops as far as possible from our demo, and we left “accidentally” some traces along our way. Note in passing to those who find nothing better to do than speculate on undercover officers from images stolen by journa-cops, there is no question of crying over two windows of banks whose attack is merely a weak response to the violence of capital.
Upon arrival at the Bastille, due police repression and confusion, only about fifty people were able to finally enter the opera while others chose to disperse.
The cops deployed in the square were able to arrest some forty people who were taken into custody in several police stations. Monday night, most were released, but at least 5 others remain in custody and go before the judge this would be Tuesday…they are charged with “armed assembly” and “destruction of goods by an organized gang”. As always, the powers decided to strike fast and hard, hoping to accentuate or create separations (between reasonable sydicalists unionists and simple shop-owners, between students and rioters …) in order to smash everything that contributes to the
emergence of a genuine power relation against the state and the bosses. Police used “flashbang” grenades and rubber bullets against overly energetic high school students; the refinery workers suffer not only attacks from the police but also direct threats by the “prefect” to pursue them, and of requisition; the pissed off demonstrators who
decided not to just calmly disperse risk prison as in St. Nazaire.
Since the beginning of the movement over a thousand people have been arrested.

The multiplication of initiatives that escape the traditional
gravediggers of struggles belies clear to all those who would like to isolate the black sheep and prevent protesting that which is largely accepted, beyond the numbers of years of contribution. These actions allow us to glimpse the possibility of a movement where the corporatist struggles are left behind, where the bureaucrats loose foot, where struggles are not limited to what is allegedly acquired.

There is way more to take than they want us to believe!

Stop the pursuits. Freedom for everyone…

Text by:NEWS WIRES France on Saturday detained 21 African migrants who surged into the Pantheon in