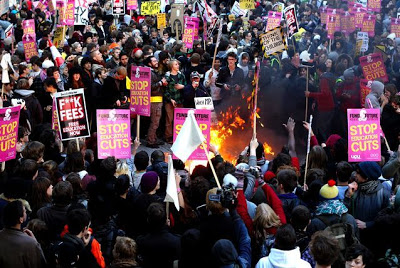 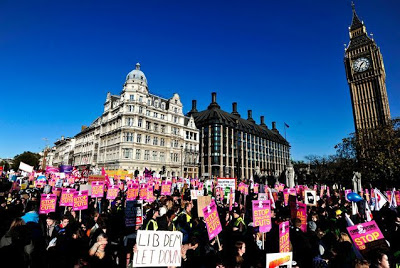 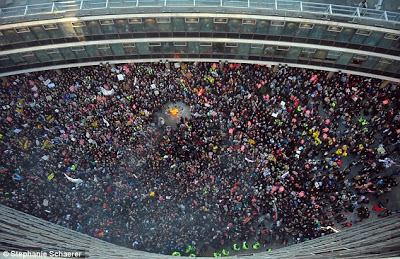 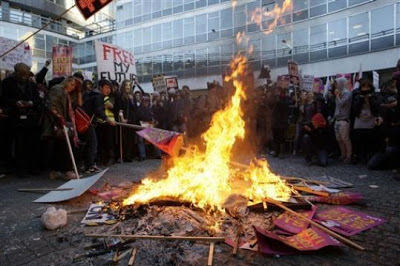 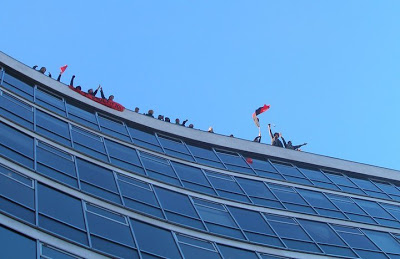 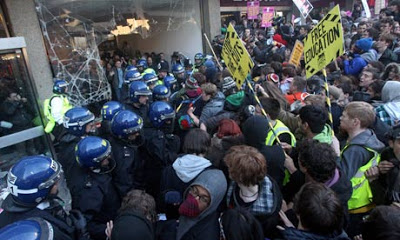 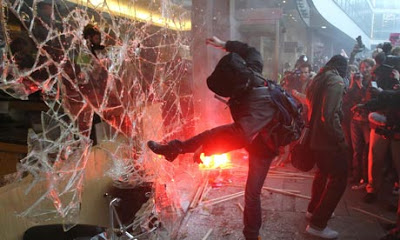 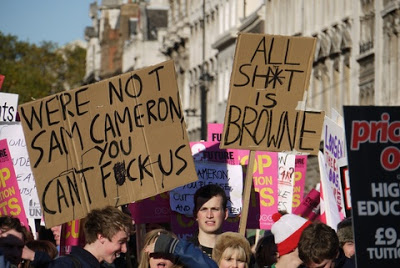 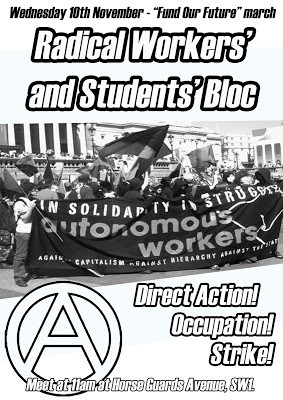 about the student struggle in

U.K. and Ireland, a struggle

creates hopes to all of

the arising of critical thought and fearless action

and social, economical and

We express our solidarity

to all students and workers

that participated in the

attacks against targets of

authority and control in

London and all over U.K.

Your Fight is our Fight!

‘This is just the beginning’

Tens of thousands of students took to the streets of London today in a demonstration that spiralled out of control when a fringe group of protesters hurled missiles at police and occupied the building housing Conservative party headquarters.
Tonight both ministers and protesters acknowledged that the demonstration – by far the largest and most dramatic yet in response to the government’s austerity measures – was “just the beginning” of public anger over cuts. Police, meanwhile, were criticised for failing to anticipate the scale of the disorder.
An estimated 52,000 people, according to the National Union of Students, marched through central London to display their anger over government plans to increase tuition fees while cutting state funding for university teaching. A wing of the protest turned violent as around 200 people stormed 30 Millbank, the central London building that is home to Tory HQ, where police wielding batons clashed with a crowd hurling placard sticks, eggs and some bottles. Demonstrators shattered windows and waved anarchist flags from the roof of the building, while masked activists traded punches with police to chants of “Tory scum”.
Police conceded that they had failed to anticipate the level of violence from protesters who trashed the lobby of the Millbank building. Missiles including a fire extinguisher were thrown from the roof and clashes saw 14 people – a mix of officers and protesters – taken to hospital and 35 arrests. Sir Paul Stephenson, Met police commissioner, said the force should have anticipated the level ofviolence better. He said: “It’s not acceptable. It’s an embarrassment for London and for us.”
While Tory headquarters suffered the brunt of the violence, Liberal Democrat headquarters in nearby Cowley Street were not targeted. “This is not what we pay the Met commissioner to do,” one senior Conservative told the Guardian. “It looks like they put heavy security around Lib Dem HQ but completely forgot about our party HQ.”
Lady Warsi, the Tory party chair, was in her office when protesters broke in. She initially had no police protection as the protesters made their way up the fire stairs to the roof. Police who eventually made it to Tory HQ decided not to evacuate staff from the building but to concentrate on removing the demonstrators.
The NUS president, Aaron Porter, condemned the actions of “a minority of idiots” but hailed the turnout as the biggest student demonstration in generations. The largely good-natured protest was organised by the NUS and the lecturers’ union the UCU, who have attacked coalition plans to raise tuition fees as high as £9,000 while making 40% cuts to university teaching budgets. The higher fees will be introduced for undergraduates starting in 2012, if the proposals are sanctioned by the Commons in a vote due before Christmas. The NUS president told protesters: “We’re in the fight of our lives. We face an unprecedented attack on our future before it has even begun. They’re proposing barbaric cuts that would brutalise our colleges and universities.”
Inside parliament the deputy prime minister, Nick Clegg – the focus of much anger among protesters for his now abandoned pledge to scrap all tuition fees – came under sustained attack, facing 10 questions on tuition fees during his stand-in performance during prime minister’s questions. He said there was consensus across the parties about the need to reform the system.
Labour’s deputy leader, Harriet Harman, said the rise in fees was not part of the effort to tackle the deficit but about Clegg “going along with Tory plans to shove the cost of higher education on to students and their families”. She said: “We all know what it’s like: you are at freshers’ week, you meet up with a dodgy bloke and you do things that you regret. Isn’t it true he has been led astray by the Tories, isn’t that the truth of it?”
Meanwhile one student won an unexpected concession from the coalition yesterday. In answer to a question from a Chinese student during his trip to China, David Cameron said: “Raising tuition fees will do two things. It will make sure our universities are well funded and we won’t go on increasing so fast the fees for overseas students … We have done the difficult thing. We have put up contributions for British students. Yes, foreign students will still pay a significant amount of money, but we should now be able to keep that growth under control.”
Additional reporting by Rachel Williams and Matthew Taylor
original article published here:
http://www.guardian.co.uk/education/2010/nov/10/student-fees-protest-conservative-hq

Student protest:
we are all in this together


The Occupation of Conservative Party HQ is about so much more
than fees. At last the country is starting to fight back


Today’s protest against the education cuts was uplifting: students, staff and others from all over the country gathered in their thousands to walk the route between Embankment and Tate Britain, pausing to boo at Downing Street. The weather was bright and clear, and the mood decidedly upbeat. Staff, students and others marched together under banners from colleges all over the country, while drums and chants protesting at the fees rang out for miles. There were a sizable number of Lib Dems protesting against their own party’s U-turn on fees, and a sit-in outside parliament – the peace protesters who reside there were happy to give the students a quick lesson in the true meaning of anarchy.
Numbers were massive too, with around 52,000 turning out – more than double the NUS’s original estimate. Police helicopters circled above the crowds, as protesters carried giant vultures, carrots, coffins and effigies of Tory politicians. But media reports will inevitably focus on one thing, namely the spontaneous occupation of and protest in Tory HQ at 30 Millbank Tower. Aaron Porter, the NUS president, was quick to condemn the breakaway protesters, describing their actions as “despicable”.
As I write, about 200 people have occupied the building, and bonfires burn outside. Some arrests have been made and eight people – protesters and police officers – have been injured. Protesters have broken windows and made their way on to the roof. Twitter reports indicate that some have taken a sofa from inside Millbank and put it outside, with the quite reasonable argument that “if we’re going to bekettled we may as well be comfy”.
Direct action this most certainly was, the kind writers such as John Pilgerhave recently been calling for. It is hard to see the violence as simply the wilfulness of a small minority – it is a genuine expression of frustration against the few who seem determined to make the future a miserable, small-minded and debt-filled place for the many.
The protest as a whole was extremely important, not just because of the large numbers it attracted, and shouldn’t be understood simply in economic terms as a complaint against fees. It also represented the serious anger many feel about cuts to universities as they currently stand, and the ideological devastation of the education system if the coalition gets its way. It was a protest against the narrowing of horizons; a protest against Lib Dem hypocrisy; a protest against the increasingly utilitarian approach to human life that sees degrees as nothing but “investments” by individuals, and denies any link between education and the broader social good.
The protesters – students and others – who occupied Tory HQ will no doubt continue to be condemned in the days to come. But their anger is justified: the coalition government is ruining Britain for reasons of ideological perversity. The protests in France and Greece and the student occupations here, such as the recent takeover of Deptford Town Hall by Goldsmiths students on the day cuts were announced, are indicators of a new militancy. At this point, what have we got to lose?
The best moments on any protests are when there is a real feeling of common purpose and a recognition that we are all on the same side. This is the true meaning of “big society” – the very thing that the coalition seems set on destroying, despite its rhetoric. This protest – in both its peaceful and more violent dimensions – is a sign of a country unafraid to fight back, for the first time in a long time.
This article published originaly here:
http://www.guardian.co.uk/commentisfree/2010/nov/10/student-protests-conservative-party-hq-occupation

for more photos and videos:
http://athens.indymedia.org/front.php3?lang=el&article_id=1223725

More than 40.000 people protest against the three-day visit of US President Donald Trump to the