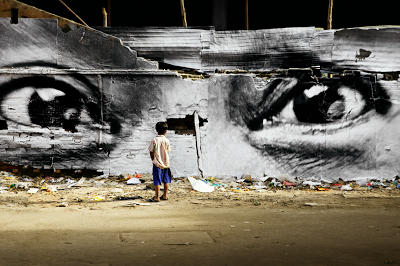 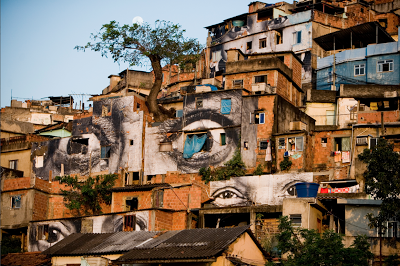 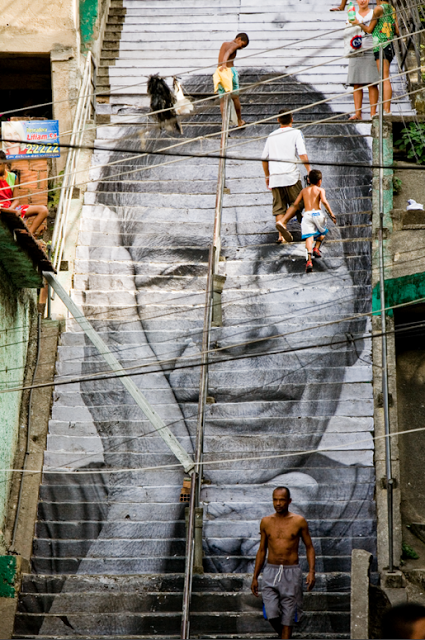 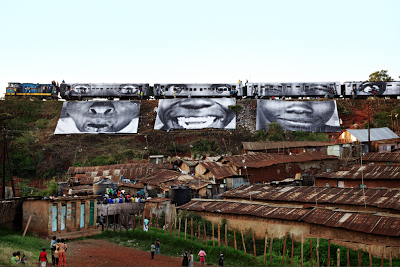 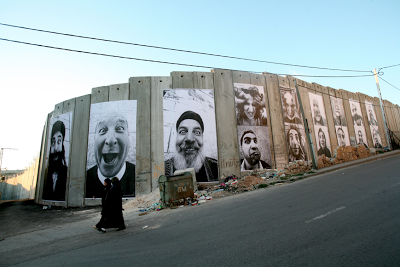 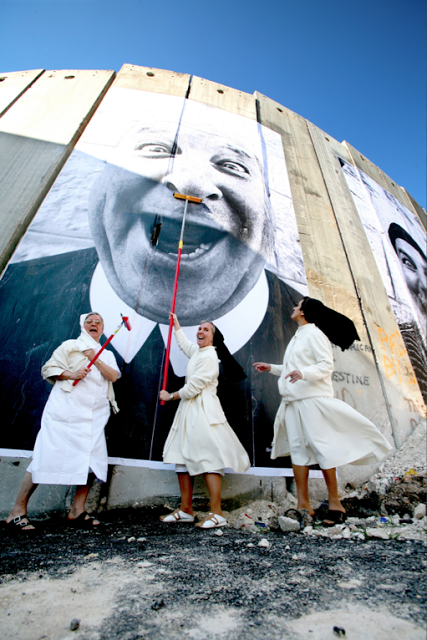 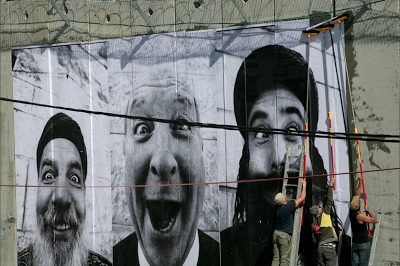 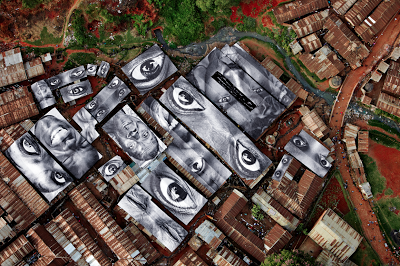 JR exhibits his photographs in the biggest art gallery on the planet. His work is presented freely in the streets of the world, catching the attention of people who are not museum visitors. His work mixes Art and Action; it talks about commitment, freedom, identity and limit.
JR’s career as a photographer began when he found a camera in the Paris subway. In his first major project, in 2001 and 2002, JR toured and photographed street art around Europe, tracking the people who communicate their messages to the world on walls. His first large-format postings began appearing on walls in Paris and Rome in 2003. His first book, Carnet de rue par JR, about street artists, appeared in 2005.

In 2006, he launched “Portrait of a Generation,” huge-format portraits of suburban “thugs” from Paris’ notorious banlieues, posted on the walls of the bourgeois districts of Paris. This illegal project became official when Paris City Hall wrapped its own building in JR’s photos.
In 2007, with business partner Marco, he did “Face 2 Face,” which some consider the biggest illegal photo exhibition ever. JR and a grassroots team of community members posted huge portraits of Israelis and Palestinians face to face in eight Palestinian and Israeli cities, and on both sides of the security fence/separation barrier.
He embarked on a long international trip in 2008 for his exhibition “Women Are Heroes,” a project underlining the dignity of women who are the target of conflict. In 2010, the film Women Are Heroeswas presented at the Cannes Film Festival and received a long standing ovation.
JR is currently working on two projects: “Wrinkles of the City,” which questions the memory of a city and its inhabitants; and Unframed, which reinterprets famous photographs and photographers by taking photos from museum archives and exposing them to the world as huge-format photos on the walls of cities. It asks the question: What is the art piece then? The original photo, the photo “unframed” by JR or both?
JR creates pervasive art that spreads uninvited on buildings of Parisian slums, on walls in the Middle East, on broken bridges in Africa or in favelas in Brazil. People in the exhibit communities, those who often live with the bare minimum, discover something absolutely unnecessary but utterly wonderful. And they don’t just see it, they make it. Elderly women become models for a day; kids turn into artists for a week. In this art scene, there is no stage to separate the actors from the spectators.
After these local exhibitions, two important things happen: The images are transported to London, New York, Berlin or Amsterdam where new people interpret them in the light of their own personal experience. And ongoing art and craft workshops in the originating community continue the work of celebrating everyone who lives there.
As he is anonymous and doesn’t explain his huge full-frame portraits of people making faces, JR leaves the space empty for an encounter between the subject/protagonist and the passerby/ interpreter.
This is what JR is working on: raising questions…
Portrait of JR photo credit: © Christopher Shay
All other photos credit: © jr-art.net
article written by :
http://www.tedprize.org/congratulations-to-the-2011-ted-prize-winner-jr/


we invite you to see this interesting video about the life and
street art actions of JR: