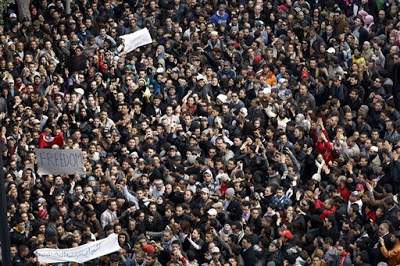 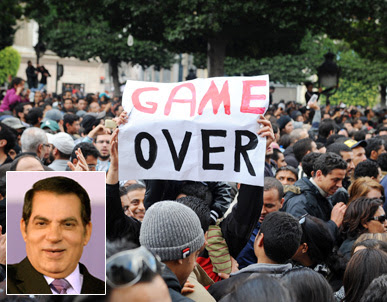 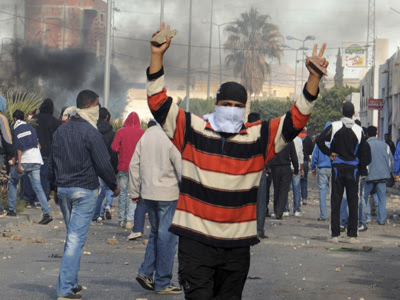 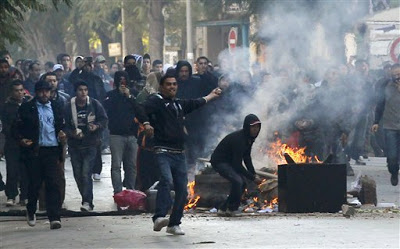 intro about the revolt in Tunisia
by Workers Solidarity Movement:
Friday 14 January 2011 — After a dramatic 24 hours when Tunisia’s dictator president Ben Ali first tried promising liberalisation and an end to police shootings of demonstrators and then, this evening at 16:00, declaring martial law, he has finally fallen from office. While the rumours are still swirling, one thing is clear, Ben Ali has left Tunisia and the army has stepped in.
The day began with a mass demonstration called by Tunisia’s trade union federation, the UGTT, in the capital Tunis. Between 10 and 15,000 people demonstrated outside the Ministry of the Interior. The initially peaceful scene broke down at around 14:30 local time as police moved in with tear gas and batons to disperse the crowd, some of whom had managed to scale the Ministry building and get on its roof. From then on, the city centre descended into chaos with running battles between the riot police and Tunisians of all ages and backgrounds fighting for the overthrow of the hated despot.
Finally, armoured cars from the army appeared on the street and a state of emergency and curfew was declared with Ben Ali threatening the populace that the security forces had carte blanche to open fire on any gatherings of more than three people. Soon, however, he disappeared from view and the rumours began to circulate. The army seized control of the airport and there were reports of convoys of limousines racing to the airport from the Ben Ali families palace. Finally the official announcement came. Ben Ali is gone. Prime Minister Mohammed Ghannouchi appeared on state TV to announce that he was in charge of a caretaker government backed by the army.
Tonight the long-suffering people of Tunisia may rejoice that their last four weeks of heroic resistance has finally seen off the dictator who ran the most vicious police state in North Africa over them for the last 23 years.
But tomorrow morning will find the army in charge. What will happen tomorrow and the days to follow is anybody’s guess. But the people now know that they have the power to overthrow a long-entrenched dictatorship, how much easier to take on a new unstable regime.
Report by Workers Solidarity Movement
find more info, videos and reports here:
http://libcom.org/news/protests-spread-tunisia-12012011 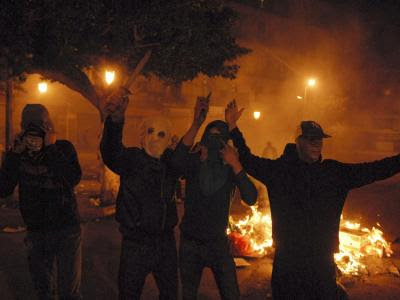 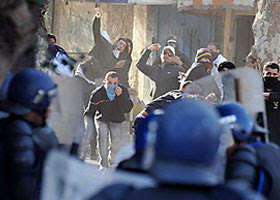 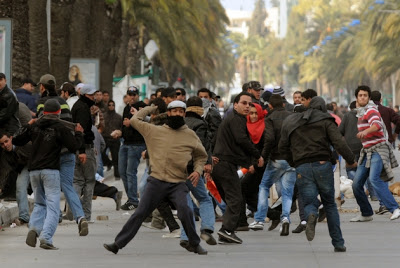 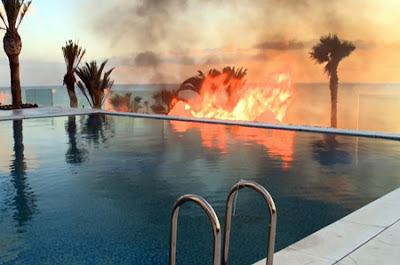 A statement by Embat, a Libertarian Organization from Catalonia, on the Pablo Hasél case and the authoritarian