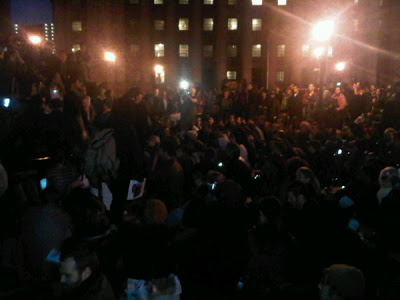 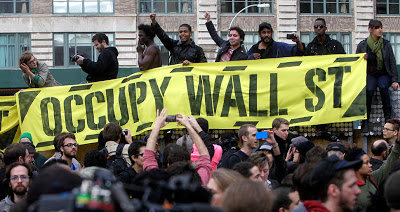 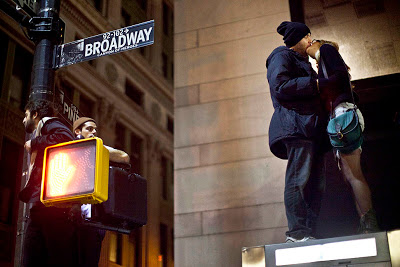 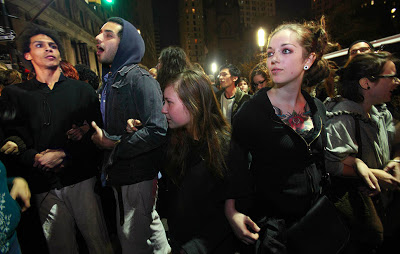 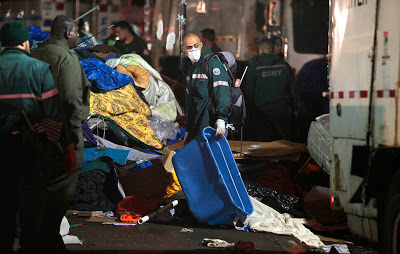 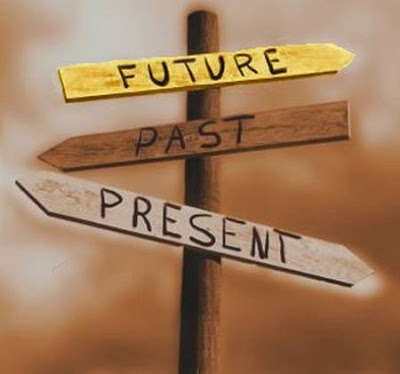 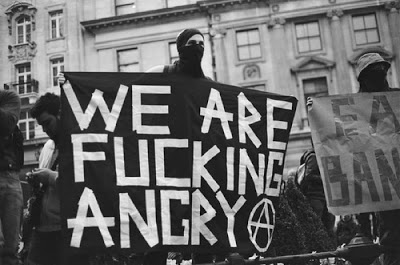 After the raid on Zuccotti Park early this morning [ http://www.nycga.net/ ], what remains of Occupy Wall Street? The library was destroyed and thrown in the garbage; the kitchen and commune that fed and housed hundreds now gone. But what about the general assembly?

This is not some terrible, reactionary deconstruction of the importance of consensus, discussion, and the camaraderie of equals; I merely mean to pinpoint tactics of affinity that force platforms of sharing and leveling to occur in the first place. As Rosa Luxemburg [ http://www.marxists.org/archive/luxemburg/1918/russian-revolution/ch06.htm ] said,“freedom is always and exclusively freedom for the one who thinks differently” – to not discuss this, and bring it forthwith, is to say only endless opinions matter.

Why should mere “opinions” be interesting? Why should anything like Occupy Wall Street be supposed to be a monolith of practices and ideas? Even if it were, why should it continue as it is? The power of Occupy Wall Street is in its multiplicity of democratic forms, not endless rote assemblies. The recent raids on Oakland, Portland and New York (most likely coordinated) are forcing Occupy Wall Street to radicalize its formations – autonomous affinities are necessary to propel the “movement,” but in order to do this, they cannot be wholly identified with it.

At 5PM on Saturday, October 22, a group of activists, artists and others occupied Artists Space [ http://www.nytimes.com/2011/10/25/nyregion/occupy-wall-street-splinter-group-occupies-art-gallery.html ], a project of the New York State Council on the Arts which had the goal of assisting young and emerging artists. Deemed “Occupy 38” (for 38 Greene Street, Soho), over the course of the next 28 hours they drew dismissive comments, if not outright venom, from every would-be analyst of Occupy Wall Street. Village Voice feigned confusion. Anonymous decried it with “this ‘occupation’ sucks !!!” On Twitter, the hashtag #occupy38 was bizarrely filled with vitriol against the action, with numerous New York bloggers and journalists claiming understanding and sympathy with Occupy Wall Street at Zuccotti Park and the movement as a whole, but eager to denounce “Take Artists Space” as “immature” and “stupid.” Despite holding open general assemblies, Occupy 38 was quickly construed as “elitist.” Though they did not try to promote exclusivity, it is true that their goal was to circumvent the General Assembly – with its undercover cops, wet blanket liberals, and bleating obsessions with process – in order to advance the movement.

Trees for the Forest

Of course, those behind Take Artists Space were well aware of their actions – the committees and process of Zuccotti were becoming overwrought and stifling, and it was a necessity to take indoor space, especially before the cold weather began, to renew the radicality of OWS’s initial gestures. In other words, to continue a serial composition of what occupation is, not defensively and hysterically crying out “quid juris?” [ http://conservapedia.com/Questio_quid_juris ]
Occupying a more community-oriented art gallery was a calculation to avoid an immediate crackdown – Artists Space failed in this regard, eventually snitching on the occupiers, because by all anecdotal reports, they were, in summary, mean.

Why does any of this matter? The obvious response was included on the Take Artists Space tumblr [ http://artistsspaceoccupation.tumblr.com/ ]. They found themselves “amidst accusations of moral deficiency and political immaturity, the same accusations wielded by the owners of Zuccotti Park at the start of its occupation.” But this critique was unfortunately lost on the liberals of the blogosphere.

The liberals felt that Take Artists Space drew attention away from the main struggle of Occupy Wall Street and its Zuccotti Park origin story, implying that if the talisman of that place were to be taken away, the “movement” would somehow cease to grow. As though the power of the general assemblies were in their unity, and not their multiple elements! The occupations symbolically uphold their occupied spaces, but any aberration is deemed “poorly organized” adventurism by people who insist on symbols alone. The “friendly,” “radical” media relished in calling out the perceived turpitude and audacity of Take Artists Space, and effectively did the work of the police’s PR department.

But never mind that. Given the real arc of affairs supplying the backdrop to the drama that is OWS – the breakdown of global capitalism as a world system – why not support emancipatory revolt in all its forms? Given the very realistic long-term consequences of today’s events, why stunt the transformative potential of everything that emerges from capitalism’s structural contradictions?

The mistake today is to look at Greece, Spain, London, Chile, and elsewhere, and hold them in relief as parts of a whole, a single phenomenon. Actually, this is what a single phenemenon looks like as it is being ripped apart. We should participate in its coming apart – it’s not as if we could do anything to prevent it! Are there some people – even those who claim support for Occupy Wall Street – who still believe a return to the status quo is possible, but with maybe a little more democracy and jobs thrown in?

The general assemblies, while exciting and resonant, are not sacred cows. The general assemblies sustain a refusal of today’s dismal situation not only inasmuch they do just that – sustain the refusal. They must meet at the intersection of revolutionary sequence and insurrectionary act: where they are a process, they should also be an act of transgression, and where they are transgressive, they should also move toward a real goal. When they are neither, they should be scrapped for something else. They do not represent anyone, and do not speak for the movement, strictly because there is not a movement, but thousands of movements, in full floral bloom.

Still Not Getting It

Simply put, there isn’t any stopping what is under way – what is important is to foster the creation of groups, agitate and educate in and out of the workplace, and splinter whatever unity the present possesses into many other factions and affinities. Forcing encounters – those moments when business does not go as usual – is the prerogative for new assemblies and methods. Global capital preserves a situation in which there are no encounters, because business must always go as planned, and nothing exists but business. Take Artists Space was an attempt at creating an encounter – to draw out the consequences of haste and audacity, and adhering not to schisms in general, but to generating schism and playing it out until the music stops. If experimentation rubs people the wrong way when its happening, this is the symptom that something new is occurring.

We battle with saboteurs, camouflaged socialists, intellectual skepticism; and we say: Let’s occupy something else. Now we know who we can invite. The ones that don’t wish only for progress to our movement, but the efforts of our bodies to expose and threaten, to break structures and clichés which are not bound only in the arena of a bureaucratic village. In this process we are educated about tactics of friend and enemy.

It is Pollyannaish to continue to assume that everyone will be Occupy Wall Street’s friend, just as it is obtuse to believe there are enemies around every corner. We must continue to discover who our friends really are.

The first sequence of the Occupy movement, as events in Oakland and Chapel Hill attest, is over. On Take Artists Space tumblr log, the key to the action was in the language used: “Take That Which is Already Yours.” It’s impossible to “occupy” something that is already yours – but it must be taken back, indefinitely. Zuccotti Park and Oscar Grant Plaza must not be just “reoccupied” in response to this recent wave of state repression. They must be taken permanently. Now the real work begins. We must change the political situation. “Occupy Everything” is literal, and because of that, stop saying “Occupy.”

After the initial wave of terror and fury, my post-election tactic has mostly been dissociation. Out