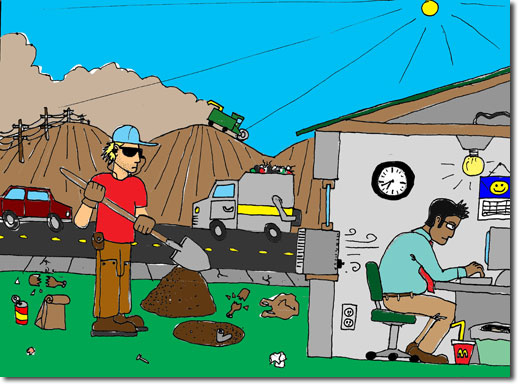 To everyone feeling screwed over by the economy,
We are told that our problem is that there aren’t enough jobs. This message is everywhere. The media gauges our plight with regularly updated unemployment statistics. Politicians debate theatrically over who can create more work. People everywhere clamor for scarce positions at factories and corporations.
I’d like to point out the great irony of this situation — people hate their jobs. How many people do you know who love their job? The truth is, most of us who have ordinary jobs can barely tolerate them. All else being equal, we’d rather not do them.
Work ethic is something this society takes pride in. But, if we are honest, we will confess that we call ourselves ‘hard working’ primarily to rationalize the daily abuses, deprivations, and indignities of the workplace. Work ethic is the only ethic most of us satisfy at our jobs. I think we can agree that most of our jobs aren’t making the world a better place.
So here we are, bickering and begging to fill roles we hate. 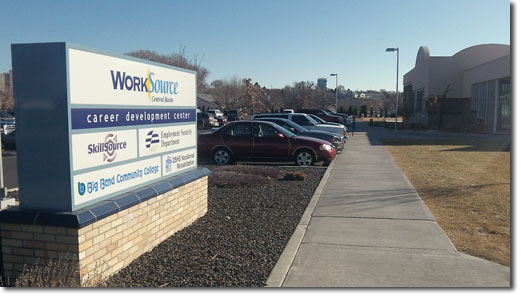 We should remember, that ‘employed’ is just another word for ‘used’. Just as you might employ a hammer and nails, your employer employs, or uses, you. The term ‘used’ very aptly describes our relationship with our employers. Like prostitutes, we resign ourselves to fake relationships for an empty cash return. In a healthy relationship, our devotions are reciprocated in kind. But in a relationship of use and abuse, the best you can expect is a cash settlement.
It should not surprise us, then, that politicians and other powerful people will laud our enthusiasm for employment and champion that cause. To the elite, unemployment is a crises because it means that the population is insufficiently used. An unused population is unprofitable, and potentially unruly. So, when the wealthy come to our rescue, they do it with jobs. As the Bill and Melinda Gates Foundation slogan goes, “We believe that all people deserve the chance to lead healthy productive lives.” (emphasis mine)
Employment has become almost inseparable from other values like responsibility and human welfare. In our culture, promoting employment has become synonymous with supporting families, communities, and countries. At a time when we are so utterly reliant on employment and the economy for our survival, being anti-job is like being anti-life. Who but the laziest and most unrealistic sort of hippie would oppose jobs?
But let us not forget; people were not always so dependent on employment or the economy for survival. In fact, we’ve been hunter/gatherers for most of our existence. Money, the economy, and even farming are relatively recent contrivances. We made them up. And, until very recent history, jobs were merely part of a mixed strategy used by families to make a living. Hunting, gathering, gardening, crafting, gifting, cooperation, trade, and self-employment, are all perfectly viable ways to make a living. Our grandparents recognized that money wasn’t always the most effective way to meet a need. Living by paycheck alone was a thing for the urban wealthy.
At periods in history, it’s been possible for some people to use currency to maintain an affluence disproportionate to the real value of their work. We may be nearing the close of such a period. Unfortunately, alternatives to employment are growing scarce. 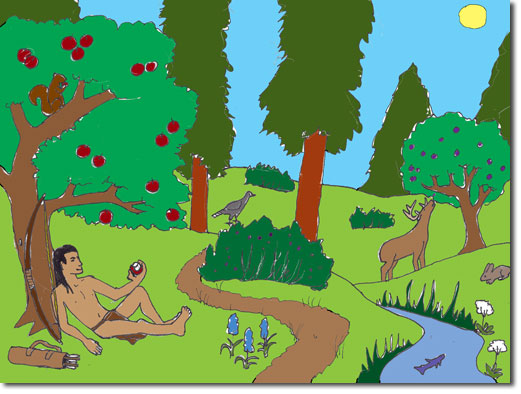 It’s not something taught in history class, but our reliance on employment stems ultimately from the destruction and monopolization of our environment. People once relied exclusively on free natural resources. The trend toward universal employment has followed in lock step with the destruction of those resources. When the things we need are no longer freely available in nature, we’re forced to labor at ever more complicated and dubious methods of resource extraction. The story of our culture’s relationship with American Indians and other indigenous cultures, illustrates the common pattern.

My young men shall never work. Men who work cannot dream; and wisdom comes to us in dreams. You ask me to plow the ground. Shall I take a knife and tear my mother’s breast? Then when I die she will not take me to her bosom to rest. You ask me to dig for stone. Shall I dig under her skin for her bones? Then when I die I cannot enter her body to be born again. You ask me to cut grass and make hay and sell it, and be rich like white men. But how dare I cut off my mother’s hair? — Smohala, Wanapum spiritual leader, 1851

Time and time again, indigenous resistance to work, as we know it, only broke when traditional resources failed. 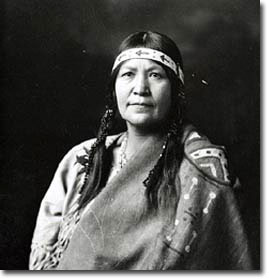 My people did not farm and had no use for crops until the salmon runs began to disappear from the streams and rivers. White activities causing pollution, and commercial fishing projects were the cause of this. Every year, the Colville found fewer salmon to take, not enough to live on, and so began to farm to stay alive. Finally, dams were built on the Columbia and the salmon were stopped altogether from coming above Grand Coulee. The salmon were gone, and high powered rifles are doing about the same to our game animals. By the time we saw the need to farm, the younger generations realized their ancestors had let the whites have the richest and most fertile bottomland. And it was too late to get it back. — Mourning Dove, Colville author, 1888-1936

The indigenous haven’t been the only people forced to deal with resource destruction and monopolization. Corporations and governments are actively marginalizing our access to clean water, healthy food, safe shelter, and social support. All of these things, once provided freely by our environment, are now increasingly expensive.
It’s not just our physical environment that is being destroyed. Our social and psychological environments are also under attack. Economic pressures, advertising, and propaganda have undermined the self-reliance of families and communities. Perhaps the ultimate victory of consumerism is that many people have lost their ability to find meaning outside of work. Many people will tell you they simply wouldn’t know how to spend their time without a job. Can they really see no higher value in their lives? Without respect for ourselves, and the support of others, there’s no climbing out of this abusive system.
The influence of the world’s powerful minority should not be underestimated. But those of us in privileged countries need to understand that this economic ‘crisis’ is largely due to the world, and perhaps mother nature herself, finally calling our bluff. The fact that our economic prosperity can falter so rapidly is proof that our wealth is not based on the real value of our work, but our success in a deceptive and exploitative game. We owe our declining wealth to mountains of debt and our lucky political position, and we’ve milked them for all they’re worth. We’ve been cheating people out of real value, for novelties and speculation, since the fur trade era. And now, bubbles are bursting.
Our way of life has also depended on finite fossil energy resources. This is not to mention threatened soils, waters, and forests. And the world is getting more crowded. It might be time to figure out what it actually looks like to live within our means.
But let’s be clear. We don’t need more jobs. We need access to the basics of survival. We don’t need more money. We need to heal our environment. We don’t need employers to keep us busy. We need time to make our communities into healthy habitats for people again.
The less we participate in this abusive economy, the better. 10% unemployment is deplorable. We need 90% unemployment. If we really resent this system, let’s earn less, buy less, and own less. Let’s invest our time, energy, and resources in things that can’t be taxed or parisitized by corporations. Let’s deal not in dollars, but in energy, nutrients, materials, local currencies, and relationships. Let’s not expand, let’s stabilize. Let’s enjoy art, culture, and leisure. Perhaps we can topple the pyramid by shrinking the bottom.
Our work is this: We’ve got to make clean water available wherever rain falls. We’ve got to make food grow so rampantly that you can’t give it away. We need to build affordable and debt free housing. We need to start creating opportunities where we live so we don’t have to drive. We need to wrest control of land and resources away from powerful minorities. We need integrative, sustainable methods for managing land. We need to ranch in a way that makes game more abundant. We need to farm in a way that makes forests grow. We need to use energy in a way that generates peace and stability. We need to strengthen our social bonds.
If you still have a job, get everything in order, and quit. Do it as soon as you can, because we’ve never had a more important work to do.
article source: http://permaculture.org.au/2012/02/10/to-everyone-feeling-screwed-over-by-the-economy
Editor’s Note: If you enjoy the article below, and you missed Kyle’s past 3-part series, amongst others, be sure to check them out! (Part I, Part II, and Part III.)
Tags: Ecologygeneral strikeglobal movementno workPolitical Theory