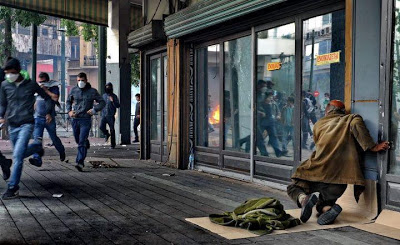 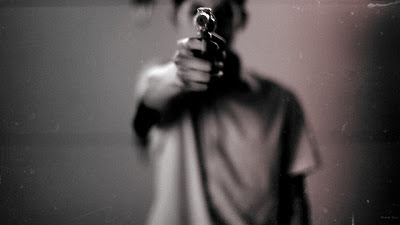 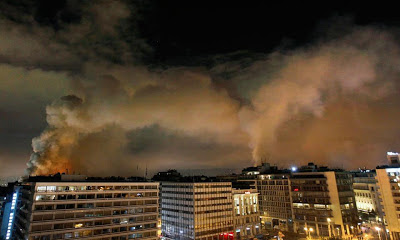 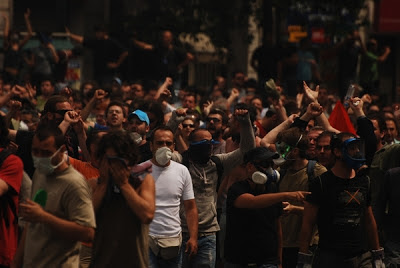 “To analyze the psychology of political violence is not only extremely difficult, but also very dangerous. If such acts are treated with understanding, one is immediately accused of eulogizing them. If, on the other hand, human sympathy is expressed with the Attentäter, one risks being considered a possible accomplice. Yet it is only intelligence and sympathy that can bring us closer to the source of human suffering, and teach us the ultimate way out of it.”

The opening lines of Emma Goldman’s essay The Psychology Of Political Violence are as resonant and applicable now, as they were when she wrote them nearly one hundred years ago. When looking at political writing pre-dating much of the bloodshed of the 20th century, it has become common to complain that they are written from a naive point of view, a point of view unacquainted with the results of the evils of Nazism and Stalinism; the two most oft cited examples of violent régimes associated with politically motivated violence. The 20th century was a violent century (though no more so than other centuries in context), but film and television allowed it to be seen and then seen again repeatedly; to confirm this for us and remind us of things and events that are apt to disappear into obscure textbooks and the fallible memories of people .

In addition the scope of history, which is now wider and deeper than previously, recalls far more than the “official histories” fed to schoolboys for generations. Despite the reluctance of historians to completely give themselves up to a proletarian view of history, the view of history from the other side; the history minus the double-barrelled names and powdered wigs, has permeated the subject to a considerable degree, so that instead of French history only being recalled in the guise of Napoleon’s “greatness”, we can learn instead about the uprising of the weavers of Lyon, or the Paris commune without it being considered non-history and the seditious behaviour of dangerous people trying to bring down the government. Indeed the possibilities are there, the histories can be read, but they are also muted by the very fact that they have become “official histories”. They have been assimilated (to some degree) into the mainstream and thereby blunted and rendered less radical than they might otherwise be. The other element is the great plan of the 20th century rulers: the calming and hypnotizing of peoples likely to rise up to rebellion, by means of force, propaganda and the drug of consumption.

Political violence has gone out of fashion only in a partisan respect: sixty years of, chiefly American, propaganda has associated political violence with anarchists, Marxist rebels, left-wing rogue elements, South American and Arab terrorists and every other movement to some degree associated with political uprisings. As certain newspapers and televisions have pumped out stories of the ‘horrors’ committed by ‘dangerous revolutionaries’ trying to enslave free-people and every other supposed anti-American element, it has taken much longer for a different picture to emerge of the widespread terror and murder and wholesale destruction of countries and peoples perpetrated by the neo-conservative/neo-liberal consensus of the United States and its allies. It is a picture sketched-out in declassified documents and the alternative histories, all of which is either mildly to vigorously suppressed or spun into a vortex of double-think by consummate and accomplished liars.

Within the left of politics, some of this has managed to filter through. As a method of dissociation from condemned régimes (Stalin’s USSR, Nazism and neo-fascism, the Khmer Rouge, the Iranian regime) dozens of socialist, communist and anarchist parties and groupings have declared themselves essentially non-violent. It is as if this act renders them more legitimate in a political climate that condemns one man’s violence on the one hand and presses the button to release cluster bombs on the other. The argument from sections of the official left is a product of anti-hypocrisy, or the fear of hypocrisy: that condemning violence from one quarter whilst perpetrating one’s own violence is the height of hypocrisy. They are wrong. They miss a crucial point: namely that there is a difference between violence used to oppress and keep oppressed, and violence used to break the cycle of oppression. It is the difference between anti-social violence and social violence.

The horrors and miseries of the 20th century have long been used as a powerful talisman to discourage what comes naturally to people under the pressure of too much social control and too much economic injustice. The neo-conservative/neo-liberal machine has used the results of its own crimes to discourage people from reaching for everything these crimes have suppressed. It has worked, the world sighs at the murderous horror of South American coups and counter coups; at the ceaseless bombings in Israeli-occupied territories. At this very moment, as street battles rage in Greece, there are condemnations of violence from the very quarters whose regimes and policies have made the situation the untenable one that it is, and anything else impossible. The mantras of “ballot over bullet” and “peaceful change” conceal régimes that sustain themselves on the very violence they condemn.

Reading Emma Goldman’s The Psychology Of Political Violence, puts vigour back into the idea of revolt and rebellion, and also the righteousness of rising up to take back humanity from minorities of people who dehumanize and oppress and hypnotize with lies and false freedoms. All the struggles remain essentially the same in character, only names and dates are different. Restoring the difference between glorified indiscriminate killing and violence in the name of freedom is long overdue.


Download and read:
The Psychology Of Politcal Violence:
http://socialistpublishing.files.wordpress.com/2008/12/goldman-tppv.pdf