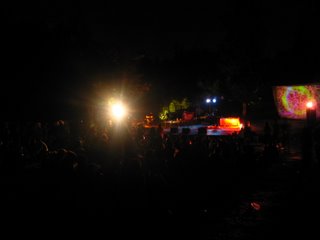 What is Void Network?

Void Network was originated as an autonomous affinity group in 1990 in Athens Greece .From then until now and with the participation of Global Eye (London Void Network) and WarCryCinema (New York Void Network) by Void Network have been organized more than 170 public situations in many different countries that attracted from 1000 to 7000 people in Outopian Autonomous Ephemeral Zones (in universities ,squatted buildings, old industries ,parks ,city squares ,forests ,sea sides) ,
Void Network is a spiritual and political wave manifested by activated artists, thinkers, travelers and scientists, helping the process of global community understanding the interdependence and universal relatedness through artistic poetical and philosophical manners.
The production of art pieces, the networking of information and the manifestation of social gatherings into the form of exhibitions, poetry shows, open talks and experiments of public dialogues, lectures, assemblies, demonstrations, festivals and space celebrations are the main way that this work takes place.

Is Void Network an organization?

NO! Void Network doesn’t exist and will never exist as an organization or any kind of non-government or non-profit organization. You can not sign yourself in as a member or sign yourself out of it .Void Network is an open process of spiritual and intellectual meeting, collaboration and sharing of spiritual contact .We believe that there is no type of closed group organization that can bring social and spiritual awareness. We meet in the open ,transparent and sincere kindness …We meet on the real social and spiritual exercise of life .Flowing in public spaces ,endless aggregates and disaggregates, channels of information, tune in activities, sharing inspiration with only one cause :
To help in our own way each other the polymorphic cultivation of global liberation from suffering, ignorance and exploitation .We know that “Truth is a pathless land and we flow our way for there …

Void has no cause and no effect, has no government , no governance and no governed ones, no rules and no confusion, no form and no formlessness, no mind and no ignorance, no will and no narrowness, no hope and no desperation .

What is your tacit agreement?

We agree on the idea that must appear all around the planet autonomous networks of people and temporary and permanent autonomous zones ,created by “common people”, people with common and interconnected interests, people who are ready to challenge themselves through these communities, to challenge their institutions ,to challenge their own society and to challenge their governments .We agree that the self –transformation cannot happen without radical social change ; the radical social change cannot happen without self –transformation .We agree about the need of searching for change in many different aspects of the organization of social life in the world : politics, economy ,the relation between the oppressor and the oppressed, exploitation, human relationships, social events, the activities within the public space ,all of them and many more are conditions and processes that they ask for change .
We agree about the need of searching for new forms of social life based on anti-authoritarian anti-exploitative and anti-hierarchical manners.
We believe that whoever has whatever knowledge or inspiration has to have the common psychic need to share this for the benefit of all living beings .We believe that you can never be really happy until the moment that everybody is happy and this will never happen until the moment we start to search for the real meaning of happiness, end of suffering, ignorance, exploitation and all pervading Liberation.
(The things that we agree to each other are an open, transparent and transformative catalogue ready to change expand and open into new horizons through dialogue, communication, cooperation, personal and collective creation and sharing.)

Is there any absolute theoretical framework in your institution?

NO! Mainly because Void Network is an open-minded oriented situation characterized by the presence of a multidimensional whole of parallel ideas and the quest for the precise relations that may appear between some of them, there is not such thing as a theoretical system among us. Of course par example among us are people who follow “the Middle Path” Buddhist School of Emptiness (Madhyamika-Sunyavada )in their attempt to comprehend the meaning of Void ness – Inter dependence as it appears in Buddhist thought .Also there are among us Skeptiks, Atheists, Zen meditators and Taoists …But , as in all these philosophical schools ,within Void Network as well there is both a thorough going investigation and cross-examination of any phenomenon (social-personal and cosmic) , and also a strong skeptical attitude .
There is also a strong skeptical attitude towards any kind of dogmatism, close beliefs; closed systems of thought and of course any kind of authoritarian systems.

What is the opposite of “Void”?

To avoid! To avoid becoming responsible as a social being for the ways social life is structured and manifested around you, to avoid the open sharing of knowledge, wealth and opportunities, to avoid caring, to avoid helping, to avoid thinking about poverty and suffering around you and inside you, to avoid participating in Assemblies, spiritual and creative Communities, to avoid having Spiritual Friends, to avoid freely experiencing your views ,your dreams, your wishes, to avoid being kind, spontaneous, inspirational, open hearted, compassionate, full of love, humble and gentle …in short to avoid Love and Kindness.

What is your main political direction?

As the city of our origination is the ancient city of Athens Greece we sincerely reject any kind of Representative Democracy and any other of current political system.
We are anti Capitalists, anti Communists and anti Socialists. We reject the specialists’ monopoly to govern in the form of Kings or Queens, Politicians, Bankers or Multi-national Corporations Executives. We believe in non-centralized, autonomous, self-organized assembling societies compound by Free People who they compound Free Interdependent Organizations. We believe in the global work of millions of free networks and Non-Authoritarian Organizations, spiritual and political communities, productive co operatives, free open collectives made by free, open, collective people. We believe in the collective and private initiative for the benefit of all and in constant free distribution of any material or spiritual product. An abundance economy should replace the economy of profit, the economy of sharing should replace the exchange economy, the thanks-giving to replace trade. We believe in the societies and communities composed by people with Kosmo-Politikal consciousness .This means societies and communities achieving social, political, and economical equality but also societies with Kosmo-Politikal consciousness composed by people who have conquered the knowledge of global interdependence and they are ready to take the global responsibility for the best possible conditions of all the environment and for all organic and inorganic life in the planet in equal manners. We believe in global sharing of all the resources and wealth, open borders, respect of cultural and ethnological diversity, and of course respect on any kind of personal and collective creativity. We are Anarchists.