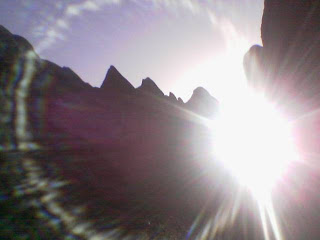 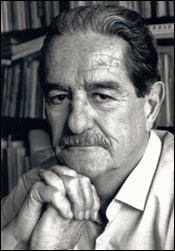 “Kostas Axelos was born on the 26th of June1924, and attended high school at the French Institute and the German School of Athens, Greece. Due to the unsatisfactory quality and level of studies in the Philosophy School, he enrolled in the Law School in order to pursue studies in law and economics. However, with the onset of World War II he turned to politics; during the German and Italian occupation he participated in the Greek Resistance, and later in the Greek Civil War, as an organiser, journalist, and ideologue of the Communist Party (1941-1945). He was later expelled from the Communist Party and condemned to death by the right-wing government. He was arrested and escaped.
At the end of 1945 Axelos moved to Paris, France, where he studied philosophy at Sorbonne. From 1950 to 1957 he worked as a researcher in the philosophy branch of C.R.N.S, where he was writing his dissertations, and subsequently proceeded to work in Ecole Pratique des Hautes Etudes. From 1962 till 1973 he taught philosophy in Sorbonne. His dissertation “Marx, penseur de la technique” (translated as “Alienation, Praxis and Techne in the Thought of Karl Marx”) tried to provide an understanding of modern technology based on the thought of Heidegger and Marx and was very influential in the 1960s, alongside the philosophy of Herbert Marcuse.
Axelos was a collaborator, columnist, and subsequently editor of the magazine Arguments (1956-1962). He founded and, since 1960, has run the series Arguments in Edition de Minuit. He has published texts mostly in French, but also in Greek and German. His most important book is “Le Jeu du Monde” (Play of the World), where Axelos argues for a pre-ontological status of play.
Axelos spends his time between Paris, France and Athens, Greece.
His main works are:
· Heraclite et la Philosophie,
· Marx Penseur de la Techique,
· Vers la Pensee Planetaire,
· Le Jeu Du Monde,
· Pour Une Ethique Problematique,
· Systematique Ouverte,
· Metamorphoses.
Biography retrieved from “http://en.wikipedia.org/wiki/Costas_Axelos“