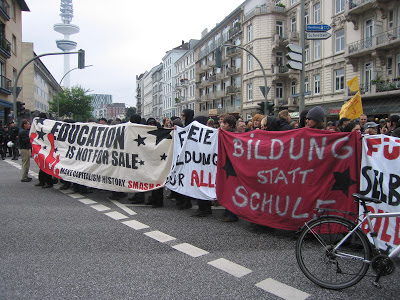 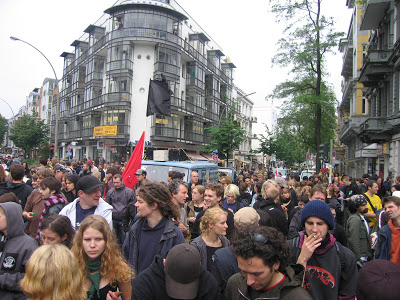 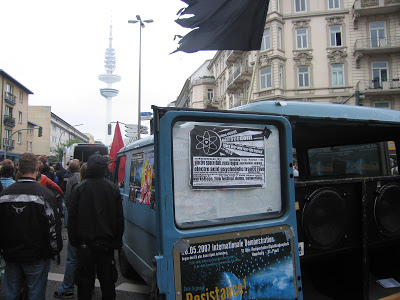 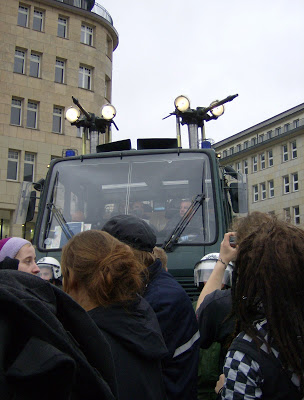 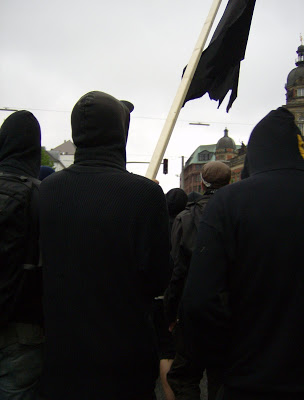 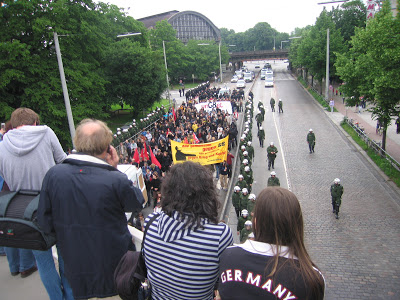 26 May 2007
Talking About Total Freedom>>situation 3>>
participation in the demonstration of the students of Hamburg against the obligatory student fees and the comercialization of public education in Europe!

It was like a parade of all the powers of German police during a demo of about
500 people!
The antifascists came in the front of the demo carying a banner that was sending a clear message:
“Education is not for sale!Smash Capitalism!”
Artcore Collective organized with us a sound system for this demo….A second sound system was also organized by the students…Our sound system burned out half way but people continued dancing in the sounds of drum n”bass and speaches of the students…A memeber of Void network spoke for the sake of international students mentioning that this fight of the students in Germany is one and same with the fights of all students in Europe…in Greece, in Italy, in France, in Spain…a fight for Free Open Public Education for All…He mentioned also that a fight for free education is a fight against capitalism…a fight against G8…and when he shouted “Fight Against Capitalism! The only Solution is Revolution!!”
all the people shouted back together “Revolution!”
The AntiFascists opened the way and sustained the powers of the demonstrators until the end…It was a humilliation of any “representative democracy” system…The police tryed to stop the demo using many excuses…that the use of a banner bigger than 1.5m is not allowed …that it is not allowed to jump…that it is not allowed to come in the center of the city…all these reasons…reasons to brake the people, keep them standing for hours surrounded by full-armed riot policemen and make them dissapointed and depressed…
The Necropolis is the city of the future…
Try to stay alive in the Necropolis!
The totalitarianism of European states
reaches a level of visible dictatorship…
Can you See????