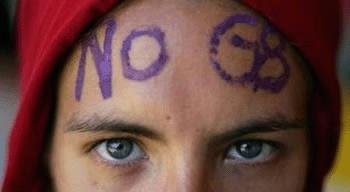 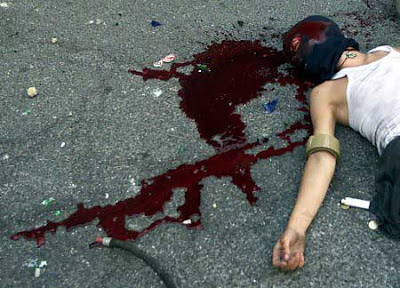 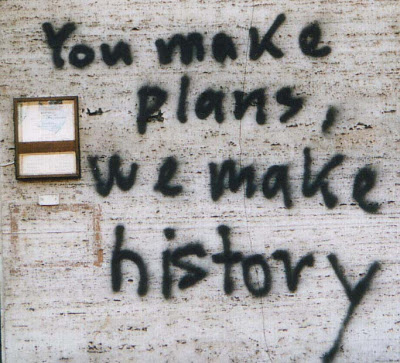 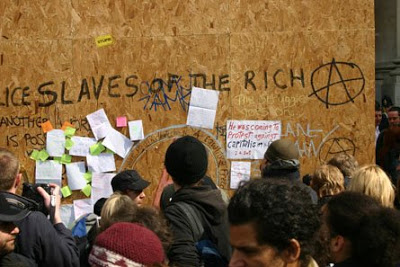 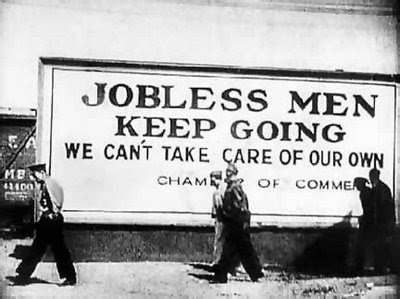 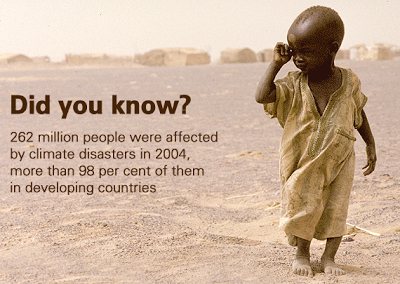 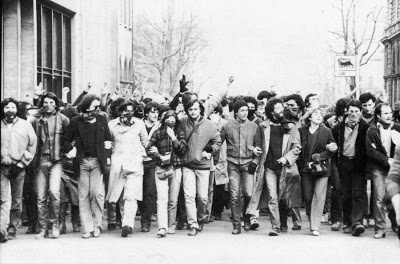 Wandering about the lack of serious invitations or preparations from the side of Italian Movement against the meeting of G8 leaders in Italy during July 2009,… as we are searching for voices of revolt and resistance in Italian society, as we observe the Italian antagonistic movement to follow the way of the Left parties into oblivion, as we observe the Italian fascists to take more and more power in Italy day after day and leading the worst conservative white pride visions of all Europe on the way to hell, we are publishing this wonderfull manuscript from Italian collective Wu Ming ( a writers group, ex part of Luther Blisset collective and main authors of the book “Q” and others)
From the Multitudes of Europe
Rising Up Against the Empire
and Marching on Genoa (19-20 July 2001)
by Wu Ming collective
We are new, and yet we are the same as always.

We are ancient to the future, an army of disobedience. For centuries we have marched, armed with stories as weapons, “dignity” emblazoned across our ensigns.
In the name of dignity we fight those who play the lords and masters of people and meadows, forests and waters. Those who rule arbitrarily, impose the order of the Empire and impoverish the communities.

We are the peasants of the Jacquerie. Our villages were plundered by the mercenaries of the Hundred Years War and the nobles made us starve. In the Year of Our Lord 1358 we took up arms, destroyed their castles and took the ill-gotten back. Some of us were captured and decapitated, blood flowed from our noses, but we were on the march and we would not stop again.

We are the ciompi of Florence, the workers of factories and the minor arts. In the Year of Our Lord 1378 a carder led us to rebellion. We took over the city council and reformed the statute of arts and professions. The lords escaped to the countryside and organized the siege of the town. After two years they defeated us and restored the oligarchy, but nothing could stop the contagious spirit of our example.

We are the peasants of England who battled against the nobles to get rid of tolls and excises. In the Year of Our Lord 1381 we heard the preaching of John Ball: “When Adam dalf and Eve span / Who was then a gentilman?”. We set off from Essex and Kent with pruning hooks and pitchforks. We occupied London and set buildings on fire. We sacked the palace of the Arch-bishop and opened the doors of jails. By the King’s appointment many of us went to the gallows, but things had been changed forever.

We are the Hussites. We are the Taborites. We are the Bohemian labourers and craftsmen who rebelled against the Pope, the King and the Emperor after Ian Hus was burnt at the stake. In the Year of Our Lord 1419 we assaulted the town hall of Prague and threw the burgomaster and the councillors out the window. King Wenceslaus died of a heartache. The powerful of Europe waged war on us, and so we called the Czech people to arms. We drove back all invasions, counterattacked and entered Austria, Hungary, Brandenburg, Saxony, Franconia and the Palatine. The heart of a continent was in our hands. We abolished servitude and the tithes. We were defeated after thirty years of war and crusades.

We are the thirty-four thousand men that answered the call of Hans the Piper. In the Year of Our Lord 1476 the Madonna of Niklashausen appeared to Hans and said:
“There shall be neither kings nor princes, neither papacy nor priesthood, neither taxes nor tithes. Meadows, forests and waters shall belong to all people. Every one shall be a brother to each other, possessing no more than his neighbour”.
We arrived on the day of St. Margaret, a candle in one hand and a spear in the other. The Holy Virgin would tell us what to do. The knights of the Bishop captured Hans, then they attacked and defeated us. Hans burned at the stake, but the words of the Virgin did not.

We are the String Shoe, the labourers and peasants of Alsace. In the Year of Our Lord 1493 we conspired to kill the usurers and cancel all debts, confiscate the treasuries of the monasteries, reduce the priests’ incomes, abolish oral confession and establish local courts elected by the communities. On Easter Sunday we attacked the stronghold of Schlettstadt. We were defeated. Many of us were arrested and put on the rack, to be quartered or decapitated. Many were crippled by having their hands and fingers chopped off, and were driven out of the country. Yet those who kept marching spread the String Shoe throughout Germany. After years of repression and re-organization, the String Shoe rose up in Freiburg in the Year of Our Lord 1513. The March
went on, and the String Shoe has never stopped.

We are Poor Konrad, the peasants of Suabia that rebelled against the taxes on wine, meat and bread, in the Year of Our Lord 1514. We were five thousand and threatened to conquer Schorndorf, in the valley of Rems. Duke Ulrich promised he would abolish the new taxes and examine the peasants’ complaints. He was only seeking to keep us quiet and gain time. The revolt spread all over Suabia. Our delegates were admitted to the diet in Stuttgart. It was decided to depose and punish three of the hated councillors of the Duke, to add to the Duke a council of four knights, four burghers and four peasants, and to confiscate the monasteries and the endowments in favour of the State treasury. Ulrich convened another diet in Tuebingen, and his neighbours helped him gather troops. It was not easy to take the valley of Rems by force: Ulrich besieged and starved Poor Konrad on the mountain of Koppel, then he plundered the villages. Sixteen hundred peasants were captured, sixteen of them decapitated, and the rest received heavy fines. And yet Poor Konrad still revolts.

We are the peasants of Hungary that rallyed for the crusade against the Turk, and decided to wage war on the nobles instead, in the Year of Our Lord 1514. Sixty thousand armed men, at the orders of commander Dozsa, spread the insurrection all across the country. The army of the nobles surrounded us at Czanad, where a “Republic of Equals” had been founded. They captured us after a two months’ siege. Dozsa was roasted on a red-hot throne, his lieutenants were forced to eat his flesh. Thousands of peasants were impaled or hanged. The massacre and the impious Eucharist led the March astray, but could not stop it.

We are the army of peasants and miners that followed Thomas Muentzer. In the Year of the Lord 1524 we shouted: “All things are common!” and declared war upon the world order. Our Twelve Articles shook the powerful of Europe. We conquered towns and won the hearts of the people. The Lansquenets exterminated us in Thuringia, Muentzer was torn to pieces by the headsmen, and yet nobody could deny it: all that belonged to the earth, to the earth would return.

We are the “Diggers”: a community of unemployed labourers and landless peasants. In the Year of Our Lord 1649 we gathered in Walton-on-Thames, Surrey, occupied the common land and started to dig it up. We wanted to live together and share the fruits of the earth. The lords of the manor aroused the populace, we were seized and locked up by an angry mob. Countrymen and soldiers assailed us and trampled our crops. When we cut the woods on the common, the landlords sued for damages and trespass. We moved to Cobham Manor, built four
houses and started a crop of winter grain. Troops attacked us, destroyed the houses and again trampled the fields. We persisted. Other diggers started crops in Kent and Northamptonshire. A mob drove them out. The law defeated us and we set out again.

We are the serfs, miners, fugitives and deserters that joined Pugachev’s Cossacks to overthrow the autocracy of Russia and abolish servitude. In the Year of Our Lord 1774 we conquered strongholds, confiscated riches and moved to Moscow. Pugachev was captured, but the seed was going to bear fruit.

We are the army of General Ludd. Our fathers were cleared off their lands and we became weavers. Then came that weaving machine. In the Year of Our Lord 1811 we ran across the countryside of England, stormed factories, destroyed machines and laughed in the face of constables. The government sent thousands of soldiers and armed civilians. A disgraceful law established that machines were more important than human beings, and those who destroyed machines had to be hanged. Lord Byron warned:
“Is there not blood enough upon your penal code, that more must be poured forth to ascend to Heaven, and testify against you? How will you carry the bill into effect? Can you commit a whole country to their own prisons? Will you erect a gibbet in every field and hang up men like scarecrows? Or will you proceed (as you must to bring this measure into effect) by decimation? . . . Are these the remedies for a starving and desperate populace?”
The rebellion broke out, but we were tired and underfed. Those who escaped the slip-knot were deported to Australia. And yet General Ludd still rides at the edge of the fields, in the dead of night, rallying his troops.

We are the workers of Cambridgeshire under the orders of Captain Swing. In the Year of Our Lord 1830 we rose up against despotic laws. We set barns on fire, destroyed machines, threatened landlords, assaulted police stations and executed narks. We were sent to the gallows, but the call of Captain Swing would gather a bigger army. Their advance would raise a dust that soiled all coppers’ coats and judges’ gowns. The assault on the sky would last 150 years.

They say that they are new, they christen themselves by acronyms: G8, IMF, WB, WTO, NAFTA, FTAA… They cannot fool us, they are the same as those who have come before them: the écorcheurs that plundered our villages, the oligarchs that re-conquered Florence, the court of Emperor Sigismund that beguiled Ian Hus, the diet of Tuebingen that obeyed Ulrich and refused to admit Poor Konrad, the princes that sent the lansquenets to Frankenhausen, the impious that roasted Dozsa, the landlords that tormented the Diggers, the autocrats that defeated Pugachev, the government whom Byron cursed, the old world that stopped our assaults and destroyed all stairways to heaven.

Nowadays they have a new empire, they impose new servitudes on the whole globe, they still play the lords and masters of the land and the sea.

Once again, we the multitudes rise up against them.