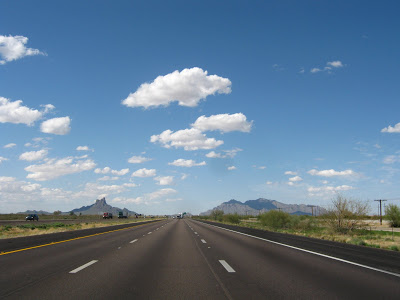 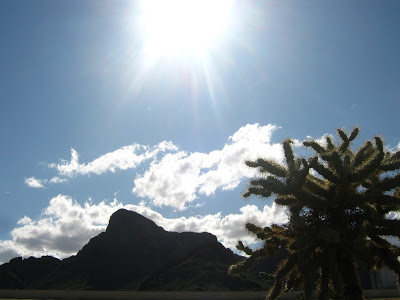 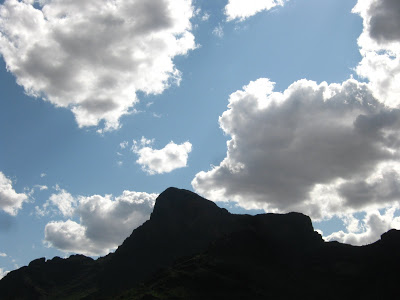 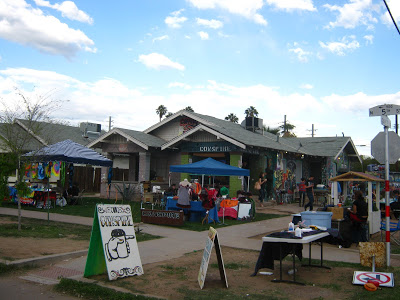 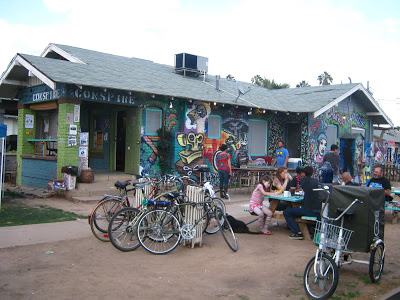 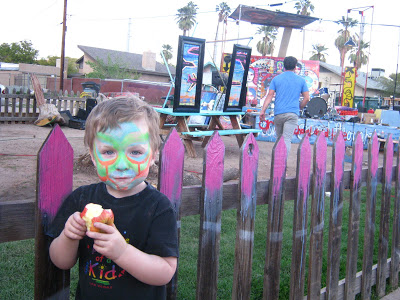 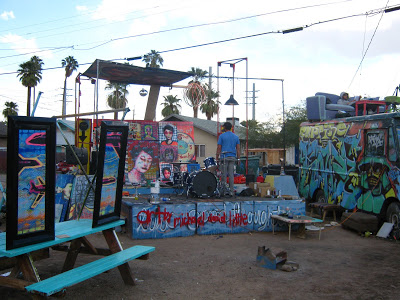 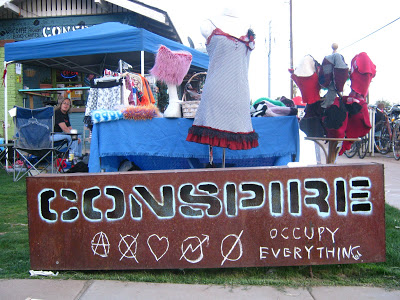 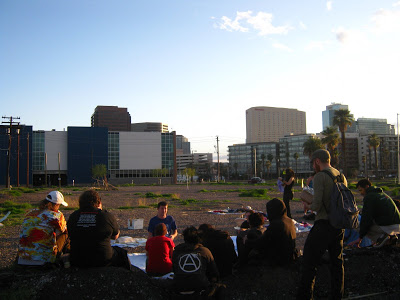 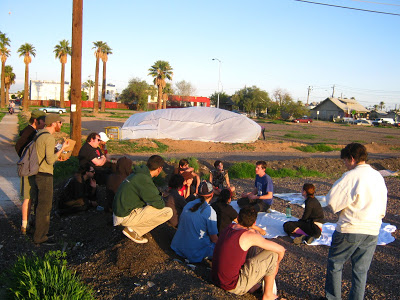 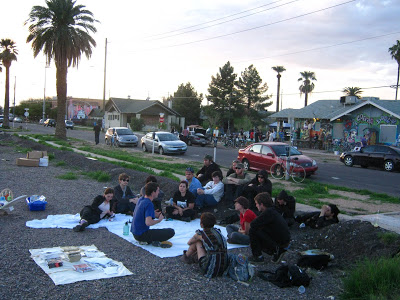 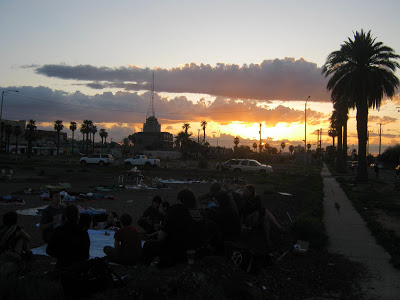 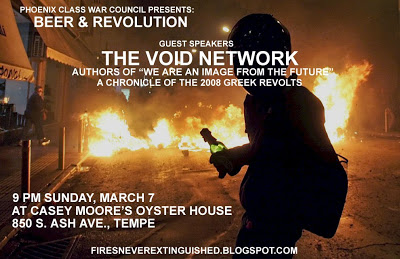 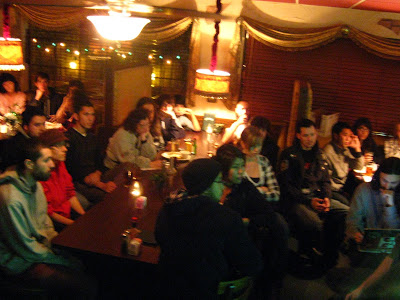 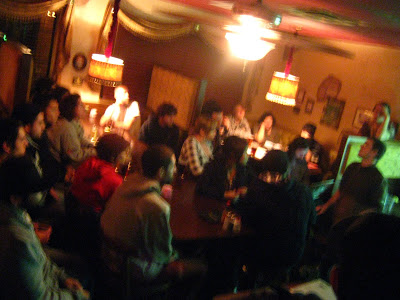 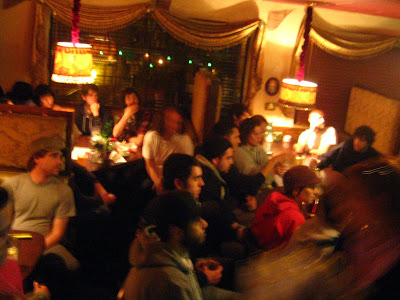 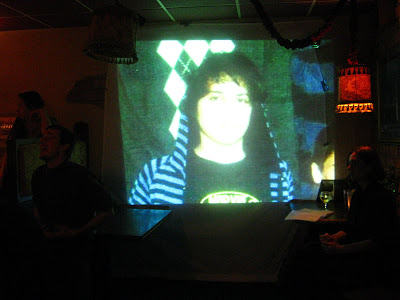 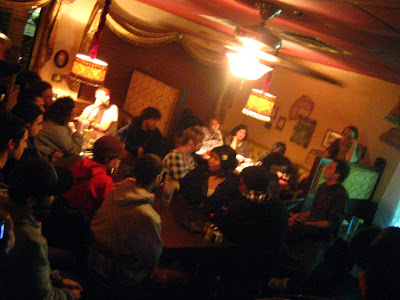 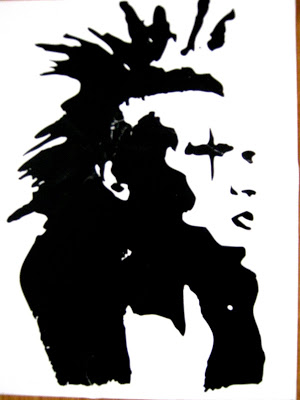 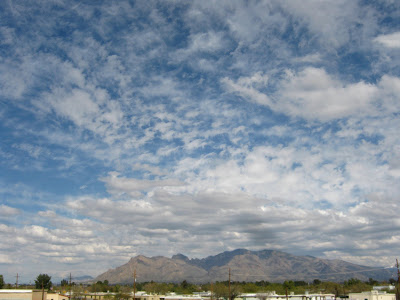 For sure the most important thing that happened in Phoenix during our two days of events, public lectures, festivity and endless drinking of beers and talking with comrades, it was our meetings with the O’Odham Native American comrades from O’Odham Solidarity Across Borders Collective [http://oodhamsolidarity.blogspot.com/]. O’Odham Native American Tribe resists against the colonalization from the middle of 16th century until today together with all other indigenous people of amerikkka. One form that this struggle is taking place now is the creation of  alliance  D.O.A. (Dine/Navajo-O’Odham-Anarchists/Antiauthoritarians)[ read info: http://oodhamsolidarity.blogspot.com/2010/01/call-for-dine-oodham-anarchistanti.html]  a platform of meeting, understanding and organizing. For all possible deeper understanding of the struggle of O’Odham against genocide you have to read : Collaboration and Resistance (O’Odham Responses to United States invasion)  [ http://www.tiamatpublications.com/docs/Collaboration_and_Resistance.pdf ].

Of course, all this meetings, talks and organizing of our days in Phoenix could not ever happen without the great efforts, the great knowledge and the great friendship with our comrades of the collective Phoenix Class War Council [ http://firesneverextinguished.blogspot.com/ ]. Hours and hours of talk and drinking before and after our event in Phoenix offered to us some deep understanding of American racism, white supremacy and strategies of social domination. For more about class war in amerikkka read here:
[ http://firesneverextinguished.blogspot.com/2009/01/articles-and-analysis.html ]
and here:
[ http://firesneverextinguished.blogspot.com/2008/01/recommended-reading.html ]
Void Network shares with Phoenix Class War Council , among many others, the common understanding that as long as a movement doesn’t understand the culture of the society in which it exists, as long the struggles are not historical and cultural situated and as long the movement don’t have the power to learn from its history and keep the memory of the social struggles alive and usefull, then there is not any real influence of this movement to the society, so its a loss of time.
In the first tour day in Phoenix, Peter Gelderloos spoke about the squats and the social centers in Barcelona in an open air event organized by Conspire art cafe
[ http://www.mobaction.com/conspire/about.html ] in an area of Phoenix that vibrates creative anarchy, chaos and psychedelic freak-out art mobaction
[ http://www.mobaction.com ]
In the second day of our staying in Phoenix the talk of cultural activists from Void Network about the Greek social insurrection took place in a packed bar. Phoenix Class War Council organizes every month the event Beer & Revolution [ http://firesneverextinguished.blogspot.com/2010/03/this-sunday-marchs-beer-revolution-with.html ], inviting important groups, writers and activists to share their ideas with the radical people of Phoenix. It is a well organized and well advertised event that creates a meeting point for the sharing of experiences and debate of analysis. For more than 3 hours the Void Network editors of the book We Are An Image From The Future were answering questions of the people of Phoenix about the history, the strategies of struggle, the ideas and the practices of the Greek insurrectionary political affinity groups.
Many people from different local political groups offered their points to the talk and created an atmosphere of friendship and deep dialogue. Among them they were students of the Arizona State University that participate in the struggle for the liberation of education in amerikkka [ http://asuresist.wordpress.com/ ], and people from the collective So What If All The Colleges Burn Down :
[ http://sowhatifallthecollegesburndown.blogspot.com/ ]
They were also people from the Arizona Indymedia [ http://arizona.indymedia.org/ ],
the Arizona Zeitgeist Movement [ http://arizonazeitgeist.ning.com/ ], the StriveDreams art center [ http://strivedreams.com/m23/artworks/index.html ], and the very important network Indigenous Action Media[ http://www.indigenousaction.org/ ].
Tags: Dine Navajo O'Odham Phoenix Class War Council O'Odham Solidarity Across the Borders Genocide Colonalization