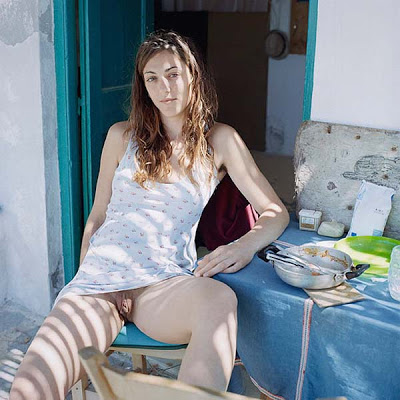 Panayiotis Lamprou, “Portrait of My British Wife” (via guardian.co.uk)
Vexed: Brief Points on Art, Voyeurism and Pornography
by Augustine Zenakos
In an article in The Guardian about a photograph by Panayiotis Lamprou, Portrait of My British Wife, on the shortlist of this year’s Taylor Wessing photographic portrait prize, the writer asks what he admits is a “vexed question”: “When does art become voyeurism or, indeed, pornography?”
The first problem with such a question is the precise way it is posed: the concept of pornography is not a direct extension – a kind of ‘bloating’ – of the concept of voyeurism, as is implied by the way the question is formulated. A consumer of pornography is not simply a less inhibited voyeur. In fact, whereas voyeurism may be an extremely ‘open’ concept that easily lends itself to metaphor, pornography is a very ‘closed’ concept that does not lend itself to metaphor at all. (Whereas there is a metaphorically voyeuristic, there is no metaphorically pornographic.) If I were to attempt a definition, I would suggest that pornographic is the kind of image where any narrative is rendered meaningless in favour of explicitness.  (That is why In Thru the Backdoor 2 is pornography, whereas In the Realm of the Senses is not.) Voyeurism does not work in the same way. The voyeur, actual or metaphorical, inscribes him/herself in a narrative, the consumer of pornography is deprived of it.
The second problem with the question is that art and voyeurism are hardly mutually exclusive. More precisely, if we concede that something is voyeuristic, this does not preclude its being art. On the contrary, the element of voyeurism is crucial in countless Venuses and Magdalenes that we admire as great works of art. In the same way, the photograph is quite clear: the fact that this is the photographer’s wife renders our viewing act indeed voyeuristic, but this forms part of the artistic function of the work – it is not its opposite.
The third problem is that whatever is sexually explicit is not necessarily pornographic. The determining factor for pornography is not sexual explicitness – it may rather be approached through the question: what else is an image, apart from sexually explicit, what else does it do apart from revealing all? The reason we cannot consider many works of art as pornographic is that they are complex interweavings of meaning, including narrative strands that incorporate sexual explicitness as their integral part. On the other hand, what makes a pornographic work is its insistence to include only the revelation-by-itself, its eclipse of all narrative, of all other meaning. This is clearly not the case with this photograph.
It seems that a “vexed” question begs a vexed answer: sometimes you can’t get a right answer, unless you have asked the right question.
Post scriptum: Much more interesting than the question of art versus pornography is the question of gender bias in the photograph. Meaning that, although a wife can of course be territorial about a husband, the photograph is dependent on the fact that only a wife can be a true ‘possesion’. This is one of those instances where oppressive speech, though not exactly appropriated as is the case in activist discourse, is given as an a posteriori key to a reading of the work, in order to imply its own oppressive content. This is complicated further by the implication in the designation ‘British’, with all its allusions to northern sexual repression thawed by southern sexuality. (Though not ‘casual’ sexuality, as has been argued; more appropriate would be to say ‘uninhibited’: shaved pubic hair and unshaved armpits hardly spell out casualness.) All in all, this is fighting fire (stereotypes) with fire: a primal fear is contained in the thought of losing one’s women to the PIIGS**. I have to admit I enjoyed it thoroughly.
**PIIGS : An acronym used to refer to the five Eurozone nations, which were considered weaker economically following the financial crisis: Portugal, Italy, Ireland, Greece and Spain. Since the nations use the euro as their currency, they were unable to employ independent monetary policy in order to help battle the economic downturn.
This article originaly is been published here :
http://thetrap.wordpress.com/2010/09/21/vexed-brief-points-on-art-voyeurism-and-pornography/