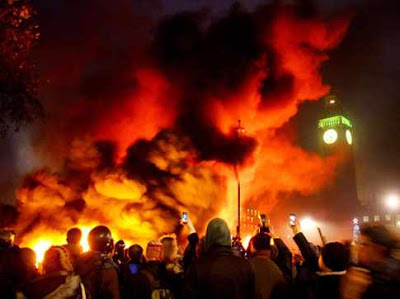 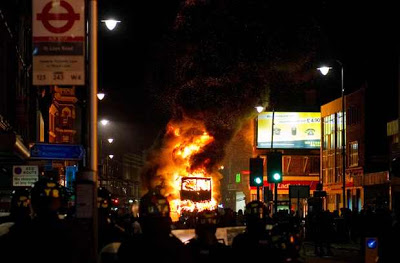 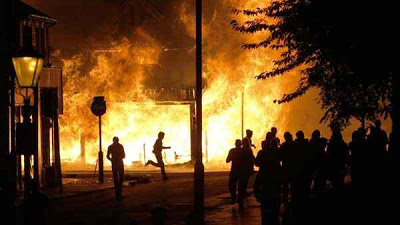 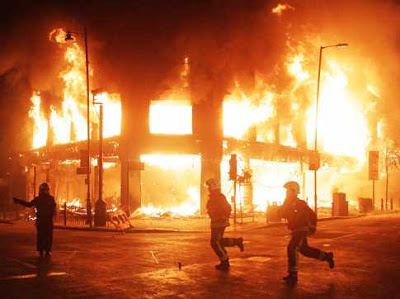 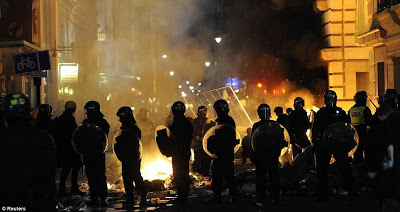 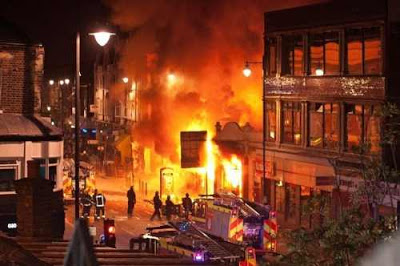 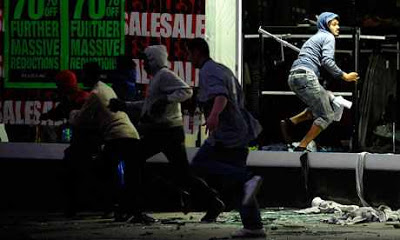 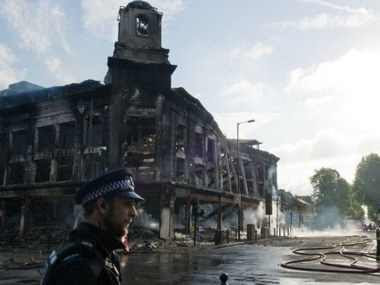 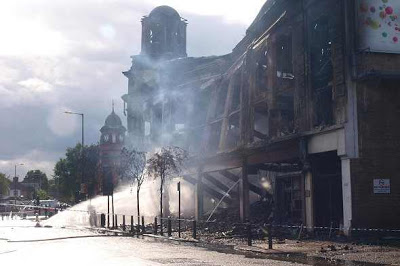 “the problem for police is that the rioters are different people, doing the same thing, in different places.”  :Scumbag U.K. prime minister.
~
A riot is the POWER of the multitude. The riot is that rupture that accelerates the non-representation of the multitude and denies all claims of codification, political and institutional. The multitude and the riot do not concentrate power nor transform politically, but disperse power and annul the political by rejecting adherence to the state. For the multitude, always engaged in civil war, the riot offers another potentiality towards insurrection.
~
The riot is the multitude’s pushing over the system – in hyperlogic; by forcing itself into extreme practice – the excessive, uncontrollable desire to consume, turned terroristic and threatened to abolish the system of oppressive exchange for one of potlatch. Here we find the potential of the looted gift to explode the rationale of the commodity.
~
It is as if a storm destroyed downtown. Nature runs riot and vice versa. Like a natural catastrophe the riot exists as a potentiality within every moment, and as such is suspended within the totality of the very social order it will destroy. The catastrophic storm is the mythical expression of the riot.
~
The riot is implosive, not explosive. It is control that explodes all around us, whilst empire expands. It is within the implosion that the multitude takes back, returns to structures outside command. Within the riot you can visualize industrial collapse and the emergent forms of life liberated from endocolonisation. The riot is the primitive-revolt of the multitude, the call of exodus.
~
From riot to insurrection? The insurrection is the sublimation of the riot finding consciousness in its violence. At its beginning the riot is a violent rupture that strikes from nowhere, it is terrorism. It will either leave a smoldering ruin or become conscious amongst the ruins. If the riot sustains itself, by dispersing its massive outpouring of energy into structures of mutual aid – a potlatch of destruction – it has become conscious of itself. If it persists to resist representations it will become insurrection, in that the insurrection will be the generalization of the conscious riot.
~
The riot is spontaneous, irrational, destructive, and an end within itself. Our hope is that it also contributes towards the end of what remains of the left – those who seek a revolution through a dialectical progress of social transformation. It’s the duty of antagonists to prepare, everywhere, for the fire next time, when a real state of emergency will transverse the reading of the riot act. To seek this coming situation as a site of intervention: for thinking and acting, where autonomous forms-of-life are produced and spread to every area of everyday life, creating in the riot-in-motion – the communes of the metropolis.
text: http://momentofinsurrection.wordpress.com/anarchy-in-uk-from-riot-to-insurrection-in-london/
Tags: Global StruggleLondon riots

Why Catastrophic Climate Change is Probably Inevitable Now –  Sometimes, when I write scary essays, I