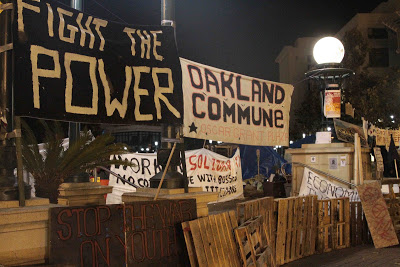 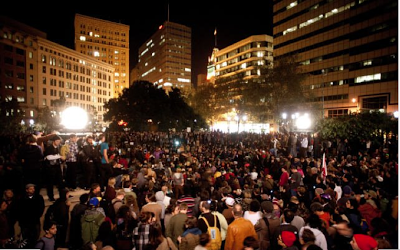 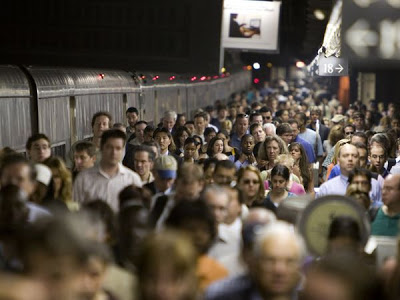 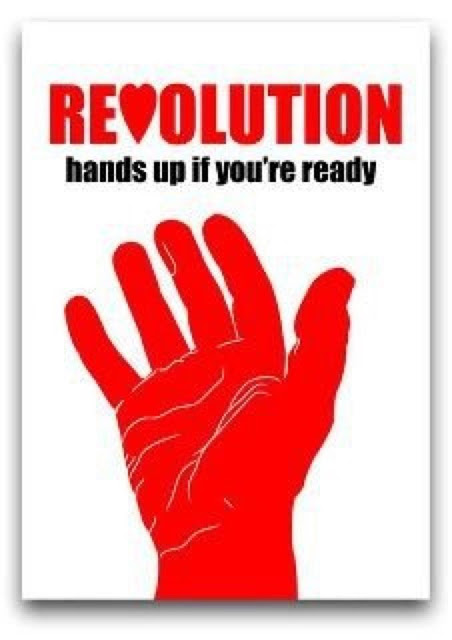 Over the winter, the social momentum that picked up with the occupation of Zuccotti Park has predictably cooled. We can be sure that conflict will intensify again soon, whether with the coming of spring or later; if overseas examples are any indication, we should anticipate new waves of unrest, each sweeping in new sectors of the population. In hopes of helping to prepare for the next phase, we present an eight-point program distilled from the experiences of the last several months.

Once again, please forward this and print out copies to distribute in your community!
• Eight Simple Steps [online viewing version, 195 KB]

• Eight Simple Steps [print version, 496 KB]
A two-sided flier to be folded down the middle, longways.

Cast a spell.
People in North America are already under a spell: the spell of private property, of the legitimacy of government, of hopelessness. None of these are inherently real; they derive their reality from our collective belief and activity. You have to be hypnotized indeed to believe that property is more sacred than the needs of human beings—that the decisions of the government are more legitimate than your own judgment. To break this spell, cast another. When a few people invest themselves entirely in another vision of reality, they open up space for others to invest in it as well. It doesn’t have to be realistic at first—it just has to spread until it creates the conditions of its possibility. The original call to occupy Wall Street on September 17 was an example of such a spell. What could take us further?

Find each other.
Facebook and Twitter notwithstanding, we’re more isolated today than ever. There is a fundamental difference between merely circulating information and making connections that enable people to act together. In an era when social networks are effectively mapped and contained, it’s subversive to make these connections beyond your usual social milieu; some of your friends may not have much fight in them after all, while others with goals complementary to yours might be very different from you. You can’t expect other people to leave their comfort zones unless you’re prepared to leave your own. Together we can do anything.
Preparing a revolution isn’t a matter of a radical minority building up the skills and resources to change the world; when enough of us get together, we have access to the knowledge and resources of our whole society. It’s not our job to orchestrate every aspect of the struggle, nor could we; we just have to create conduits through which subversive practices and momentum can flow. Preparation could go on endlessly, as the world goes on changing—circulation is what counts.

The secret is to really begin.
Until there’s something new happening, something that interrupts the status quo, there’s no reason for anyone to pay attention. It’s not enough to try to start a dialogue in a vacuum; for people to take the dialogue seriously, there has to be something to talk about. Don’t just chant that another world is possible; manifest it, so everyone who might believe in it can. Don’t just talk about abolishing capitalism; pick a pressure point, have a go at it, and see who joins in. Build the will.
Nowadays most of us don’t know our own strength. We’re not used to relying on our own capabilities; we assume we can always be defeated. Most of the strength of those who hold power is founded on this defeatism. But a little courage can be infectious, and once people get used to wielding power together they won’t quickly give it up.

The first compromise is the last one.
Over and over, our occupations and movements are undermined one compromise at a time. Whenever we concede anything, we set a precedent that will be repeated again and again, emboldening those for whom it is more convenient for us to remain passive. If police don’t arrest us when we stand up for ourselves, it isn’t because they support us, or because we’re within our legal rights—it’s because we’ve mobilized enough social power to make them back down. Timidity, placation, and obedience only detract from this leverage. Address the 99%, not the 1%.
Demands oriented towards those in power direct the focus away from what we can do ourselves; joint action, on the other hand, empowers us and creates a space where we can weave our differences into collective strength. To put this in the language of the Occupy movement, why address demands to the 1% at the top of the capitalist pyramid, who will never share our priorities? Why not instead address proposals to the rest of the 99%, whose combined power could render the authority of the 1% meaningless?

We’ve been taught by a thousand classes, newspapers, and job interviews to present everything in the language and logic of our superiors. We must finally learn to speak each other’s languages, to make proposals that are relevant to our own needs rather than “realistic” in the framework of our rulers. This means dispensing with every conception of legitimacy we inherited from the prevailing order—not just the authority of the politicians and the courts, but also academic prestige and middle-class “common sense” and activist credentials—in favor of value systems that legitimize our voices and our resistance on our own terms.

Aim beyond the target.
Often, to accomplish small concrete objectives, we have to set our sites much higher. Conversely, it sometimes happens that we accomplish what we set out to easily enough, but have no idea what to do with the new opportunities that open up next. Every time we act, let’s act in a way that points towards the world we want and equips us to go on moving towards it. The most important thing is not whether we achieve our immediate goals, but how each engagement positions us for the next round.
more info about Crimethinc: http://www.crimethinc.com/blog/2012/02/09/eight-simple-steps-towards-revolution/
Tags: anticapitalismantiglobalizationCrimethincGlobal Civil Warglobal movementGlobal Revolution