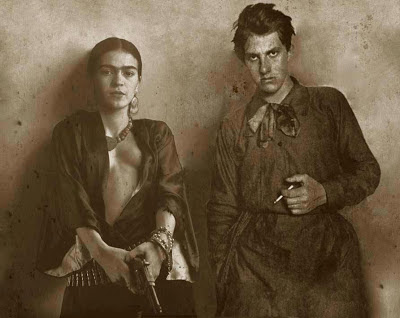 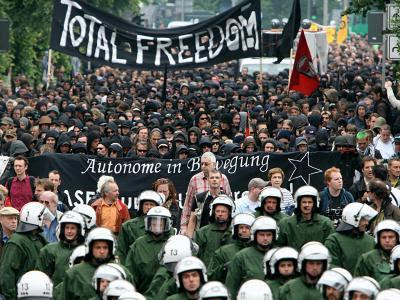 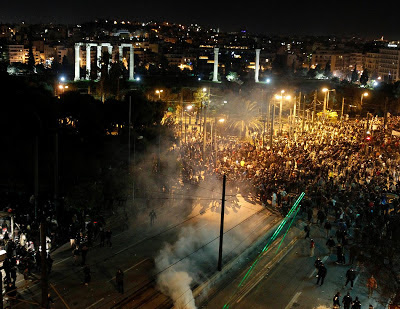 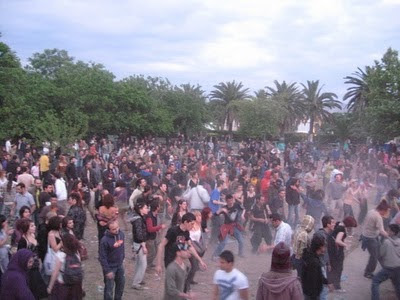 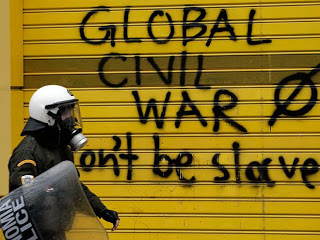 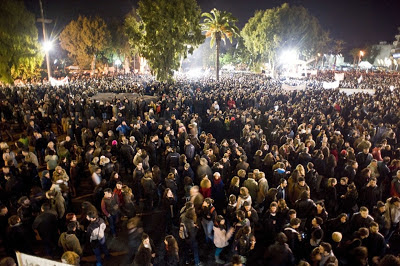 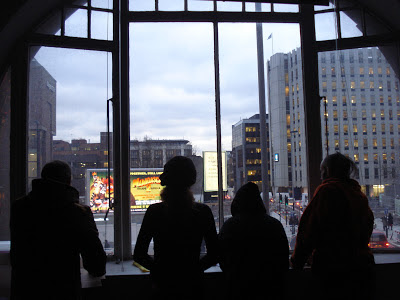 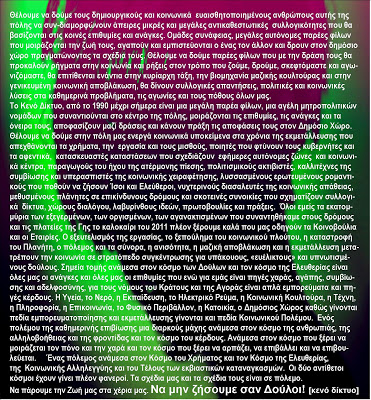 We would like to see the creative and socially aware people of this world to co-create innumerable collectives, small and large, against the establishment, based on their common needs and desires. Affinity groups and great autonomous companies of friends that share life, love and mutual trust and that act in the public space by putting in practice their own plans and visions. We would like to see companies of friends which through their actions will cause cracks in normal everyday social life and radical changes in the way we live, act, think and fight. Groups that attack against the dominant social class, against the mass culture of stupidity and the generalized social apathy, that will give direct and solid answers to the everyday problems of life, the agonies and the desires of themselves and all of us!

Void Network from 1990 until today is constituted by ever expanded companies of friends, wolf packs of metropolitan nomads that meet in the centers of their cities, sharing their desires, their needs and their dreams, making decisions together and making these decisions come true in the public space, all across the world. During these years of intensified exploitation we want to see everywhere on this Planet active social beings, people who hate money, work and salaries, poets of action that spit in the faces of the governors and the bosses, constructors of situations that design ephemeral autonomous zones and permanent social centers, producers of the urban sound of endless psychic pressure, cultural activists, artists of friendship, co-existence and symbiosis, defenders of social emancipation, wild romantic lovers enraged for Ecstatic Life, Total Freedom and Absolute Equality.

We want to see awaken late night walkers who will break through the general hypnosis of the masses, adventurers and ecstatic wanderers in dark streets and dangerous outskirts who will create collective networks, spaces of dialogue, underground assemblies, labyrinths of ideas, visions, plans, initiatives and actions.

All of us, the millions of enraged and revolted people who met in the squares of this world during the summer 2011, now know for good where the Parliaments and the Corporations are leading our Planet. The humiliation of obligatory work, the privatization and selling out of all common social wealth, the destruction of all Nature, the borders and wars, the social / cultural / political and economic inequality, the massive stupefaction and exploitation are turning this Planet into a massive concentration camp for obedient, “precarious” and hypnotized slaves.

The fields of conflict between Enslavement and Freedom are our very needs and desires, all the things that–even though for us they are a source of enjoyment and love, sharing and symbiotic coexistence–for the Laws of the State and the Market are merchandise and sources of profit. Our Health, our Water, our Education, our Electricity, our Social Cultures, our Arts and Sciences, our Information and Communications, our Natural Environments, our Houses and our Public Spaces, as they become fields of commercialization and exploitation they become also fields of Social War!
A war of constant struggle for surviving, a war between the world of profit and the worlds of humanity, a war that destroys care and mutual aid, a war between a world that knows to share pain and happiness and a world that knows only to steal, manipulate, enforce and exploit. This is a Global War between the “World of Money” and our own “Common Free World” and it is taking place at the same moment everywhere on Planet Earth.
The two opposite worlds are now obvious to everybody.
Our plans and their plans are at War. A Global Civil War!

WE HAVE TO TAKE OUR LIFE BACK INTO OUR HANDS!

WE SHOULD NOT LIVE LIKE SLAVES!
WE SHOULD START
GLOBAL REVOLUTION!