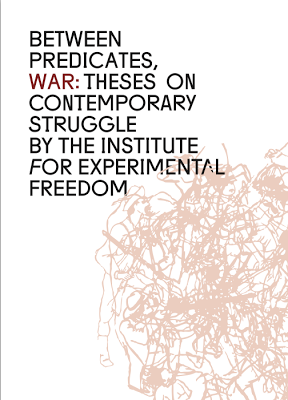 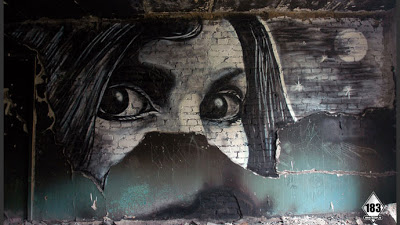 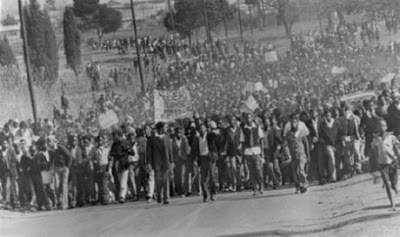 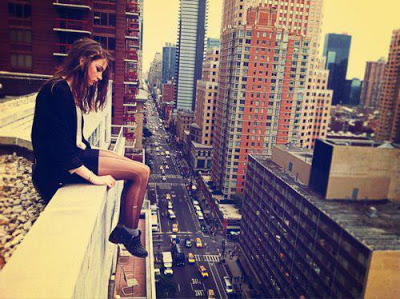 “To great writers, finished works weigh lighter than those fragments on which they labor their entire lives”
W. Benjamin

The Institute for Experimental Freedom is proud to announce the release of Between Predicates, War: Theses on Contemporary Struggle. Almost two years in the making, Between Predicates, War is a fragmented collection of theses on our tumultuous situation. From Egypt to the US, Greece to the UK, contemporary struggle announces a revolt against government. These theses draw a line connecting the forces at play, examine their parodic language, affective practices and radically self-annihilating tactics. At the threshold of our epoch and at our phase of self-governance, the events unfolding rub up against the meaning of autonomy, and in doing so ask the question, “What does it mean to live a life?” This uneasy question—and this decade of experiments aimed at answering it—anticipate the formation of a real force. What grew rhizomatically—in subterranean practices of sharing—between anti-globalization and radical environmentalism, between riots against the democratic police and irruptions of occupied spaces, burst through into the open and unpredictable air of the now. At our particular moment there is a chance that—from ancient Athenian democracy to our refined economy of subjectivation techniques—the paradigm of government may come to close.
As we wrote in Politics is Not a Banana, we have no illusions of leading a charge—and furthermore, that’s the wrong way to think about the situation. We simply want to understand our conditions, and act accordingly. With humility, a healthy sense of the humors, and the passion, we offer this text as another chapter in this project.
Between Predicates, War: Theses on Contemporary Struggle is a pocket book, of a 100 or so pages, designed with care and finesse, available from LBC Books, or directly from the Institute.

“Contemporary struggle” is our way to conceptualize what links the events of our epoch—events that cannot be defined as social movements or categorized within leftist conceptions of reform and revolution. Events are the common form that struggles take after the collapse of the historical subject and the zone of the social. We define contemporary struggle as a vast set of heterogeneous practices of revolt that appear to have everythingas their object; that is to say, events whose antagonisms are not directed against the state or capitalism per se but against techniques of government, against the productive power of government. Perhaps we will be reproached for reducing the specificity of all the movements of the past decade. However, the velocity with which struggles since the Greek uprising of ’08 have moved from intelligible anger over a collectively perceived injustice to celebratory or revolutionary situations, reveals that they are irreducibly revolts against the paradigm of government.
Government no longer sits in a closed chamber of educated men; it acts through each of us and through every apparatus that orients us and amplifies our senses in a particular direction. Government doesn’t just repress, it produces a distributed multiplication of governable subjectivities. Contemporary struggle resists, flees, and attacks being produced as a subject, appearing in the space between one coherent subjectivity and another.
Because it appears in the space between subjectivities, contemporary struggle—consciously or not—contests the meaning of autonomy. Capitalism has done away with the social as a foundation to human life, leaving the individual as self-entrepreneur to develop solutions to the crises of baseless existence. If social media appears on the theater of culture and politics this is because economic life demands that individuals collaborate on problem-solving. In order to develop itself in harmony with the economy, the individual is allocated the self, as the vehicle and instrument of freedom. It is given the space to think freely, go against the rules, and open doors of creativity—if only to eliminate flaws in the flows of the economy. Government needs subjects to self-govern because principles no longer reign with any authority; the economy needs subjects to self-manage because technology and ecology present fatal limits to its rhythm of expansion. However, when struggles originate in an open field devoid of authoritative principles, the desired affects of self-management sometimes fail to materialize, and in turn the space between coherency, contingency, and predicates can appear more hospitable than the generalized hostilities of economic life. Contemporary struggle locates the space of autonomy as a potential for a different way of living, and holds on for as long as it can.
Contemporary struggle reveals the limits of language. The grammar of justice, democracy, and equality could limit past movements because these terms were situated in a meaningful discourse—that of the enemy. Today, these words and their institutions are empty. What is perceived as logical inconsistency by political pundits is precisely the plane of consistency where a new language is being constructed. The parodic, ironic, and absurd character of today’s movements’ discursive promiscuity, irrational application of language, and use of memes reveal a new language coming into being.
Contemporary struggle loves/hates technology. It’s no surprise that the same mobile apparatuses we are required to buy to integrate our lives into the flows of the economy—smart phones, laptops, and tablets—are the media protagonists of the turbulent present.. However, the use of technology by today’s uprisings is no mere affirmation, even in the “Free Information” movement. From hacking to instagram flashmobs, from social networking an occupation to manipulating attention spans, contemporary struggle renders technological apparatuses inoperative in their proper form.
Contemporary struggle will produce the basis for either generalized ungovernability or a more horrific form of government. Social movements from the ’60s to the late ’90s created the conditions for general self-management; the most radical horizon they could perceive was a world democratically administrated and without work as production. The social movements anticipated the distribution of racial, gender, and sexual subjectivities, freedom as choice, and cybernetics. Today their demands reflect back at us in so many commodities, so many techniques of government, so many empty environments affectively managed by food and retail attendants. Today’s revolt could give way to our dreams or our nightmares.

…
Available for mail order at LBC Books, and at the Bay Area Anarchist Book Fair.
PDF for viewing here!