The word genocide is simple enough to understand, whether in Nazi Germany, Rwanda, Bosnia, Palestine, Pol Pot’s Cambodia or in West Papua.

The stories and intent are the same, a policy to annihilate the people considered the enemy of those in authority. Describing the horrifying methods used in these countries to eliminate people by state-sponsored activity is mind-boggling.

The genocidal activities of the colonial government of Indonesia against the people of West Papua is benign to the level of subjugation and will take time to achieve maximum effect but will produce the same result, the obliteration of the Papuan people.

The program is called Operasi Tumpas or Operation Annihilation. Spearheaded by the military, it is an operation of total obliteration of not only the people but also the resources that sustain their existence as a social unit. In the long run these methods will alter or destroy the social infrastructures that maintain the existence of the people.

The current military operations in Nduga District in the Highlands of West Papua (West New Guinea) is yet another “tumpas” because there have been many during the past 57 years. 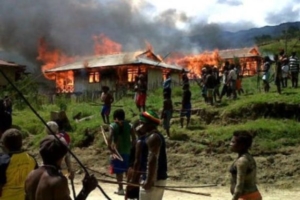 Whenever an area is declared a DOM (an area of military operation) no one, not even family members and churches are allowed to enter the area to deliver humanitarian assistance. It is strictly off limits to international contact.

The people have grown used to this cycle of military operations. That is why whenever it happens the whole population abandons their villages to the safety of the cold mountains and the jungle. They move with full knowledge that when it is safe to return there will be nothing left for them to return to. Their homes, churches, schools, clinics, including crops and animals will have been destroyed. While in hiding, exposed to the elements, many of their members, especially the young and the old, will die from exposure and malnutrition.

Military operations are a major factor, but there are other contributing factors, such as colonial settlers called transmigrasi. They arrive every week in their thousands, facilitated by the authorities to occupy traditional lands and marginalise Papuan owners.

Other contributing factors include poor health and less education. The people have demanded improvement in these areas but instead the government has put infrastructure, including road construction, as its priority to mainly benefit its military operations and colonial settlements.

Permanent military operations have been Indonesia’s legacy in West Papua for years and are the reason why the international media is banned from the territory. Direct requests for fact finding missions by the Pacific Islands Forum and the Melanesian Spearhead Group have been flatly denied for this very reason.

Calls for Indonesia to end human rights violations by the United Nations Human Rights Council and major international agencies such as Amnesty International, the Red Cross, World Council of Churches, Franciscan International and others, including governments, have all been ignored. Meanwhile human right abuses continue to be more devastating than ever, with the use of chemical weapons. 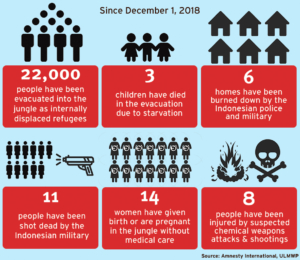 It is well established that there is an undeclared war of resistance against Indonesian occupying forces.

The indiscriminate use of chemical weapons dropped from helicopter gunships against fleeing Villagers of the Nduga region in the Highlands of West Papua indicates the intensity of the war. The colonial army is using these banned weapons in desperation to terrorise the Papuans and reduce resistance. The tactics are well rehearsed. If the resistance does not create an incident the army will produce one as a pretext to launch a major operation.

Such pretexts have included, firstly, the death of so-called “civilians”. It is well-known that the TNI (Indonesian National Armed Forces) has long been involved in businesses in West Papua. This is part of their strategy to monitor and defeat the OPM (West Papua Independence Movement). Dressing as civilians is part of their concealed strategy to secure success.

Secondly, the people in the Nduga area are opposed to the decision by Indonesian President Joko Widodo to grant a permit to a TNI contractor to build the Trans Papua Highway. The highway will run through Nduga District — a stronghold of the TPN (West Papuan Liberation Army).

Tensions have been high since they entered the area and conflict of this magnitude was bound to happen. In late November the contractor was advised in writing by the regional commander of the TPN to cease activities on December 1 [the anniversary of the first raising of West Papua’s flag of independence, the Morning Star] and advising that employees should not interfere with the activities of people celebrating December 1, including the flag-raising ceremony.

In spite of this advice, a company employee made a video of the flag-raising ceremony — an action considered very serious by the TPN. The people asked him to stop and even followed him to their camp demanding that he delete the video, but he refused to do so.

The action by TPN troops on December 2 was a surprise to the people of Nduga but they accepted the rationale of self-defence by the TPN, because the video would have been used by the military as evidence against the people. The making of the video proved beyond doubt that employees of the company are members of the military. Some even carry weapons.

Tensions in this district have remained high ever since the massacre in Mapenduma in 1996. In the Mapenduma case, TPN commander Kelly Kwalik reached agreement with church leaders to release hostages, including foreigners, which were being held by his group. The people came together to witness a traditional ceremony on the day of the release. People, especially children, gathered excitedly to welcome the Red Cross helicopter that they thought would be bringing an official to receive the hostages. But there was no official, instead the military arrived with machine guns blazing, mowing down unsuspecting women and children. The incident was documented in a 1999 ABC Four Corners report, “Blood on the Cross”.

Repressive military operations are a government policy of annihilation. Whether armed or not, Papuans must be eliminated.

UK-based Amnesty International documented in its 2018 report, Don’t bother, just let him die: Killing with impunity in Papua; the abuses, arbitrary arrests and unlawful killings that have been carried out by members of the Indonesian military against the people of West Papua. This has been going on for the past 57 years and with the current instructions issued by the president, who is the highest commander of the armed forces of Indonesia, we are expecting the worst.

[Rex Ramakiek is the Secretary of the United Liberation Movement for West Papua.]

WEST PAPUA: THE GENOCIDE THAT IS BEING IGNORED BY THE WORLD 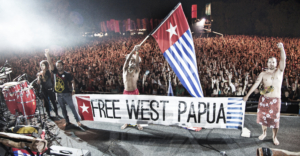 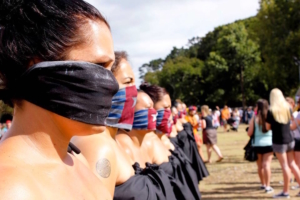 If you need evidence that politicians and the mainstream media pick and choose which oppressive conflicts to cover in order to further geopolitical ambitions, you need only Google “West Papua.”

Ever heard of it? Have you ever been sitting at home watching CNN, BBC, or Fox News and heard the news anchor mention West Papua?

It’s strange that this oppression receives little to no media coverage considering a recent fact-finding mission conducted by the Brisbane Archdiocese’s Catholic Justice and Peace Commission reported that West Papua was experiencing a “slow motion genocide.” The report warned West Papua’s indigenous population is at risk of becoming “an anthropological museum exhibit of a bygone culture.”

When you learn what fuels the conflict in West Papua, it becomes clear why this issue receives hardly a blink from our peace-loving politicians and media establishment.

West Papua is home to one of the world’s largest gold mines (and third largest copper mine), known as the Grasberg Mine. Grasberg is majority-owned by the American mining firm Freeport McMoRan. It has reserves worth an estimated $100 billion, and the company is Indonesia’s biggest taxpayer.

Money and geopolitics usually beat out human rights. Since the Suharto dictatorship of Indonesia annexed West Papua in a 1969 U.N. referendum – largely viewed as a land grab – an estimated 500,000 West Papuans have been killed fighting to achieve independence. 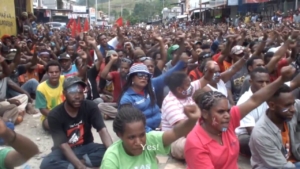 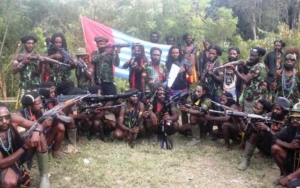 Freeport McMoRan was given rights to Grasberg when the Indonesian government signed the right to extract mineral wealth from the site in 1967. In order to preserve this quite literal gold mine, the Indonesian military uses brute force against the local indigenous population. Benny Wenda, a native Papuan who has campaigned his whole life for independence, details the kinds of experiences the local population has endured at the hands of the Indonesian military:

“Now, every morning on the way to their gardens, Benny and his mother and aunties would be stopped and checked by Indonesian soldiers. Often the soldiers would force the women to wash themselves in the river before brutally raping them in front of their children. Many young women, including three of Benny’s aunties, died in the jungle from the trauma and injuries inflicted during these attacks, which often involved genital mutilation. Every day Papuan women had to report to the military post to provide food from their gardens, and to clean and cook for the soldiers. Violence, racism and enforced subservience became part of daily routine.” [emphasis added]

Australia, a country with a cozy, albeit confusing relationship with Indonesia, plays its part in destroying any decent discussion on this horrifying issue. In November of last year, the Indonesian government asked Australia to put pressure on the Pacific nations who have begun to show support for West Papua’s campaign for independence, effectively stopping these tiny islands from “interfering” in Indonesia’s affairs. Australia has been quite complicit in this issue to date, even providing the Indonesian military with the equipment necessary to wreak havoc on the local population.

Lately, however, there has been some progress. The two countries suspended military ties after an Indonesian military official found “offensive” material at an Australian military base, including homework that suggested West Papua was part of Melanesia and should be given independence.

Regardless, Papua has the highest poverty rate in Indonesia. It is nearly three times the national average. It also has the highest infant, child, and maternal mortality rates in Indonesia, as well as the worst health indicators and the lowest literacy rates.

Imagine how greatly the West Papuans could improve their standard of living if they were allowed to control their own resources without the Indonesian military forcibly destroying their lives.

Meanwhile, an American mining company continues to make hundreds of billions of dollars at the expense of innocent natives. 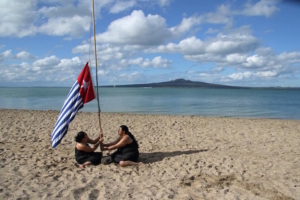