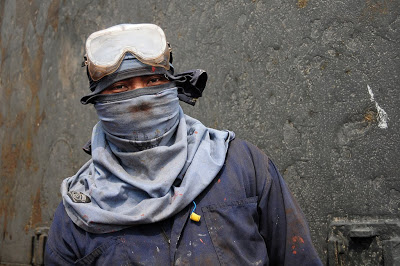 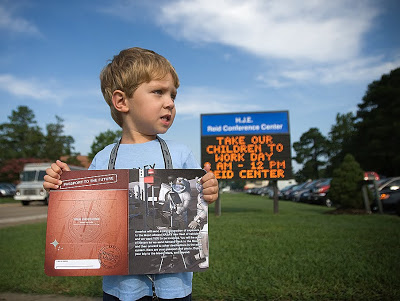 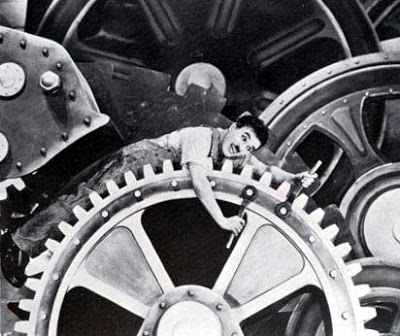 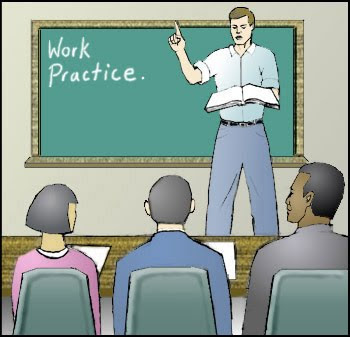 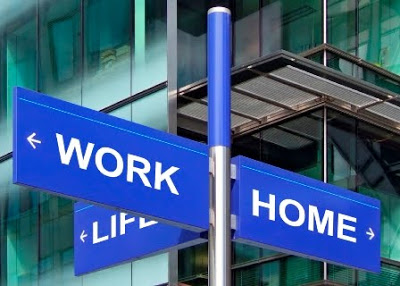 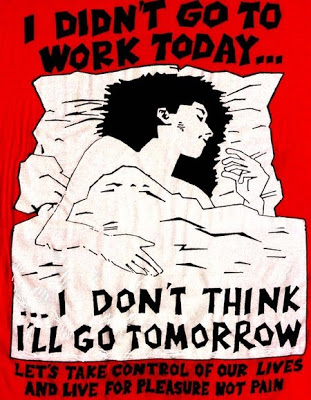 The Psychopathology Of Work
by Penelope Rosemont

Depersonalization and alienation from our deepest desires is implanted during childhood via school, church, movies, and TV, and soon reaches the point where an individual’s desire is not only a net of contradictions, but also a commodity like all the others. “True life” always seems to be just a bit beyond what a weekly paycheck and credit card can afford, and is thus indefinitely postponed. And each postponement contributes to the reproduction of a social system that practically everyone who is not a multimillionaire or a masochist has come to loathe.

That is the problem facing us all: How to break the pattern of work – of week-to-week slavery, that habit of habits, that addiction of addictions; how to detach ourselves from the grip of Self-Defeating Illusions For Sale, Inc., a.k.a, the corporate consumer State.

The systematic suppression of a person’s real desires – and that is largely what work consists of – is exacerbated by capitalism’s incessant manipulation of artificial desires, “as advertised.” This gives daily life the character of mass neurosis, with increasingly frequent psychotic episodes. To relieve the all-embracing boredom of daily life, society offers an endless array of distractions and stupefactions, most of them “available at a store near you”. The trouble is, these distractions and stupefactions, legal or illegal, soon become part of the boredom, for they satisfy no authentic desire.

When the news reports horrible crimes committed by children or teenagers trying to be satanists, or superheroes, or terrorists, or just “bad guys”, we can be sure that these kids lived lives of intolerable dullness, that they were so isolated from their own desires and from the larger society that they didn’t even know how or where to look for something different, or how to rebel in such a way that it might actually make a difference. Instead, they picked up some trashy notions from bible school, Hollywood and TV which promised a few minutes of meaningless “excitement” followed by lots of publicity – also meaningless. Each time something like this happens we hear cries to “monitor” films more closely, and to ban “violence” on TV. Rarely, however, does anyone criticize the Bible or the Christian churches, despite the fact that Christianity – by far the bloodiest of the “world’s great religions” – is far more to be blamed. Similarly, one rarely hears criticism of the armed forces – a gang of professional killers whose influence on children cannot be anything other than baleful.
And even less often does one encounter criticism of another intrinsically violent institution: the nuclear family. Indeed, at this late date in human history, this relic of patriarchy is still held up as some sort of ideal. Replacing the extended family as we know it today is an invention of the nineteenth century. Constructed by white bourgeois Europeans to meet the needs of expanding industrialization, it reflects capitalism’s model of the “chain of command”. It continues the sanction of male supremacy as a time-honored tradition dating back to a mandate of God, no less. In the nuclear family, he works at a job, and she works in the home (and increasingly also at a job). As for the children, they are the family’s private property, and remain so for years after they reach bilogical maturity.

Children too learn to work, or at least how to suffer boredom. From the earliest age they are taught to obey orders. School and church teach them the necessity of going to and staying at a particular place for a prolonged period, even when they would rather be anywhere else. All the classic parental admonitions – “Sit still!”, “Do what I tell you!”, “Don’t talk back!”, “Stop behaving like a bunch of wild Indians!” – are part of the education of the well-behaved, uncomplaining wage-slave…
The world today is confronted by greater, more earth-shaking, more life-threatening problems than ever before: wars all over, massive pollution, global warming, the return of slavery, white supremacy, oppression of women, ecological disaster, neocolonialism, state terrorism, the prison industry, genocide, cancer, AIDS, the traffic death-toll, zenophobia, pesticides, genetic engineering – the list goes on and on. Ceaselessly bombarded by news reports and sound bytes of one catastrophe after another, most people have no idea what to do, and laps into paralysis. On the ideological front, this widespread passivity, itself a major social problem, is maintained by Andre Breton called miserabilism, the cynical rationalization of misery, suffering and corruption – the dominant ideology of Power in our time.
Every hour, moreover, countless billions are spent on propaganda, advertising and other mystifications to sustain the delusion that the crisis-strewn society we live in today is the best and only one possible.
What is most important to grasp is that work is at the center of all these problems. It is work that keeps the whole miserabilist system going. Without work, the death-dealing juggernaut that proclaims itself the “free market” would grind to a halt. “Free market” means freedom for Capital, and unfreedom for those who work. Until the problem of work is solved – that is, until work is abolished – all other problems will not only remain, but will keep getting worse…In a world too busy to live, work itself has become toxic, a form of “digging your own grave”.

Renewed scarcities and engineered economic crises notwithstanding, society today ahs the capacity to reduce work to a tiny fraction of what it is now, while continuing to meet all human needs. It is obvious that if people really want paradise on Earth, they can have it – practically overnight. Of course, they will have to overcome the immense and multinational “false consciousness” industry, which works very hard to make sure that very few working people know what they really want…
Work kills the spirit, damages the body, insults the mind, keeps everyone confused and demoralized, distracts its victims from all the things that really matter in life…Our struggle calls for labor organizers of a new kind…To bring about the meltdown of miserabilism, we need awakeners of latent desires, fomentors of marvelous humour, stimulators of ardent dreams, provokers of the deepest possible yearning for a life of poetic adventure.

A new study finds an alarming rise in a novel form of psychological distress. Call it