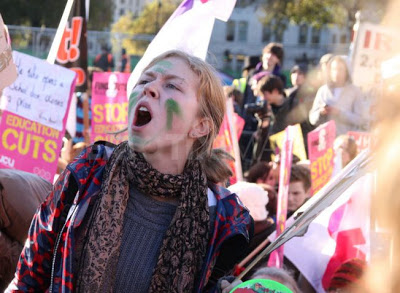 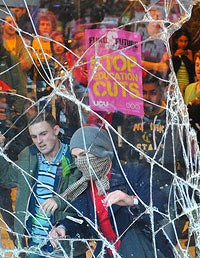 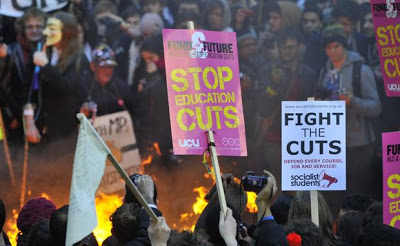 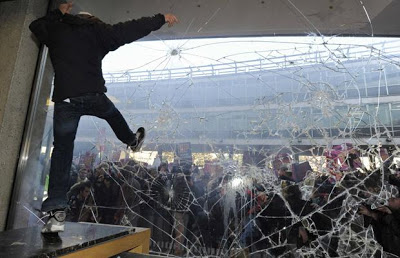 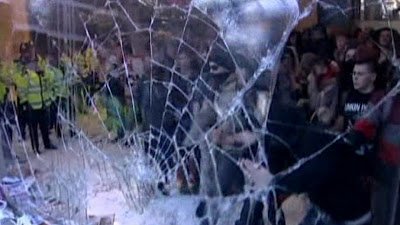 Statement from the occupation of Sussex University:

This afternoon, over 170 students occupied the lecture theatre in the Fulton building at the University of Sussex in protest of the trebling of tuition fees and the attack on our education system.
In light of Wednesday’s demonstration, which saw 52,000 people come out in opposition to the government’s proposed cuts to education and raising of fees, we feel it is necessary for further action to consolidate the efforts made so far and push on in the opposition to these ideologically motivated cuts to both education specifically and public services as a whole.
We reject the notion that these cuts are necessary or for the benefit of society. There are viable alternatives which are not being explored. While the government has suggested that ‘we are all in this together’, we completely reject this and are insulted that these cuts are being pushed through alongside reductions in corporate tax. We feel these cuts are targeting those who are most vulnerable in our society.
Furthermore, not only are these cuts damaging our current education, but are changing the face of the education system as we know it. The hole in finances left by government cuts will inevitably be filled by private interest. This marketization of education will destroy the prospect of free and critical academic enquiry, on which universities should be based. The trebling of tuition fees will further exclude another swathe of society and make university accessible only to the rich.
We reject the media manipulation of the occupation of Millbank. The cost of the damage to 30 Millbank is less than insignificant when set against the damage of lost livelihoods and destruction of public services for future generations.
This occupation recognises that Aaron Porter’s statements condemning the demonstration are counter-productive and serve only to divide and segregate the movement. We are disappointed that, as a national representative of students, Aaron Porter’s statements have detracted from the real issue at hand by focusing on the events at Millbank Tower.
We believe that this Tory led coalition government has no mandate for lifting the cap on tuition fees. Nick Clegg has openly manipulated student voters in his campaign for election, and following the recent exposure of plans to drop his pledge to reject any rise in tuition fees, this occupation condemns his dishonesty and undemocratic methods.
Education is a right, not a privilege.
– We demand the University of Sussex management makes a statement condemning all cuts to higher education and rise in tuition fees
– We are opposed to all cuts to public services
– We oppose a rise in tuition fees
– We call for solidarity and support for those arrested or victimised on Wednesday’s demonstration
– We stand in solidarity with others taking action, both nationally and internationally, in the fight against austerity measures.
– We call for all other university, college and school students and staff to strike and occupy in defence of the future of our education system, and to participate in the national day of action on the 24th November 2010.

please print in A3 black&white photocopy this
poster and spread it to your schools, universities and
local social centers


Statement of Solidarity to the U.K. Student struggle
VOID NETWORK // ATHENS GREECE
http://voidnetwork.blogspot.com
All we,…
the students, the working people, the unemployed and the lazy ones, girls and boys from Void Network / Athens Greece section we express our solidarity to the occupation of Sussex university and to all people that will participate in this and all other actions until the great demonstration of 24 November and beyond that….
.
The news coming from U.K. about the student’s struggle are making us all here in Athens having great hope about the arising of critical mind and the radicalization of a whole generation in all U.K…. Our thoughts and hearts are there with you…
We believe that Now(!) is the best moment for all students to deny their position in the machine, to break the process of reproduction of themselves as slaves to the economic system, to destroy the hegemonism, ignorance, apathy and racistic domination of the scientific, academic and economic elite of this planet, to create the conditions of constant free sharing of global knowledge and free distribution of the productions of it, to bring their emancipatory understandings to the center of the city, at the center of the political agenda of their society, to unite their struggle with all other people in struggle (the older and the younger ones, the immigrants and the family people, the retired ones and the workers, the excluded ones and the homeless ones, the lovers, the travelers, the ravers, the squatters, the freaks and the romantic ones, the employed, the unemployed and the lazy ones, the angry ones and the disappointed ones, the destructive ones and the creative ones).
Now is the time to create a new public discourse that includes all of us, that starts from the anxiety, the fear and the misery of the every-day student life and expands to the anxiety, the fear and the misery of all the ages, all the society.
Capitalism and State Democracy are destruction machines. Our blood and our minds are the powers of this machine. Now all of us, in one way or the other we know that this machine is bringing life on planet earth in extinction.
Our Life is the Death of the machine. Life of the machine is our Death.
Our best moments are these ones when we are together fighting against the machine. In the universities, in the working places, in the city center, in the forests, against the parliament, the royal palaces, the industries, the super markets and the luxury restaurants, in the T.V. stations and infront of police stations, prisons, and courthouses.
Now…you can see us…
We are all together…And, when we fight we are fighting for our lives….
Stay awake in the deep night of the western civilization…We become more and more millions on this planet night after night…and We Are Ready to Fight Back!
VOID NETWORK // ATHENS GREECE
http://voidnetwork.blogspot.com
Tags: students fees riots U.K.