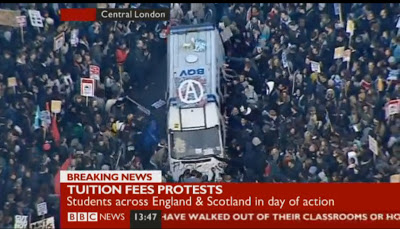 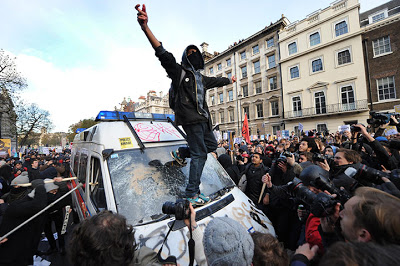 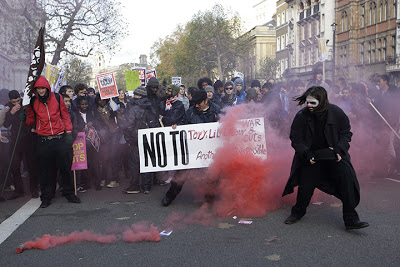 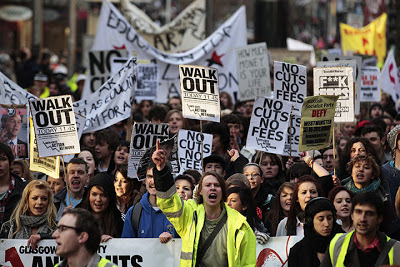 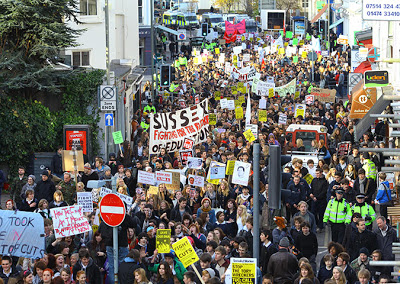 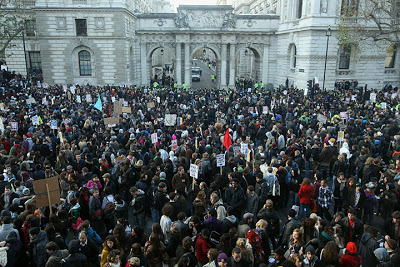 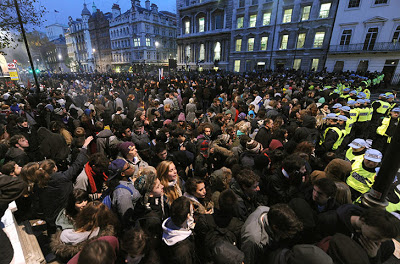 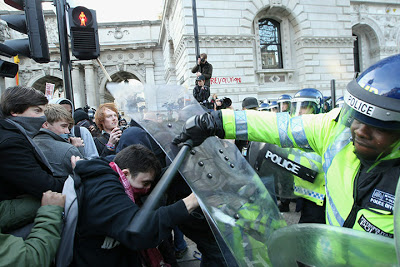 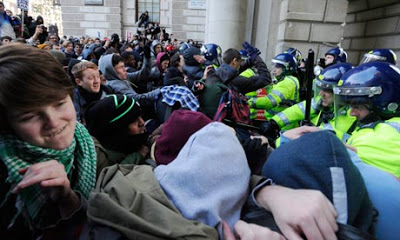 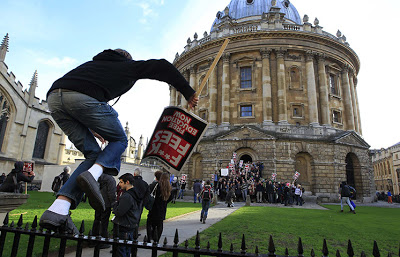 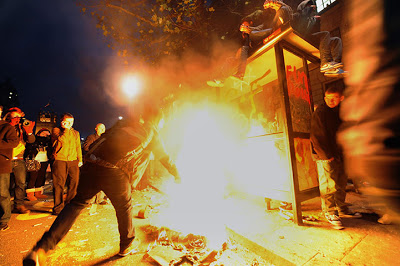 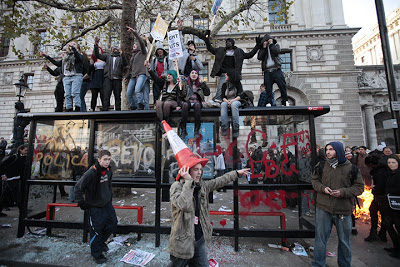 Void Network
[Theory, Utopia, Empathy, Ephemeral Arts]
http://voidnetwork.blogspot.com/
More than 150.000 students abandoned their classrooms in 24th November 2010 in U.K. participating in occupations of universities, demonstrations, sit-ins and teach-ins all over U.K. making it the biggest wave of student protests and occupations in a generation.


Round-up of some of the actions

In Bristol, several thousand students, along with teachers and lecturers, held a protest in central Bristol. Large numbers were able to break out of the police kettle and some went on to occupy Bristol University Student Union building. The Students Union stands accused of denying its own members the space and opportunity to discuss the proposed cuts to higher education as well as failing to take a stance on the issue. Earlier in the week, the main building of the Frenchay campus of the University of Western England was also occupied. Cops in Bristol were spotted here and here during the protests on Wednesday without their numbers displayed.
Hadn’t we been told this would never happen again?


In London, around 5,000 people demonstrated in Trafalgar Square before heading down Whitehall, where the progress of the march was blocked by riot vans. Police moved in to create a kettle of around 3,000 people, herding youngsters out of McDonald’s and into the kettle on the way. There were maybe 2,000 others outside the kettle and in the surrounding area. Skirmishes took place between police and some of the kettled protesters, fires were lit and an abandoned police van, which some have said amounted to entrapment, trashed. Some of those kettled were still being held late into the evening, and mounted police charged peaceful crowds which included children. There were reports of 32 arrests and 17 injuries, including two police officers. During the day, occupations were reported at Royal Holloway, UCL, South Bank and Roehampton. At the School of Oriental and African Studies (SOAS), already occupied for several days, management attempted to get an injunction to remove the students on Wednesday, while many were at the London protests. The High Court allowed an adjournment until Thursday to allow students time to seek legal advice, with the Judge dismissing management claims that the occupation might become a focal point for the wider demonstrations taking place in London.


In Oxford, after a march which began at 1pm at Carfax tower, a group of students and Oxford residents, together with a sound system, took the authorities by surprise and occupied the iconic Radcliffe Camera, part of the Bodleian Library, with reports of over 100 inside. The authorities had been preventing others from joining the occupation during the day, but a group managed to gain entry by means of critical mass in the early hours of Thursday morning to swell numbers. A statement issued on Thursday declared the occupiers’ intention to open the ‘Rad Cam’ as a ‘free space for mutual education, in resistance to the neoliberalisation of higher education announced by the coalition government’ and to stay there indefinitely.


In Edinburgh, a protest by around 300 students, starting in Bristo Square, joined up with another by 50 workers and benefit claimants outside the offices of A4E to create a march down Lothian Road and on to the Lib-Dem HQ where there was a sit down protest. The march then continued through Edinburgh, with sit-down protests on the roads as it went. There was a brief occupation of the University’s Registry Offices before hundreds took possession of Appleton Tower Lecture Theatre 2, with a plan to remain in occupation until demands are met. Early on Thursday morning, the Lib-Dem HQ was targeted again: locks were glued and the handles chained, with a message that ‘Lib Dem Lies are Locking us out of our Education.’


In Sheffield, there was a demonstration in the city centre, following which students occupied Sheffield University Hicks Building. During the night, the occupiers reported that security officers were denying undergraduate Astronomy students access to the roof to observe the night sky, and that postgraduates weren’t being allowed in to do their work. The occupiers have expressed their intention to negotiate with tutors to allow all lectures to go ahead. On Thursday, security guards mounted a failed attempt to evict the students forcibly after another group managed to join the occupation, then set off fire alarms to force the evacuation of the building on health and safety grounds. The students have now regrouped and are occupying the space outside the Vice-Chancellor’s office in Firth Court.


Brighton students held a lively demo, with brief occupations of the Council Tax offices, a Vodaphone store and reported looting of a chain store. Several police lines were broken and although some groups were kettled, others managed to escape. Pavillion Parade building, part of the University, was occupied by about 70 students. There were reports of police using batons against young students, many of whom were under 18, as well as threatening them with pepper spray. At least two arrests were reported.


In Leeds, a thousand students walked out, with the demonstration being joined by many school students.


In Cardiff, 200-300 students stormed the main building of Cardiff University and laid siege to the Vice-Chancellor’s office before occupying the Shandon Lecture Theatre. There are currently around 50 students still occupying this space, teach-ins have been taking place, a local co-operative has been supplying food and the students have announced their intention to stay.


In Birmingham, over 30 students occupied the Aston Webb building at the University of Birmingham, with others prevented by security guards from gaining entry. The occupiers have issued a list of demands.


In Manchester, police violence erupted during otherwise peaceful protests. There were reports of four arrests. Roscoe Building of the University of Manchester has been occupied and the occupiers have issued an invitation to others to join them.


In Lancaster, sixth formers and school students led the action, massing at the Town Hall and marching through town, with some university students lending their support and sounds.


In Cambridge, several hundred students took to the streets and then occupied the front lawn of Cambridge University’s Senate House, with baton-wielding cops occupying the House itself to prevent the students from doing so. There were reports of two arrests. A decision was made after several hours to leave the occupied lawn en masse.


Warwick students occupied a campus conference hall, calling on the university to take steps to resist the cuts. The occupation ended on Thursday morning, in large part because of obstructive behaviour by the university.


In Newcastle, 60 students peacefully occupied the Fine Arts building of Newcastle University after a demonstration and march involving thousands of school, college and uni students. Eldon square shopping centre was taken by storm at one point, by hundreds of students with a sound system.


In Plymouth, the Roland Levinsky Building of the University has been occupied since 23 November.


Students from local schools, colleges and the University in Southampton walked out, many attending a rally at the Uni, no thanks to the Student Union, which refused to support the action, which they declared ‘too political’ as well as claiming to be worried that people might swear.


See: Lasthours for a map charting the occupations so far.


Even though the preasure from the police was strong and the efforts of corporate Mass Media to produce fear and dissapointment to the students was massive the most of the students participated in the action day and created a front against stupidity and apathy. The old game doesn’t work anymore.
As an anarchist student occupier from Sheffield university said in a recent interview:
“People, students in particular, are coming to the realisation that simply asking politicians to do something doesn’t work. The result is that they are starting to take matters into their own hands, collectively and at a grassroots level.Anarchist education workers and students are very much a part of these struggles but certainly a minority within them. The tactics – of self-management, non-hierarchy and direct action – have been adopted in many places quite spontaneously. This is, of course, far more preferable to us! It’s ultimately what we want – not a struggle controlled or led by anarchists, but one that shares our goals, tactics and principles.”


The reformist and hierarchical left tendencies inside the student struggle are not infuential, the people are using horizontal forms of assembly and decision making processes and the free mind initiatives are strong. These are the elements that can bring this strugle further: Solidarity, Commitment, Direct Action, Active Fantasy, Initiative, Horizontal Open Assembly, Direct Democracy, Non-Hierarchy and the Rejection of representatives.
The next step of the struggle is already born in the hearts of all these people of this generation. Now all of them they know that politicians are just liers and puppets to the hands of economic interests, no one from the high elite cares about them and trhey have to wait nothing from anyone else than themselves and their comrades. Now all of us we have comrades. We gave a fight together. We will continue fighting!