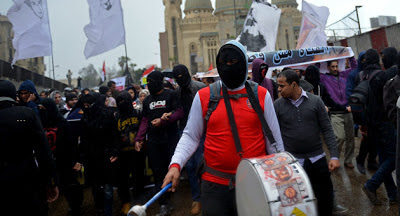 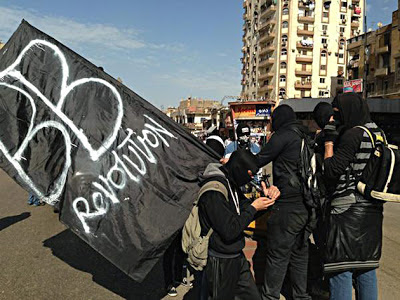 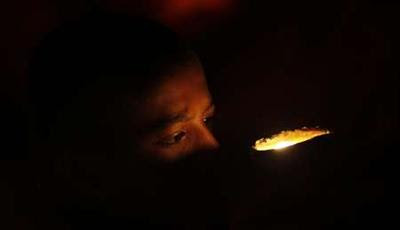 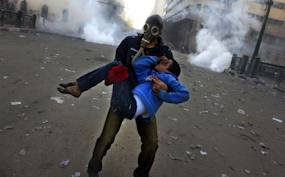 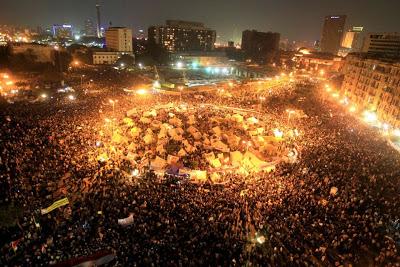 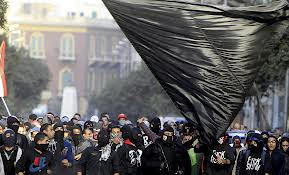 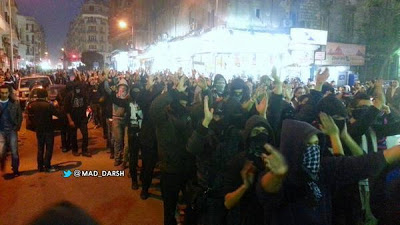 Void Network presents here, in Arabic and in English, an open letter from participants in black bloc actions in the United States to participants in the Egyptian black bloc, aimed at initiating a dialogue beyond the exchange of youtube videos. This is of interest to everyone around the world struggling for liberation, so please print and distribute widely:


The emergence of the black bloc in Egypt at this time should not surprise us as much as it surprises pacifists and authoritarians. The struggles of the 21st century will not be limited to nonviolent civil disobedience, nor to reformism; they are bound to involve open conflict with the state. Moreover, they will be increasingly international in scope and character. Whenever anyone anywhere around the world stands up for herself or himself—however awkwardly, however humbly—it sets a precedent for the next generation of resistance. Let’s rise to the occasion.


The criticisms of the black bloc in Egypt are all too familiar. Those who have more privilege and power than you accuse you of being spoiled rich kids. Those who are not willing to run the same risks accuse you of cowardice. Those who have different goals than you complain that you are not strategic. Those for whom democracy means the amplification of their own voices insist that you should submit to majority rule in order to silence you. Those who depend on foreign military aid, who bow to foreign political pressure in selling out the people of Egypt, accuse you of importing foreign tactics. You are blamed for the violence of the police, when the police are always precisely as violent as they have to be to maintain their supremacy, and their ongoing violence is only visible because you resist it. Above all, authorities of all kinds do everything they can to isolate you from others who might resist.

You strike the note—it sounds in us.

It is an honor to address you on account of your courage in the struggle still unfolding in Egypt.

For a decade and a half, we have participated in black bloc actions in the US and elsewhere around the world. Of course, we do not represent anyone or anything; the black bloc is a tactic, not a group—that is what makes it so frightening to our rulers. But on the basis of our experience with this tactic, we would like to share some of our perspectives in hopes of establishing a more explicit intercontinental dialogue.

We have already been in a kind of dialogue with you, exchanging signals of revolt across the ocean. We’ve circulated reports of your struggle here, and now we are seeing photos and videos of our actions appear in youtube collages from Egypt. But we want more dialogue than youtube collages allow. We want to be able to discuss strategy as well as tactics, and goals as well as strategy.

First and foremost: you are not alone. You are part of a struggle against oppressive power that is taking place all over the world. The same economy that is plundering Egypt wrecks our lives and land here in the US; the same networks of armed force that tear-gas you in Cairo maintain “order” in New York City. If we are to win anything in this struggle, we can only do so internationally.

It is embarrassing that it took us so long to address you in Arabic—that shows how unprepared we are for the opportunities history is offering. But that may change quickly in the coming years. It will have to.

We have gained our experience with black bloc tactics under what you might call adverse conditions—as a small minority acting against a stable power structure, without much support from the rest of society. The black bloc evolved in that context, and it is interesting to see it appear in a situation of more generalized revolt.

Indeed, the longevity of the black bloc surprises everyone; over and over it has been pronounced dead, yet it keeps coming back. This is because, like Anonymous, it expresses the spirit of our times. In an era when tremendous disparities are maintained by surveillance and policing, any meaningful movement is bound to involve anonymity and clashes with the authorities.

The black bloc is important because it gives that anonymity and antagonism a political content: it ties specific struggles against oppression to the possibility of a generalized struggle against all oppressive power. It is a coup to “brand” anonymous collective confrontation with the authorities as anarchist—this means that everyone who stands up for himself against the authorities must ask, sooner or later, what his relationship to others’ struggles is.

It is fitting that the black bloc emerged in Egypt on the two-year anniversary of an uprising that only replaced one tyranny with another. The problems caused by capitalism and government cannot be solved by a mere change of regimes. It will take a struggle from the ground up—the emergence of social formations that can defend themselves against government and capitalism. This is not a matter of addressing demands to those in power, and it is not something that can be won simply by attacking presidential palaces. It requires us to oppose the structures of domination everywhere they appear, shifting our strategy from mere protest to the assertion of another way of life.

The criticisms of the black bloc in Egypt are all too familiar to us—we have watched reactionaries read from this same script since 1999. You are blamed for the violence of the police, when the police are always precisely as violent as they have to be to maintain their supremacy, and their ongoing violence is only visible because you resist it. Those who have more privilege and power than you accuse you of being spoiled rich kids. Those who are not willing to run the same risks accuse you of cowardice. Those who have different goals than you complain that you are not strategic. Those for whom democracy means the amplification of their own voices insist that you should submit to majority rule in order to silence you. Those who depend on foreign military aid, who bow to foreign political pressure in selling out the people of Egypt, accuse you of importing foreign tactics. Above all, authorities of all kinds do everything they can to isolate you from others who might resist.

Indeed, in our experience, this is the greatest risk in using the black bloc tactic: in giving an identity to anonymity and struggle, it offers the authorities an opportunity to make an “other” out of us, to quarantine our revolt and our ideas. It is a mistake to view ourselves as separate from the rest of society. The black bloc is powerful and dangerous only so long as it remains a space of revolt that anyone can flow into—the tip of the iceberg of something much broader. Our rulers do not fear anarchists—they fear that anarchist values and practices will spread.

It is important not to impose a dichotomy between being honest about our goals and participating in movements larger than us. On one hand, we must be clear that we reject all forms of domination; if we do not, everyone will have to learn again and again how little police and the poverty they impose change from one government to the next. This is why we should not hide our values under the same vague banner of “democracy” that disguises others’ hunger for power: doing so only legitimizes the structures that will be used against us later. But at the same time, we have to maintain the openness that enables tactics and ideas to circulate. Anarchism is not an identity, it has no meaning in isolation; it is a relationship that must spread.

In the United States, anarchists have erred on both sides of this dichotomy. Often, we have served as shock troops and free labor for liberal causes, taking great risks to advance their agendas while failing to act on our own analysis. We hoped this would connect us to the rest of society, but connections that depend on us hiding our values are meaningless.

Other times, anarchists have acted as though we could accomplish our goals on our own, winding up in a private grudge match with the state that everyone else assumed had nothing to do with them. Certainly, we can’t wait for mass consensus to begin our project of revolt; we can only find others in revolt by rising up ourselves—but the point is to find others. Over and over, we’ve thought our own dreams too wild to propose, only to see other people enacting them spontaneously. In fact, the time is ripe for us to advance our proposals: capitalism is in crisis around the world, and soon billions will have to choose between totalitarianism and the kind of freedom no government can provide.

If it is true that the state cannot solve our problems, all who wish to wield its authority will discredit themselves once they assume power. The sooner all the Muslim Brotherhoods of the world associate themselves with the state the better: this will clarify things for those who do not yet understand why anyone would be an anarchist. When the opposition parties join the rulers in telling everyone to get out of the street and the streets remain full, this suggests that people are catching on. In this situation, anarchists could help turn regime change into social revolution, a full-scale transformation of everyday life.

The US government needs Egypt to have a government with whom to coordinate the resource extraction necessary for global capitalism. The black bloc scares them because it is not legible in their conception of politics—it offers no one to negotiate with. They want to bring all the political parties into “dialogue” in order to map everything in their structures of power; we want to take the struggle out of the hands of political parties entirely, establishing dialogue among people rather than with parties or governments. We seek to spread struggles in which we communicate with and inspire others directly, as you have inspired us.

We will continue this dialogue in the most meaningful way we can—by continuing to challenge the power structures here in the United States, which underpin those in Egypt and elsewhere around the world. But if any of you can send us reports from your struggles, or translate materials between English and Arabic, we would be glad to hear from you. May we meet in the streets of a stateless world.