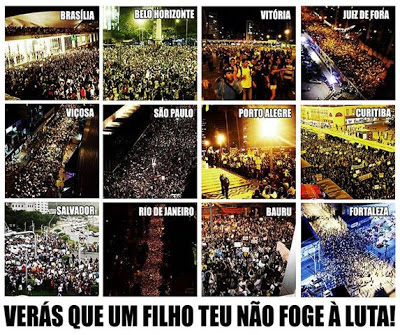 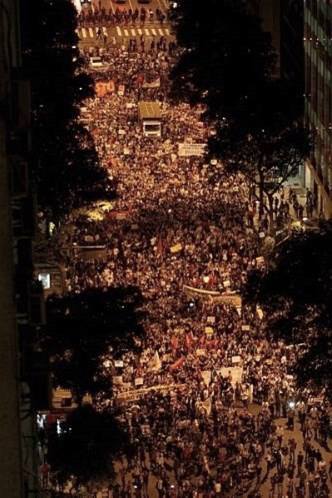 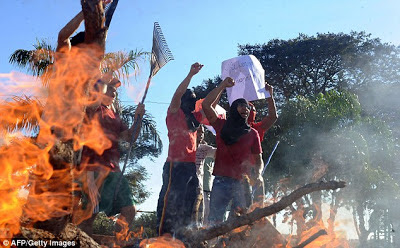 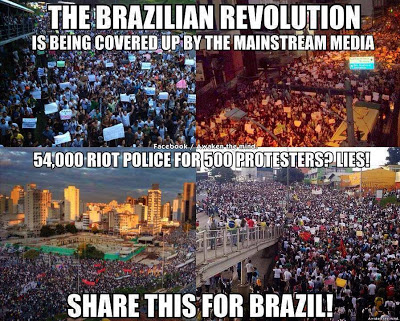 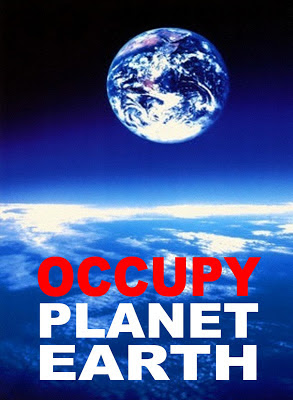 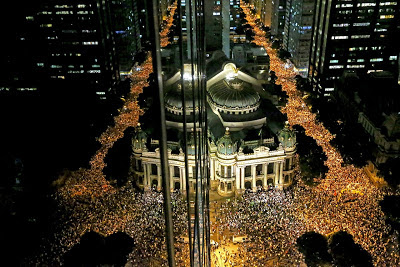 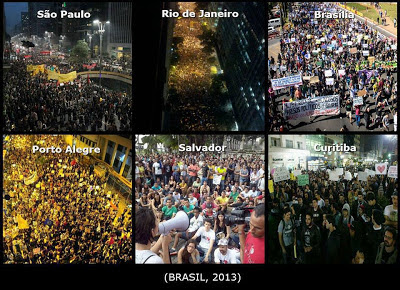 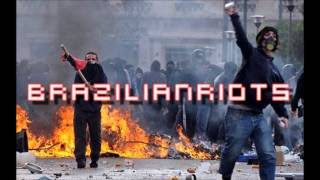 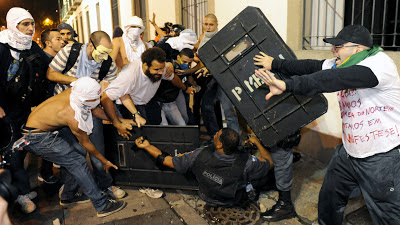 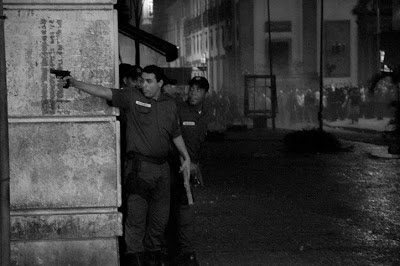 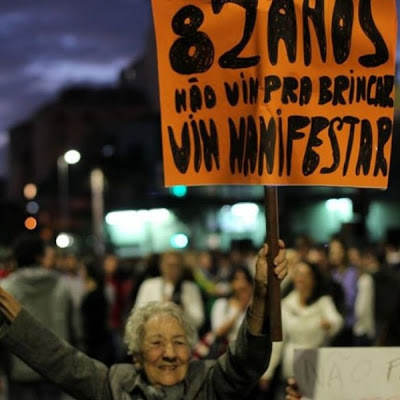 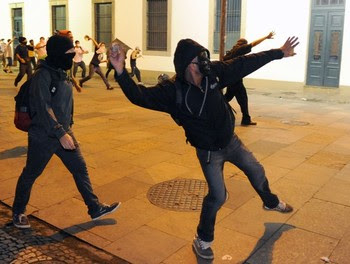 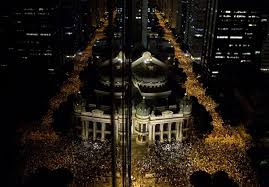 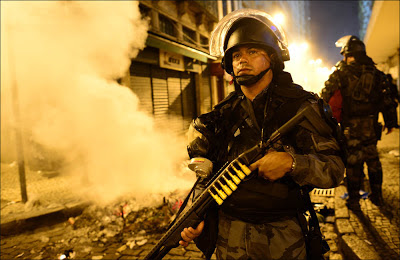 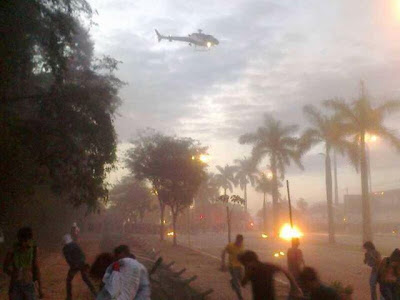 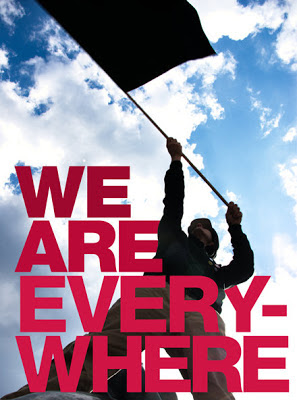 The people of Brasil finaly took the decisions to participate in the global protests AGAINST CAPITALISM AND GOVERNMENTS when the police used so much violence and really abused brutaly kids in the streets…
What happened in 13th in Rio was massive! We reached 10000 people in the streets and all the media was there, the journalists freaked out completely, this was totaly unexpected and it was great…
All these people revolting for all these hundreds of reasons!
We stayed until the end….and the weird thing is that after the first tear gas bomb, the hole crowd disapeared, everyone completely panic, even though it was a lot more safe then the Greek marches we have been, a lot less police, and total chaos…
We was wondering here with Void Network / Brasil about references for strategy….videos are easier for us to learn, we need it big time, we are growing big here, is amazing, and we will be present more and more, already meeting people doing staff around the corner….more and more people interested in creating…could you give us some practical references of what to do now that is becoming bigger and bigger and how we can fight back the tear gas?
Hope so, is trully beautifull all this chaos and the people waking up so big.
Lot’s of love!!
When We Fight we are Fighting for Our Lives!
We Won’t Live Like Slaves
for contact with Void Network / Rio De Janeiro section:
http://voidbrasil.blogspot.com/

p.s.
expect longer report from us during next days

After that we found a manual for direct action that oriented us a lot in how to deal with things, but still needing some strategies, people are not so scared now, but everything are still very new, so we don’t really know what to do… We have been sugesting some barricades/shielding once we have not seen even one here yet…

We was wondering about actions that could be done in the hours of the protests. People wrote “Brasil” in the entrance of the Tiradentes Palace — Rio de Janeiro’s Legislative Assembly (ALERJ) building here after we told them about the impact of it when in Athens people wrote “RESIST” in the poles of the Academia building… People here are very open and ready to do amazing new things for first time in their lives!.

This is how it started the march of the 13th of June 2013:
We heard all over the place that the police was been really violent to the students in the streets. We heard that it was a huge intervention of the police in the university campus and they were very brutal and arrested the students. Then we could feel the danger of the repression and decided to go and have a close look to what really was going on, took our cameras and went.
Arriving at the meeting point, the atmosphere was vibrant, young beautifull kids all around the place…there was maybe two dozens police officers for a crowd of what was told to be 10000 people .
6pm, the concentration was just about to start marching..
Looking back, behind the crowd, the scene was one of the most touching things of that night ; a group of students coming from school, they were 16 years old kids, a bunch of maybe 30 of them marching and shouting together for Freedom and Brazil, it was an incredible feeling… then the march started, people were so powerfully engaged, all together screaming to the rest of Brazil to come together to the streets such a young crowd, stunning. We marched together around the block, in the designed “allowed” area and everything was nice and lovely, there was no police nowhere…
After returning to the initial meeting point of the march, the people decided to take over the main road of the center of town. That’s when the police sent the first tear gas, and total panic happened, and all those people went nuts, and ran away…The whole crowd after that became maybe a bunch of 50 people, slowly building up again, but after an hour there watching the police dealing with the people (tiny “string” of  maybe 7 people holding arms together, and another little bunch here and there in the corners)  the police started gathering too big, so we decided walk away  to other possible meeting points. In our walk in the streets, we meet more youngsters, we were intimidated and provoked quiet a few times by different police cars and motor bikes. On the way back home police threatened us many times in body expression and faces, but as we was a small group of people we did not reacted back so they letted us alone at that night. …
In the bus back home we met a new bunch of people from where I leave really young and motivated.

We were chanting things like ” The People Woke up” and ” Reality is Hard”, “Globo Supported the Dictatorship” (“Globo” is our main tv channel, a massive empire that is now falling as well…), and our favourite is ” Come, Come,Come to The Streets Come” and “Against the Raisings”…

The next days the protests were really confrontational, police was throwing tear gas even inside the tube stations before people get to the meeting points…

So we went to the last big manifestation ( last monday) 17/03, with masks and vinegar for the tear gas, a loud instrument for music bang bang and first aid kit to help people survive and fight back…In the way already thousands of people were going to the manifestation with us, young students one more time.
This time we were massive, we were a never ending crowd of people, people in the offices of the city throwing strings of paper from the offices windows, making a rain of white paper above the crowd that was delighted with the office people flashing the lights inside the rooms participating with us. Everyone Woke up, everyone Realised, everyone said: Fuck you! That’s Enough!
So many people, so much power, but at this time, when they thrown tear gas, the people were screaming out loud ” Do not run!” “Keep calm!” so we stayed together for many more hours, banging things, making noise, being loud…lot’s of people stealing from small shops, and a few cars went burned.
The movement wants to take over the the Tiradentes Palace — Rio de Janeiro’s Legislative Assembly (ALERJ) building where there was some police inside. They were throwing stones and bombs in the doors of the building, and at some point, the police handed a white flag from inside one of the windows… the crowd went hysterical, but the worse is about to come, when we were all celebrating our achievement, from the same window plastic bullets were shot on the back of the kids…. in our backs after hanging white flag…Everybody went realy crazy!

And for a moment we spoke as one, we shout slow and calmly as ONE voice out loud “WE ARE ASKING FOR THE POLICE TO LEAVE THE BUILDING” it happened in a very organic way, and we spoke as one, and under that power dear friends, UNITY was born, and we could feel in our cells the bond we have to each other, and the power we can have TOGETHER.

People were hurt from the bullets and the crowd diminished, fire fighter trucks started driving thru the crowd to pic up the police from the building… After that there was a proper war that has been established there, the situation went nuts, friends are hurt, and the agenda of the police is really scary.

After some hours we decided to leave home before things went too nuts… it was all looking too strange… so we decided to walk away. We were about 6 blocks away from the protest when we saw a whole bunch of special police entering the ally way with their weapons on hand… they shot our direction a couple of times… we walked another 10 blocks away to the bus stop, and a police car went after us, and thrown a tear gas just by the bus stop… the young people freaked out of course.

Three people got shot from real weapons (not allowed here for the protests), one is in life danger.

People saw the tear gas was thrown on us was outdated, witch means even more chemical reactions from people.
But we are gonna stand there until the end.
Much love, and we will try do more analysis when we can.
Hope this text helps somehow, this is all we can remember