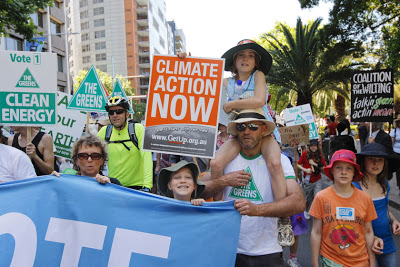 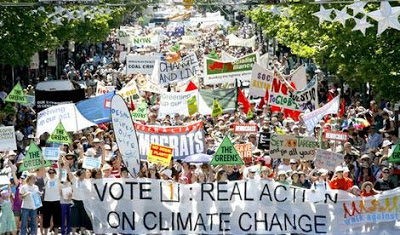 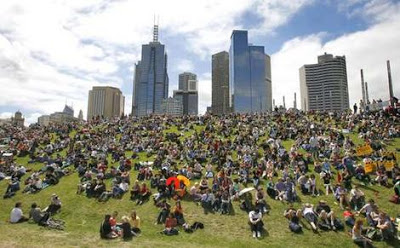 Tens of thousands of Australians took part in mass protests around the country on Saturday to call for tough government action on climate change, organizers said.
For the last three years every November happening huge demonstrations. The demonstrations were held as Australia prepares to set national greenhouse gas emissions targets, expected around the end of this month. Environmentalists accuse industry of pushing for targets that are likely to compromise the environment. Australia is the world’s 16th biggest carbon polluter, producing about 1.5 percent of the world’s global emissions. It is the fourth largest emitter per person, with five times the pollution per person of China. The center-left government will outline its preferred emissions following public consultations involving global miners such as BHP Billiton and power companies like AGL Energy. An interim framework in July led to business group accusations that steel, cement and papermaking firms would be forced out of business or to shift operations overseas to Asian bases where emissions costs were lower or non-existent. To ease concerns, Climate Change Minister Penny Wong and Treasurer Wayne Swan last month released Treasury modeling that found carbon trading would cut average per capita growth by 0.1 percent a year from introduction in 2010 to 2050, with only a small one-off inflation impact. The government has also promised proceeds from the auction of emissions permits will be used to compensate poor families and motorists for rises in the cost of fuel and electricity, which is mostly powered by burning coal. On Saturday, protesters took to the streets of Sydney, Melbourne and other cities, chanting calls for renewable energy and carrying banners with slogans such as “Renew our economy with strong targets” and “Turtles against climate change”. Cate Faehrmann, executive director of the Nature Conservation Council of New South Wales state, said the march came amid a background of pressure from the fossil fuels industry for the government to adopt relatively soft emissions targets. “When it comes to climate change you just cannot have half measures when it comes to targets,” Faehrmann said, adding scientists have urged targets that will limit global average temperature rises to two degrees Celsius. “There is not enough investment in renewable energy in this country. Job creation can occur there.” Australia was one of the longest holdouts against the Kyoto protocol, which Prime Minister Kevin Rudd finally committed the country to joining following his landslide election win last year, leaving the United States as the only major country not to have joined it.