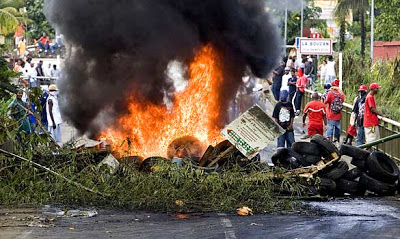 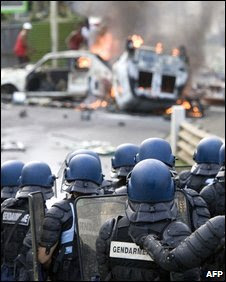 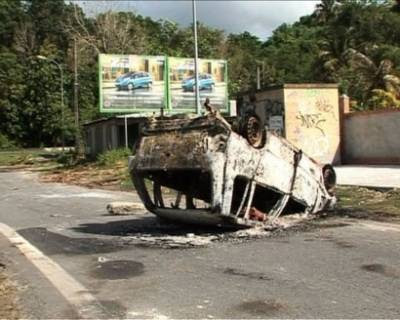 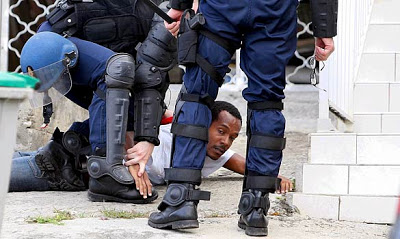 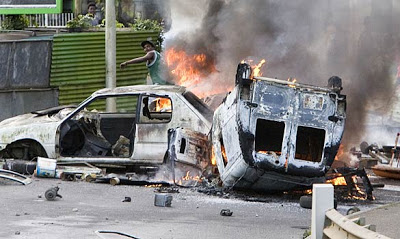 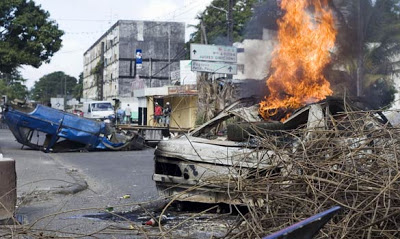 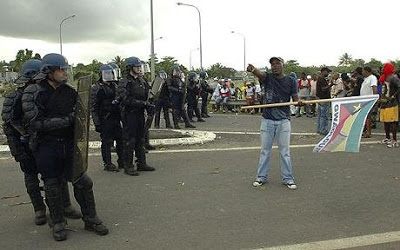 Guadeloupe, a part of France colonization history in the Carribean sea,
and a part of European Union, is paralised after one month of general strike
that started in January 20 as the focus of the riots has shifted away
from the immediate demands for better wages.
The starting cause of the strike is inequality and raising of the prizes, and the
people asking, nothing more than 200 euro pay increase for low-wage earners.
In last days the fights spread also to Martinica and Antilles.

According to AFP, “France dispatched hundreds of police reinforcements
to its Caribbean island of Guadeloupe on Wednesday as a month-long
strike over the rising cost of living descended into deadly riots.
Union representative Jacques Bino, aged in his 50s,
was shot dead overnight when he drove up to a roadblock manned
by armed youths in Pointe-a-Pitre, the island’s main city.
It was not immediately clear who shot him, but he was the
first victim of the escalating violence on Guadeloupe,
normally a tourist-friendly island
but crippled since January 20 by a general strike.
Six members of the security forces were slightly injured during
clashes with armed youths, police said.
French President Nicolas Sarkozy told a nationwide address
he would meet with elected officials from Guadeloupe on Thursday to
“address the anxiety, worries and also a certain form of despair from our compatriots.”
After holding an emergency meeting on the deteriorating security on the island,
Interior Minister Michele Alliot-Marie announced that 280 police reinforcements
would fly to the island immediately.
Gangs of youths looted shops, smashed storefront windows and threw up burning
roadblocks overnight along the main streets of Pointe-a-Pitre and
in at least two other towns. Fourteen people were detained.
Ary Chalus, mayor of the town of Baie-Mahault, where three police were hurt,
described the scene as “chaos.”
“We have 15-year-old children who are clashing with police.
We may well have families in mourning,” he warned.

Most shops, cafés, banks, schools and government offices have been shut in Guadeloupe
and the neighbouring tourist island of Martinique as a result of region-wide disturbances.

While both islands, which are formally integral to the French state,
are disadvantaged compared to the mainland, the standard of living
is much higher than in the former English and Spanish colonies in the Caribbean.

Guadeloupe’s socialist opposition leader Malikh Boutih said: ‘It is shocking to
watch a police force which is almost 100 per cent white confront a population which
is 100 per cent black.

‘All the same elements of the riots on mainland France in 2005 are present here.

‘We don’t have the same concrete buildings, there are palm trees instead,
but it’s the same dead-end, the same “no future” for young people,
with joblessness and a feeling of isolation.’
The violence has provoked divisions in Mr Sarkozy’s cabinet with black minister Rachida
Data acknowledging that Guadeloupe suffered from “a problem with the distribution of wealth.”

Guadeloupe is a French overseas department ruled directly from Paris, and
authorities in France have sent 300 extra riot police to the island in a bid
to quell the violence.Meanwhile, hundreds of protesters are roaming the streets
of the capital Point-a-Pitre, looting shops and restaurants, burning cars
and vandalising public buildings.

Holiday resorts along the coast have hired extra security to protect tourists,
while the airport is jammed with visitors now trying to get out of the country.

Union leader Jacques Bino was the first man to die in the violence when he was
caught in crossfire on Tuesday while driving a car near a roadblock manned by armed
youths who had opened fire at police.

Six members of the security forces were injured during shoot-outs with the armed
youths as they tried to help emergency teams who were trying to save Mr Bino’s life.

Dozens more police and demonstrators have also been hurt in frequent clashes on
the capital’s streets—which one newspaper describing it as looking like a battlefield’.

first info for this article came from:
http://riotstorebellions.blogspot.com/
as also the Greek site:
http://globalnewswire.wordpress.com

photos comes from AFP and Reuters