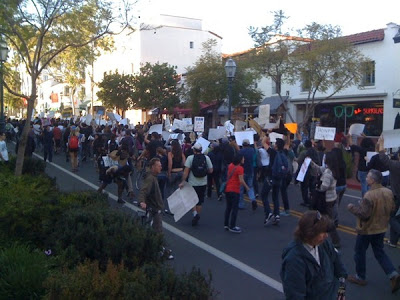 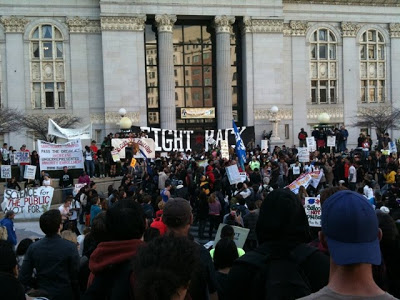 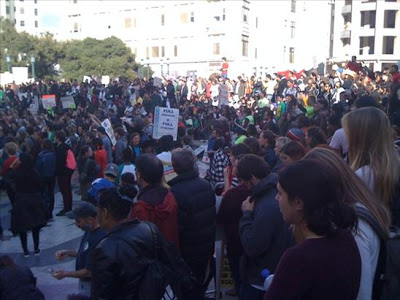 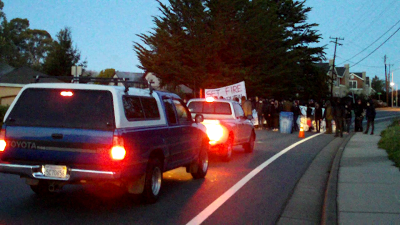 Inside a commandeered university building, we gathered, we spoke, and we conspired. Outside the police waited, they observed, they plotted. They were in no way prepared for the wave that came crashing down, and neither were we.
While there seems to be endless conversation on the violence of smashing windows and the damage to the movement done by spontaneous action, there is a notable absence of discussion of the violence of class division in american society and its relationship with higher education.
Is the movement so fragile that a smashed window destroys it, yet broken bodies don’t bring it to the boiling point. We are told that the streets must be policed in order to be “safe.” That no one will join us and that people who would’ve supported the cause are now frightened to participate. Yet what we see is laughter, dancing, and a freedom that is impossible to describe in the language of everyday capitalism. How, we must ask, is a movement that collapses under the weight of overturned trash cans going to withstand the presence of millions of people challenging their relationship to the economy? A structure that collapses in the rain will not withstand the earthquake.
The worry of a potential alienation of workers and students is disproven by moments like this. Where the underlying collective hatred of the police and those that manage the living social order is acted upon. The students, the kids at the bar, the street kids on Telegraph, the rioters, they do not alienate, they are alienated!
That is why they throw parties in the streets, that is why they burn what they touch, that is why cars are smashed, dumpsters are plowed into police lines, windows are broken, and people ghostride through the smoking streets.
Our roles as anarchists and organizers, communists and radicals, dissipated as the situation took on a life of its own. This is what happens when the conflict truly spreads beyond the university and its sanctioned student groups, when people become involved on their own terms. A dance party becomes a protest, becomes a party again, transforms into a riot and back again into a party.
This is the coveted mass movement! The point where people question their roles and identities as students, as street people, as jocks, or as activists.
Walkouts in September, occupations in november, riots in the streets in February and March. This points to nothing less than the willingness of participants to exceed the boundaries of expectation imposed upon the movement. We must refuse to allow anyone to split the movement, to divide it along the lines of what the police, the administration, the professional activists deem acceptable. Those who deny the sudden and spontaneous awareness of the Berkeley rioters regarding the role of police, or the arbitrariness of property relations, desire nothing else than the reintegration of the movement back into politics.
A movement moves forward on its own volition, exceeding the expectations of both its enemies and its participants. The role of those that find themselves caught in the middle is to develop along side it. There is an enigmatic quality about March 4th and no one can foresee what will happen. We eagerly anticipate this uncertainty.